SDCC 2012: What We Now Know About ELYSIUM 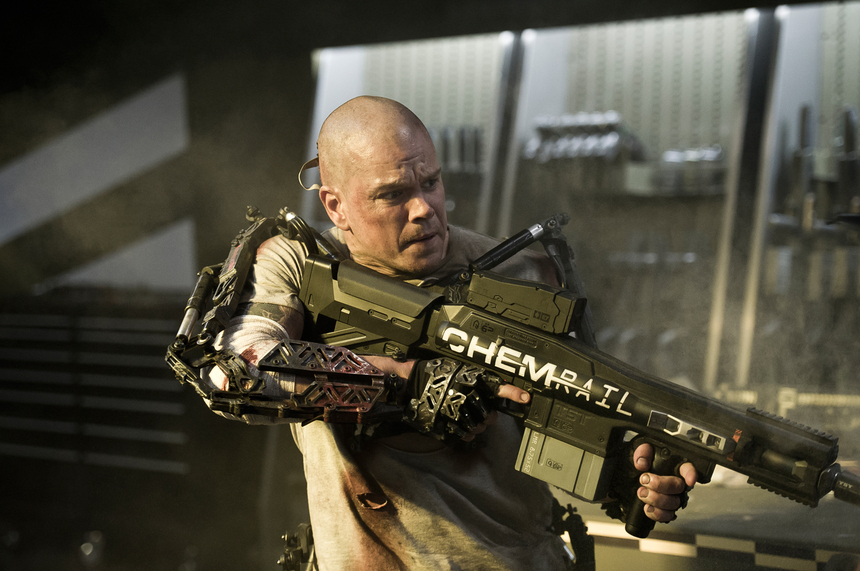 Up until now, details have been pretty scarce about Neill Blomkamp's District 9 follow-up sci-fi actioner ELYSIUM (see what we knew already). That all changed yesterday in San Diego Comic Con's massive Hall H when Sony rolled out seven minutes of footage from the film, temporary CGI in place, for the very first time. Blomkamp was on hand to chat for a bit with stars Matt Damon, Jodie Foster, and Sharlto Copley. Here are all the details we were able to glean from the footage about the plot, the characters, and the world. This is pretty much all circumstantial and there may even be a conclusion or two jumped to, so take it with a grain of salt. What we saw could certainly still change. Oh, and if you're the kind of person who likes to go into a film knowing absolutely nothing, you'll probably want to browse on now. SPOILERS MOST DEFINITELY AHEAD!

As has been previously revealed, the story takes place in the year 2154. Humanity has been segregated into the "haves" on a utopian space station called Elysium, and the "have-nots" left below on a dying Earth. Earth looks a lot like the dry, hot slums of Blomkamp's District 9, though the film was shot in Mexico as opposed to South Africa. Elysium is a beautiful halo of greenery and blue waters revolving endlessly in orbit. Most of the Elysium footage was pre-render temporary CGI, but the few shots that were finished looked gorgeous.

Matt Damon plays Max, a sarcastic tongued convict we meet as he is assaulted by security droids for not complying with a routine search and then threatened by a graffiti adorned parole-bot that denies his parole as a matter of routine. We don't know what Max did to get in trouble with the law but the impression is that Earth is pretty much one big prison and everyone left there is repaying some sort of debt for a minor transgression. His punishment is manual labor in some kind of plant that deals with radioactive materials.

Things get really bad for Max when an on the job mishap (his foot gets stuck, perhaps) finds him on the wrong side of some big lead doors during a radiation exposure. A medical-bot tells him, with no great fanfare, that he has five days to live. There seems to be just one option left to Max: get to Elysium (apparently they have the technology to cure him there).

Max's journey to Elysium begins by visiting one of his underworld pals who sits in front of a wall of monitors, ostensibly possessing some sort of big-wig roll in this den of thieves. This guy can get Max to Elysium, but it ain't gonna be easy.

The plan (and this is where things get a bit more hypothetical) involves some painful surgery that includes cutting a chunk out of Max's skull and essentially turning him into a killer exo-skeleton clad cyborg. He needs this because it is up to him (and perhaps another pal) to pull off a heist on the brain data of an Elysium resident played by William Fichtner. What Max needs to get from Fichtner's character's brain is a bit unclear. It may have something to do with being able to hack inside and control him remotely, but it more likely is just the gate code to land the spaceship (that they also need to steal) on Elysium.

There is an extended set piece when Max attacks the red and black hover car that has been used in early Elysium promotions. Inside sits Fichtner's character who seems unworried about the attack until an enormous hole is blown in the side of the car by Max. Fichtner's character orders his high powered warrior-bots to attack Max (and his pal(s)) but Max prevails and gets the brain dump. However, Max and his pal with the monitors get more than they bargained for because Fichtner's character was apparently carrying data in his brain far more important than just the landing codes. He had the whole plans to the Deathstar! Wait, not those. But Max does apparently end up with data that could be used to crash Elysium to Earth.

This is where things get really fun (or perhaps this takes place before the Fichtner fight scene) because once Max is identified as a threat, Elysium's top boss Secretary Rhodes (Foster)calls out the big guns to take him down. Those big guns come in the form of an earthbound bounty hunter played by District 9's Sharlto Copley who dons a uniform that makes him look like a hobo-samurai and throws highly explosive shurikens. These guys fight with all kinds of cool weapons and energy shields. They fight a bunch, it would seem. They fight on earth and from the looks of things, they fight on Elysium too (but I can't be too sure about that one). Regardless, Copley's character is badass (so is Max in his exoskeleton, by the way), and the character design on these guys looks like it will be one of the film's most impressive elements.

This is about the extent on what we currently know from the footage. What starts as a selfish mission for Max to save his own life, obviously takes on bigger meaning at some point (there is footage of a woman begging Max to take her sick child to Elysium where they will save her). But how the story proceeds from there is anyone's guess.

Without a doubt, this looks like it will be one of the most visually interesting films of next year. I don't think that comes as a big surprise to anyone based on what Blomkamp achieved with District 9. There is still a long wait ahead, but we are certainly hoping he can deliver in the satisfying story department as well (an element that some were critical of in D9). It is hard to be too sure from seven minutes of sizzle, but one thing is absolutely sure, those seven minutes had a lot of heat.

We'll be here to deliver every morsel of news, just as soon as we can scoop it up.