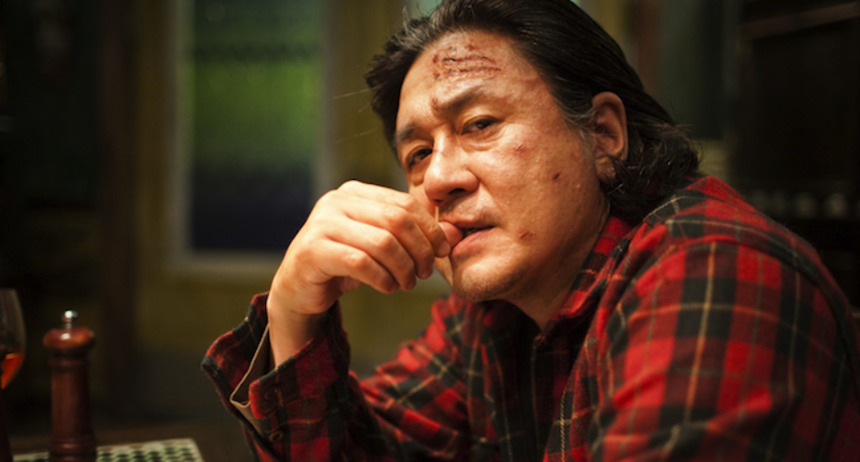 For those not in NYC for the 2012 New York Asian Film Festival, the treats keep on rolling in. Today, our correspondent The Lady Miz Diva brings us a one-on-one with the legend himself, the man with the hammer, Mr. Choi Min-sik. This interview is being cross-published at Diva's own site The Diva Review.


The Lady Miz Diva:  Welcome to New York City.  I understand it's not only your first visit to our city, but to the US.

LMD:  What do you think so far?

CM-s:  I love jazz, so I went to the Blue Note to see Cassandra Wilson.  I also went to {the Broadway play} A Streetcar Named Desire.  There's all these great foods and all these fantastic festivals.  That's New York.  One more thing; it's so hot outside!

LMD:  Having never been to America, what's it like to be here experiencing your fans enjoying your films at the festival?

CM-s:  I felt it was so good to be an actor to share the messages of the films and the emotions of the films before this audience.

LMD:  I think most people in the West primarily know you from playing Oh Dae-su in Oldboy.  It's almost ten years since the film was released, why do you think it resonated so strongly with worldwide audiences?

CM-s:  The subject of Oldboy is really universal.  I know a lot of violence is there, but still it's really a very human tragedy, so that a lot of foreign audiences from different culture bases can all understand the messages all together.

LMD:  One of the movies playing at the festival is Nameless Gangster.  What drew you to this role?

CM-s:  Actually, though Nameless Gangster looks on the surface like a gangster film, it actually reminds me of the story of my father.  That character, he's a total underdog and outsider trying to support his family, but he still wants to be the father and head of the family.  So, the children always love him and understand why their father is so different outside, but at the same time, they kind of hate him.  So there's a mixed feeling of love and hate at the same time.  Also, the children kind of feel so sorry to their own father 'cause they understand how difficult it is for him.

LMD:  Fans overseas read about your time away from acting and while there were different reasons given, it seemed to come back to your dissatisfaction with the Korean film industry?  What do you think is the best situation for Korean film to flourish and thrive?

To make the Korean film industry flourish more, of course we need more support in terms of policies from the government, economically, but eventually all the crews, including directors and actors should try harder and do their best to make the best films ever.  So that is the best thing to make the film industry succeed better.  We should focus more on fundamental problems, especially when the circumstances are tough and complicated.

LMD:  As an actor who has achieved your level of fame, do you feel a responsibility to speak out about issues that are important to you?

CM-s:   I totally understand my responsibility as a celebrity; I know that my voice has power.  Still, when I think when something is right, I should make my own voice.  I should raise my voice for the righteous.

LMD:  What was it like for you to come back after such a long time, in terms of your approach to acting?  Did the time off screen give you a different perspective or change anything in the way you approached being on the set?

LMD:  I had the pleasure of interviewing Kim Jee-woon, the director of your big comeback film, I Saw the Devil.  He quoted you as saying that acting in that film was like "the shit I didn't take for a long time."  Can you elaborate on that?

CM-s:  It's not easy to draw out the core of the characters all the time.  To express one-hundred percent of the character, it takes time, so that's maybe why I said that. {Laughs}

LMD:  Why did you choose that film as your big comeback?

CM-s:  I was so fascinated by the scenario itself.  That's not saying I like murders, but I just liked it so much, I couldn't say no.  Even though I didn't agree one-hundred percent of the representation of what was on the screen, the first draft of the scenario was really perfect.

LMD:  You're very much known for playing either dark characters or characters in dark situations.  Do you ever want to try to do something completely different like a musical or a comedy?

LMD:  You've worked with so many great Korean directors, like Kim Jee-woon and Park Chan-wook, and amazing young directors starting out.  Director Kim told me you actually brought him the idea to do I Saw the Devil, which made me wonder if you'd ever thought of directing or producing a film of your own?

CM-s:  I'm not really interested in producing, but as an actor, my future dream is to direct a film by myself.  But that's a very long future story at this point {I would do it} after I learn a lot as an actor.

LMD:  It's interesting to hear that you are in favour of the American Oldboy remake.  Would you consider appearing in it if you were offered a part?

LMD:  Have you ever wanted to make films in the West?

CM-s:  I'm aware of the difference between directors and actors.  Directors can do that even though the language is different because their work is to conduct the crew and sets and scenes, but actors have to actually use their own tongue. So if you're not a native, it's going to be really awkward even though you have lived a long time in that country, the language is still not perfect.

LMD:  What are you working on next?

CM-s:  I'm a police officer in New World {Sinsegye}.  Right next to New World is the  Battle of Myeongryang, Whirlwind Sea.

LMD:  And when are you coming back to New York?

CM-s:  {Laughs} If the New York Asian Film Festival ever invited me again, I'd be willing to have an interview with you.

Love this interview! And yes, I do think Choi Min-Sik would be great in a comedy.