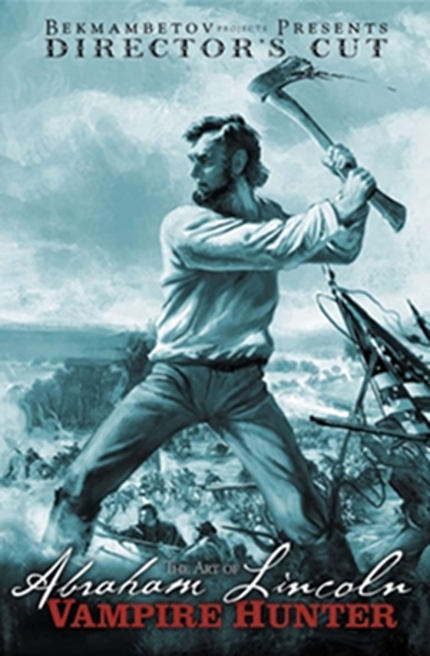 Director Timur Bekmambetov has a little treat for fans. With his Tim Burton produced adaptation of Seth Grahame-Smith's Abraham Lincoln: Vampire Hunter hitting screens on June 22nd Bekmambetov is releasing a book of concept and storyboard art. On it's own this is not particularly unusual, there are lots of these things around these days. What makes this different is what justifies the Director's Cut tag: This isn't just art from the movie, it's also art for sequences that were dreamed up but could not be included for various reasons. The film hitting the big screen? That's Bekmambetov's film as it actually is. The film presented in this book? That's the film as it could have been.

I have a copy of the slim hardcover on my desk as I type this and it's a handsome bit of work. The artwork is beautiful, printed on glossy heavy stock paper, taking you start to finish through the story. How does it vary from the film? the biggest change is that the book tells the story entirely from the perspective of the vampire Adam, beyond that I'll have to check back in after seeing the finished product before weighing in on that but there is copious blood, violence and nudity on display here.

Also of interest: A few pages of art at the end of the book promoting what looks to be an original new graphic novel series from Bekmambetov's fledgling graphic novel imprint. Titled Warriors Of Oz it promises a kinetic, post apocalyptic hyper violent spin on the Frank Baum classic.

If you want a taste of what lies within, take a look at the trailer below. And you can click here to reserve a copy now.
Tweet Post Submit

Do you feel this content is inappropriate or infringes upon your rights? Click here to report it, or see our DMCA policy.
Timur BekmambetovSeth Grahame-SmithBenjamin WalkerDominic CooperAnthony MackieMary Elizabeth WinsteadActionFantasyHorror