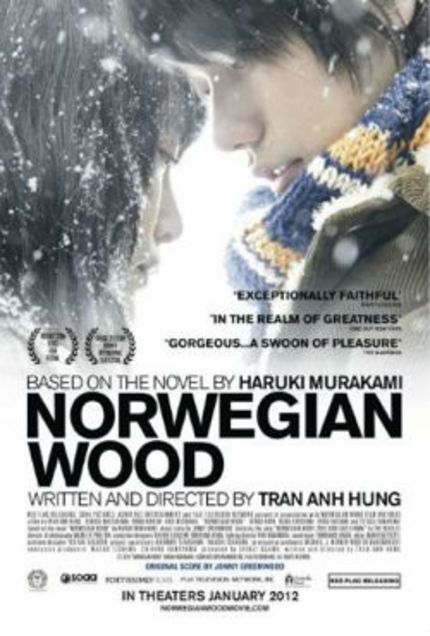 I'm not really the biggest Anh Hung Tran fan, but I do follow his work from a distance. While not truly spectacular, I appreciated the soft-natured atmosphere of Mua He Chieu Thang Dung, Xich Lo on the other hand was somewhat of a disappointment. But when I heard Tran was going to adapt a book of Murakami, I was pretty excited to see how he would blend his Vietnamese roots with the Japanese setting. The result is nothing short of amazing.

Norwegian Wood is a well-known novel by Japanese author Haruki Murakami, one of the few Japanese writers who actually managed to acquire an avid following in the West. The book itself took its name from a lesser known Beatles song. I haven't read the book myself, which is actually an advantage when watching a film adaptation as it doesn't set any false expectations. People in the know told me that Tran changed some things around though, so be warned that it's not a word-for-word adaptation.

What the film lacks in depth of secondary characters, it regains by focusing quite heavily on the main love triangle. We follow Toru as he travels through the harder parts of puberty. Toru falls in love with Naoko, who has a hard time dealing with the suicide of her former lover (who just happened to be Toru's best friend). Even though Toru and Naoko are quite intimate, Naoko disappears from view as she moves to a recovery clinic in the hills. Toru feels responsible for Naoko, but long distance relationships are hard at such a young age, especially with someone who has serious mental issues.

Toru also meets up with Midori, a young, somewhat extravagant girl who flirts with him even though she's in a relationship herself. Toru is torn between these two women, unable to balance his feelings of romance and responsibility. Student protests from the background of Toru's emotional struggle, though they appear mostly during the beginning of the film, around halfway through Tran keeps a very rigid focus on his main characters and he doesn't let go until the very end of the film.

Visually Norwegian Wood is almost impeccable. It's great to see Tran's own style blend with Japanese traditions. The outdoor locations are truly stunning, camera work and lighting are stellar too. But it's the way Tran uses short, often unrelated scenes to express the character's emotions which is truly captivating. There is one scene in particular that stayed with me long after the film, Naoko and Toru facing the wind, huddling together for protection. No dialog is needed to bring out their deepest emotions, a supreme example of visual storytelling.

The soundtrack too is great. Of course there are some classic hits to help with building up the whole 60s atmosphere, but it's the original score that really sets it apart from traditional Japanese dramas. It's not as subtle, often dictating the atmosphere of a scene, but never too sentimental or cheap. The best piece is near the end of the film, completely unsettling and quite difficult to sit through, but definitely worth the challenge. The soft-voiced dialogs on the other hand make for a warmer atmosphere and contrast well with the soundtrack.

Taking up the role of Toru is Ken'ichi Matsuyama (Usagi Drop). Even though I wasn't a very big fan of him before, he is really cut out for sweet, delicate characters and he manages to carry the film with deceptive ease. Naoko is played by Rinko Kikuchi (Babel), Midori by newcomer Kiko Mizuhara. Both of them are superb too, making for a young and remarkably strong cast.

Norwegian Wood holds a delicate balance of drama and romance. Even though the film can get quite heavy at times, there is always a silver lining to keep the warm atmosphere alive. The ending may be a bit easy, wrapping everything up a bit too comfortably as to leave the viewer with a contented feeling, but apart from that little glitch (and I must admit, it did feel good) there is little wrong with this film.

Norwegian Wood is the first Tran film I truly loved. It's beautifully shot, wonderfully scored and aptly acted. It scores well in just about every department, showcasing the progress Tran has made as a director. With this in mind I'm really looking forward to Tran's next film and I'll probably catch up with his previous film I Come With The Rain too. Norwegian Wood is perfect material for fans of Japanese drama films who are looking for a different spin on the genre, it's very Japanese but clearly made by a non-Japanese director. This often results in an uneasy mix of two very different worlds, but in this case it works out extremely well.