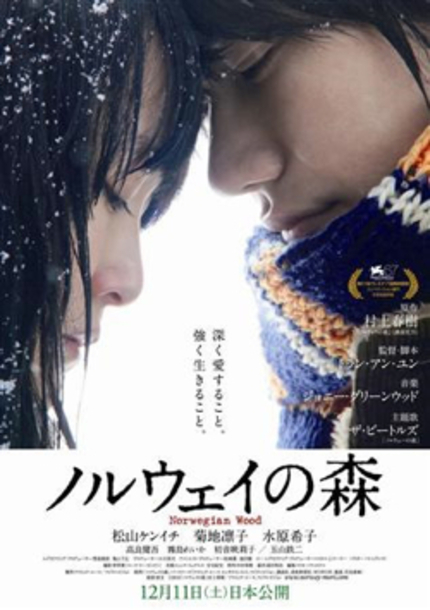 Although a fan of the writings of Haruki Murakami, I never really gelled with NORWEGIAN WOOD, arguably his most popular novel. Give me the surrealist eccentricities of HARD-BOILED WONDERLAND AND THE END OF THE WORLD or A WILD SHEEP CHASE any day over the frustrating adolescent melancholy that permeates through this nostalgic reminiscence of 1960s Tokyo. Because of this, I only read the book once, and it was a few years ago now, so after watching Tran Anh Hung's new film adaptation, my initial reaction was that it was a mostly accurate adaptation. I was instantly overwhelmed by the depressing tone of the film, which I did not remember being present in the novel, but on the whole each plot point rang a vague bell as it played out on screen. That said, I subsequently took the opportunity to revisit the novel and in doing so exposed a number of subtle, yet notable, differences between the two tellings of the story.

Firstly, the film version of NORWEGIAN WOOD is set entirely during the 1960s and makes no reference to being the nostalgic flashback of an older man that frames Murakami's novel. This decision doesn't affect the outcome of events in any significant way, but renders the film's title utterly redundant. In the book, the protagonist Watanabe Toru hears a rendition of the classic Beatles song "Norwegian Wood," which instantly reminds the 37-year-old of his university days, and particularly his bizarre relationship with the deeply troubled Naoko. The song was Naoko's favourite, and hearing it again many years later catches Toru off-guard, transporting him back in time 20 years and forcing him to relive many painful memories that had presumably been suppressed, and for good reason. Although the song does appear twice in the film, once sung by the character Reiko, and then the original studio version over the end credits, it loses all meaning when not positioned as an emotional trigger.

Instead, NORWEGIAN WOOD is presented as a straight-up teen romance, albeit one with a period setting. The student protests that feature so prominently in Murakami's novel are little more than authentic set-dressing in Tran's film and the characters all but ignore the volatile situation that surrounds them. While some might argue that this is intentional and highlights how intoxicating and all-encompassing their relationships have become, it's a fairly weak theory. In truth Tran seems simply more interested in the romance than the politics and keeps the 60s setting purely to assist the mechanics of the story, as well as afford lead actor Matsuyama Kenichi the opportunity of sporting a wide array of snappy shirts.

For those unfamiliar with the plot of NORWEGIAN WOOD, it centres on three high school students, Toru (Matsuyama), his best friend Kizuki (Kora Kengo) and Kizuki's girlfriend Naoko (Kikuchi Rinko). A tight unit throughout school, their happy triumvirate is shattered when Kizuki inexplicably kills himself on his 17th birthday. Toru and Naoko remain friends and later both attend the same university in Tokyo. Naoko struggles to cope with her grief, becoming increasingly unstable, all the while growing closer to Toru. They eventually sleep together, but Naoko immediately drops out of college and checks into a sanitarium. Toru remains in contact as best he can, even venturing out to the countryside to visit Naoko on occasion, but back in Tokyo he begins to fall for his bubbly, outgoing - and seemingly far more normal - classmate, Midori (Mizuhara Kiko). Toru also maintains correspondence with Reiko, an older female patient who becomes Naoko's best friend at the hospital. She keeps Toru updated with her progress (or lack thereof) but eventually even their relationship becomes complicated and boundaries are eventually crossed.

While not entirely in-keeping with the tone of the novel, the film of NORWEGIAN WOOD works best when plowing the emotional depths of loss and despair. Kikuchi Rinko is particularly effective as the increasingly unhinged and fragile Naoko, who becomes a ticking time bomb of self-destruction who must be kept on suicide watch at all times. Her frequent reckless rambles through the wintry forests that surround the hospital provide Tran with the perfect setting for some truly gorgeous camerawork that captures the isolation and devastating sense of helplessness that is constantly threatening to send Naoko over the edge. One particularly memorable scene follows Naoko and Toru as they march back and forth through a windswept field of tall grass, using a single 3-minute tracking shot to capture their argument. Toru is literally battling the elements in his attempts to control and pacify Naoko, while she remains as willful, erratic and untamable as the breeze. This is heightened all the more by the film's soundtrack, in particular Johnny Greenwood's emphatic score - at once ethereal and confrontational in its execution.

NORWEGIAN WOOD is not a bad film by any stretch, and purely on a technical level it proves to be quite the audio-visual treat, but for me Ichikawa Jun's TONY TAKITANI remains a superior example of capturing "that Murakami feeling" on screen. For all its aesthetic achievements, Tran's film is also a grueling emotional ordeal that will leave its audience desperate for a swift and painless passport into the great Hereafter. The performances are note-perfect for what the script asks of them, but the adaptation itself lacks Murakami's lightness of touch and beat-poet stylings that single him out as an author worthy of global recognition. That said, I also found the novel to be tinged with a sadness and somewhat mundane realism at odds with the eccentric and fantastical elements that make the rest of his oeuvre so attractive and compelling, but with more than 12 million copies sold to-date, I may well hold the minority opinion.