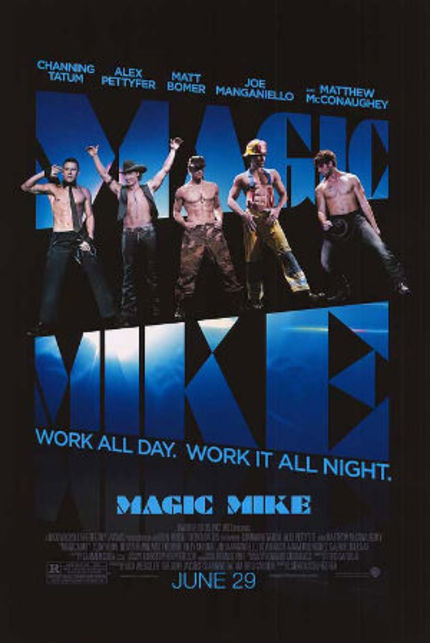 "What is the opposite of a sausagefest?" I wondered whilst eyeballing the crowd at an advance screening of Magic Mike. One couldn't help but notice the inordinate number of females in the theater. I had no idea that director Steven Soderbergh was this popular among women (of all ages, apparently).

The film's title refers to construction worker by day/exotic male dancer by night, "Magic Mike", played by real-life onetime stripper (turned actor and producer) Channing Tatum. Mike is a truly, decent, affable guy who works multiple jobs in order to make his own American dream of being a custom furniture maker come true. He's a street smart hustler with heart who befriends young, down-on-his-luck Adam (Alex Pettyfer) by taking him under his wing and introducing him to the not-entirely-glamorous yet totally seductive world of male stripping. It is here we meet the Svengali-like veteran leader of the troupe, a domineering yet unfailingly charismatic dancer named Dallas (Matthew McConnaughey).

Story-wise, the film breaks little new ground and struck me as a melange of Coyote Ugly and Flashdance, with perhaps a touch of Boogie Nights. My own experience of male stripping starts with Chippendales dancer wannabes Patrick Swayze and Chris Farley going at it to Loverboys's "Working for the Weekend" in a classic Saturday Night Live skit and ended (abruptly) in a gay disco that featured a naked man in a shower performing a gymnastics routine that would have left Mitch Gaylord in awe. While I've been to plenty of peeler bars and seen my fair share of burlesque, my desire to see hairless men synchronize their gyrations and pelvic thrusts to "It's Raining Men" has been limited. It's never struck me as something I'd want or need to see.

That being said, Magic Mike may be the most fun I've had at the movies in 2012 thus far.

Soderbergh has managed to take what others would have turned into a cheesy romp to another level entirely by playing it, ahem, totally straight. Focusing on Mike, the everyman caught squarely in the middling crossroads of his present-time grey-zone, between young ingénue Adam and has-been Dallas, the story plays out against an unfamiliar and potentially awkward setting of male sexuality that is erotic and explicit yet inherently farcical. The film acknowledges this by carrying any unease with a direct nonchalance; during one scene it took me a moment to realize that that funny-looking thing bisecting the screen was a giant penis in an "enlargement" device.

Classic symbols of America, from the flag to Uncle Sam, routinely crop up to underscore the motivation behind what it is that these men are doing; we see them as real, serious and entrepreneurial, thus tempering and mitigating our judgement and any preconceived notions of them or their chosen avenue for employment. They are men, they are strong, and they don't need our sympathy: Magic Mike is very much a movie about a distinctly male experience, and it could never have played out the same way if the dancers were female. I found myself compelled by both the film and my own reaction to it, which to my great surprise, left me as psyched as a night out to see a bunch of male strippers might. I am guessing that this is what will keep many men away from the film.

Strong supporting performances by Pettyfer, as well as Olivia Munn and Cody Horn as Mike's love interests, provided enough structure and believable chemistry to a film that managed to move along at a surprisingly swift pace despite being relatively shallow everywhere else. I was left with a few questions that were never really addressed in the film, specifically the lack of any reference to homosexuals, homosexuality, or homophobia - an aspect likely to inhibit many straight men from wanting to see the film. As much as some women may enjoy male strippers, I have it on good authority that gay men (especially) prefer seeing straight men dance to gay ones; it was interesting to me that none of the characters featured in the troupe were (obviously) gay and that there seemed to be no gay men partaking in their audience. Avoiding the particulars of sexual and gender dynamics in that regard struck me as odd.

Though Tatum's earnest, "aww, shucks" cuteness is a great balance between strength and tenderness, any fine acting moments are objectively eclipsed by his amazing moves and magnificently beefy body. It is no secret that he spent time as a male stripper before Hollywood found him and while I do have mixed feels about him as an actor, he manages to convey a level of authentic sex appeal that would have eluded, say, Justin Timberlake. And make no mistake - this man can dance. His physicality is a highly unusual mix of a graceful, controlled elegance and electric masculinity, evocative of Gene Kelly in his heyday.

But as fantastic as Tatum is and every one of the dancing scenes are, the true star of Magic Mike is Matthew McConaughey who steals the show by taking his sexy bongo-playing Texas charm to heights that Tom Cruise could only ever dream of.

"Own it. Who's got the cock? You do!" he instructs young Adam during rehearsal, without a hint of self-awareness. Throughout the film he repeatedly utters his trademarked "Alright, alright, alright," offering legions of women who will watch Magic Mike on DVD in perpetuity the best parameter for a drinking game they will ever encounter. The underlying seedy tension of this enterprise of skin-trade is revealed by the time we see Dallas cloaked in nothing but a gold thong and a layer of sweat, slithering onstage in a sea of one dollar bills tossed at him by screaming housewives, taking a final bow with his ass projected to us, at us, in our collective face. McConaughey has never been, nor likely will ever be, better.

Magic Mike works hard by doing a lot with a little, but despite Steven Soderbergh's direction, some truly funny moments and it being 2012, I predict that Laura Mulvey's theory of the Male Gaze will hold firm, reflected by the bulk of the film's theatrical audience being hordes of women (aka clambake, taco fiesta).