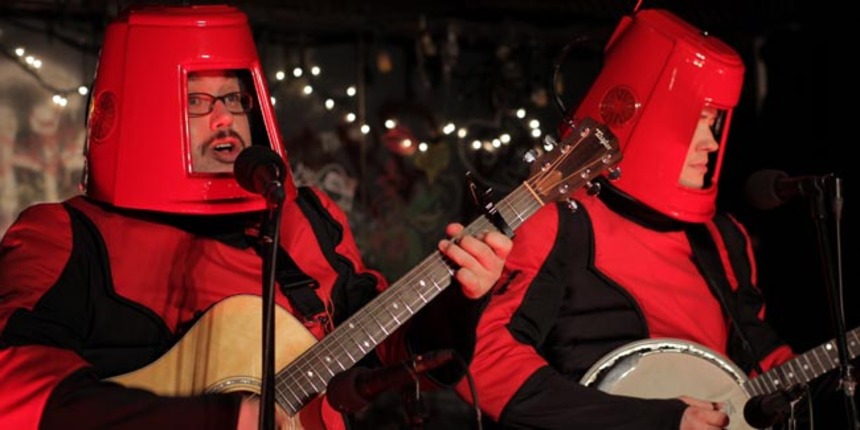 After seeing a couple stills in the festival guide, sci-fi comedy THE HISTORY OF FUTURE FOLK immediately became one of my most anticipated films at the 2012 Los Angeles Film Festival. Flight of the Conchords is a natural reference point if you've got two attractive outsiders acting and singing in a more magical Brooklyn than we're all used to, but the similarities pretty much end there. THE HISTORY OF FUTURE FOLK is sweet and charming, a colorful little story about a couple of bluegrass-playing space aliens from the planet Hondo who learn to live and love on Earth.

After THE HISTORY OF FUTURE FOLK's LAFF premiere, we spoke with co-director/screenwriter J. Anderson Mitchell, co-director/producer Jeremy Kipp Walker and actor Jay Klaitz (The Mighty Kevin) in the snack bar of the L.A. Athletic Club. Unfortunately co-star Nils d'Aulaire (General Trius) couldn't make it. For good reason, though--his wife was having their baby!

ScreenAnarchy: Why did you decide to make a movie about bluegrass playing space aliens?

J. Anderson Mitchell: The inception of the film was kind of funny--Jeremy and I were working on another project that was very close to going. It was much bigger budget and we were relying on much bigger actors but things fell through, as they sometimes do, and it had just been years since we had rolled up our sleeves and made a movie together. So we said, 'Fuck it, let's just get something done, whatever it takes.' It was actually Jeremy's recommendation that we do something with Future Folk. Future Folk are our friends--we weren't like random fans; we went to college with Jay--and then we met Nils later down the road. We've been friends for years now so it was a lot of taking stock and figuring out what we could go out and shoot right now, tomorrow.

Jeremy Kipp Walker: I come from a line-producing background. I asked John, 'What do we have?' We had a house--we share a two family house, the house in the movie--and that became our studio. We shot three interior scenes in there and got a couple of 5Ds that we had in my office and we basically just rallied the troops. The band had a bunch of music that we were able to use and they wrote some new songs for the movie too. It was twelve years of favors cashed in.

Mitchell: I went into the screenwriting process and it just kept getting bigger and bigger. It's a big indie--a big low-budget movie, which is a testament of Jeremy's producing skills and ability to bring in favors like that.

Walker: Jay was in ROCK OF AGES, the musical with Dee Snider, and Dee came on to play Larry, which was a lot of fun.

What was the biggest favor and the hardest to rein in?

Walker: The hardest was this guy! [Points to Klaitz]

Klaitz: That was a daily thing! I got a bad rap.

Walker: No, Jay's a professional, we're just joking. The hardest thing was actually the nuclear missile silo. We were really terrified that the whole conceit of the movie wasn't going to play, or it'd feel very thin. We had the house, we had the bar, we had the streets, but we couldn't find the place where we were going to launch this nuclear missile from. We actually found this great museum in Arizona--a former nuclear silo--and it was pristine. But they wouldn't let us shoot there! It's part of a national park and the park was fine with it but it was administered by the military because all of their stuff is still in it. We got very high up the bureaucracy and it seemed like it was going to happen but then they didn't let us. Then that led to the discovery of this great aerospace museum in Long Island. It was the complete opposite--it was 45 minutes away, had everything we needed, and they gave us the run of the place for four days. The only thing they didn't have was the real under-workings of the missile base. We did finally find a place in South Dakota, another one of these museums. They did let us shoot there. That was a down-to-the-wire thing, the last piece we needed to make the movie.

Mitchell: At the end of the day I think that aerospace museum is three different locations. But it works, I think. I don't think you question it. Just the plot and the characters! We wanted to do this sci-fi movie, but we wanted to do it on the cheap. Obviously the story is dictated by where they're from--which is outer space--and obviously we can't shoot in space, we don't have spaceships, we can't afford any of that, but our theory in attacking the project was that it was like a radio play. So you're always hearing about outer space and you see little tidbits here and there but they're never actually flying through space. There will never be a camera in space. You'll never see a comet.

Walker: Epic story but all told through a very subjective point of view. That's why you have the little girl drawing outer space. Obviously it's a silly movie and you need to suspend your disbelief for a little bit but I think as filmmakers we felt the burden to never give completely over to camp--to try to ride the tone enough so you're invested in the film and not puncture the production value. You can still be comic and somewhat silly but at a certain bar hopefully.

When did you start working together?

Walker: The three of us went to college together at Becknell. We all studied theater and English together. John and I came to New York after and got jobs at Woody Allen's production company. We felt like we made it but it ended up being more hanging out at the copy machine and answering phones. It was totally great and fun though--we got to go to the screening rooms. Then I got recruited by a production company and worked my way up in the production ranks while John went to grad school at NYU on the screenwriting track and that ended up being the balance of how we work together. I'd produce, he'd write, and then we'd co-direct projects together. So we don't have conflicting voices with the cast, John would be the acting confidante and I'd talk with the cinematographers between takes. We did two shorts together like that and it worked really well, but that was a while ago and we were jonesing to get behind the camera together again. So we took a leap of faith with this feature.

How different is the your film from Future Folk's original back story?

Mitchell: This'll be interesting. What do you remember of the original story? That's the bigger question.

Klaitz: That's actually a very difficult question to answer. We've been doing Future Folk for many years now--7, I think?--so we've been doing this for a long time. I think the main difference was he [General Trius] and I were here to save Earth and our home planet Hondo in our original inception of the band. So that was changed in the film--we were initially assassins.

Walker: Your original story was that your home planet had died--it was destroyed by Earth--so you travelled back in time.

Mitchell: So you came back in time to spread the international language of music.

Walker: It was a mission of peace.

Klaitz: Is that really what it was?

Walker: Yeah. The idea was that if they could play their music and come back in time to change Earth--

Walker: That's the Future Folk part. The fun thing about seeing these guys on stage is that it's a true folk duo. There's a lot of banter, great chemistry, they're spinning these stories and it dovetails into music and it's a really great evening. The hardest thing is--this film is really an adaptation, a companion piece to their music. And there are certain rules you need to follow when writing a screenplay. John did a great job figuring out what should stay and what should go from their story because they're two different mediums but the chemistry is still the same.

How much has Future Folk's live performance changed over the years?

Klaitz: It hasn't changed that much. We've changed the story a little to go along with the movie, cuz why the hell not? But it's really about me and Nils. I feel like I'm doing what I'm meant to be doing when I'm performing with that kid.

Walker: He's unbelievably funny without even trying. He sends hilarious emails all the time and it's just depressing--if someone is that smart and that funny and witty all the time without trying, we're screwed!

Mitchell: The amazing thing about him is that he by no means considers himself a professional actor. He's never even done a high school play before. He has no background. But he just has that quality about him, like Jeremy said. It's like a Conan O'Brien kind of thing where everything out of his mouth is so fast and clever. So we knew that if we could get that charm and get that wit on screen that it would make the movie.

Walker: So a lot of the directing was putting him in situations where he could feel comfortable. He went from zero to a hundred really quickly on this project. The first couple takes were pretty rough but then he was on--he got it, it was just like being in front of the microphone, and from then on it was a breeze.

The costumes in the film look professionally made--what did Future Folk wear before you made the movie?

Walker: They wore sweat suits and buckets--you know the fans in the film? The original costumes were more like that. That was great, but--the hardest thing for us is really approached it like an adaptation and wanted to get the right tone. If we had the guys come on stage in the film in sweatpants and buckets on their heads then it would just look like we weren't trying very hard. At the same time, if they came in wearing super high-end space suits--one, we couldn't afford it, and two, it would tip the balance too far in the other direction. We wanted that playful, lo-fi feel. So we transposed that wardrobe to the fans and gave it an upgrade.

But there's this wonderful thing that they do in their act. Hondonians aren't that dissimilar from Earthlings. You'll learn from their music and their song "Chromosome Z" that that's the biggest difference--they've got chromosome Z.

Klaitz: And they've got many livers, which allows them to drink a lot and often.

One of the funniest parts was when the Mighty Kevin thought General Trius was going to kill him when Trius put the picks on his fingers and slowly lifted up his banjo. Which instrument do you think would best double as a murder weapon?

Walker: I love that shot of the finger picks that he uses to play the banjo. They look like claws. Something percussive probably. Maybe a mallet?

Klaitz: There was a harp down there that looked pretty scary if you stick your arms through it.

Mitchell: The cymbals are a little terrifying.

Walker: Cymbals can be projectiles.

THE HISTORY OF FUTURE FOLK's screened at the Los Angeles Film Festival.