Blu-ray Review: GHOST RIDER: SPIRIT OF VENGEANCE Is My Kind of Bad 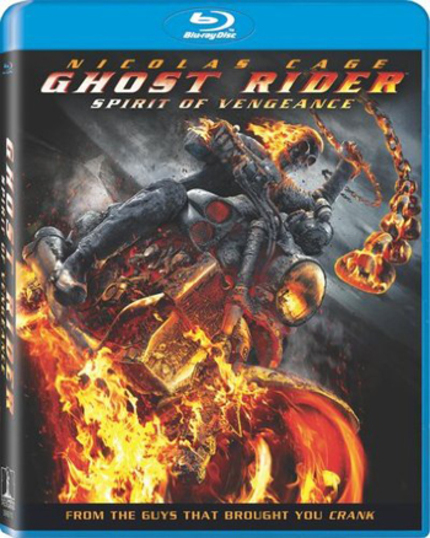 Let's start by allowing me to clarify that Ghost Rider: Spirit of Vengeance is not a good movie. That having been said, this sequel from the Crank writing and directing team of Neveldine and Taylor is wildly enjoyable because it so deliberately and so often hits the wrong notes in terms of tone and execution.

This not-quite-a-superhero-movie reconfigures its lead, cursed motorcycle stunt man Johnny Blaze as a twitching junkie, his curse, a hunger to drag evil souls down to hell. So of course this kind of twitchy, wild-eyed, sweaty, hootin' and hollerin' performance was a perfect fit for Nicholas Cage, who embraces the role as though this is the last act of his performance in Herzog's Bad Lieutenant remake/homage. The flame headed rider, too, is now a jittery screamer, his movements cut and edited so that he moves between frames towards his quarry, like a fiery Samara.

This last bit is actually one of the more inventive elements of the whole movie would could have used more like it. As is stands, the plot is pretty pedestrian (you know, for a story involving a whacked-out stunt motorcyclist who bargained his soul to the devil having to protect a young boy from the forces of hell).

The devil in this case is Roarke (Ciarán Hinds, far better than the material warrants), who needs to move his own spirit into that of a 13-year-old boy on the night of the winter solstice. Unfortunately, he can't seem to keep staffed up with effective minions, led by the useless arms dealer Carrigan (Johnny Whitworth), so the kid keeps getting away with the help of his mom, Nadya (Violante Placido).

The basic outline of the movie (from a story by David Goyer) isn't all that compelling: troubled hero is dragged in to help a kid, troubled hero learns to be a better man, blah blah. But the Neveldine/Taylor innovation is to make every one and everything in Spirit of Vengeance feel slightly strung out, stretched, and otherwise chemically enhanced. How else to explain the slow drawl of Hinds' performance, or the camera that won't stop moving (but thankfully still follows the action in a clear way)?

As for the movie's action, there aren't too many inventive setpieces along the lines of the Crank films, although the Rider's ability to give hellfire to anything he's riding is a nice touch in a couple of scenes, and the construction site fight has some odd but oddly compelling flourishes. For instance, who knows why the Rider hovers above the ground, prone, for a good 20 seconds, spinning like a top? No idea? I don't think Neveldine or Taylor know either, but it's such a strange, almost unsettling moment for its oddity that it's kind of worth it.

A lot of this very watchable movie doesn't work: Idris Elba is wasted, stuck with a terrible French accent and colored contacts. Likewise underused is Christopher Lambert in what amounts to an extended cameo with a predictable conclusion. And if I'm being honest, Cage's performance crosses the line from inspired madness to just utter ridiculous more often than not, but it's hard not to watch him.

If you have any kind of affinity for the lackluster first movie, this might not be for you (or for anyone with any particular loyalty to the source material from Marvel's on-and-off line of Ghost Rider solo series and minis).

Still, Neveldine and Taylor give the material a messy, sloppy, vicious kind of energy, and with a more focused vision (and a better script, perhaps) it'd be easier to be less ambivalent towards the final product.

The Blu-ray includes commentary with directors Neveldine and Taylor, deleted scenes, and the "Path to Vengeance" six-part featurette about the making of the movie.

Ghost Rider: Spirit of Vengeance is available now on DVD, Blu-ray, and VOD.