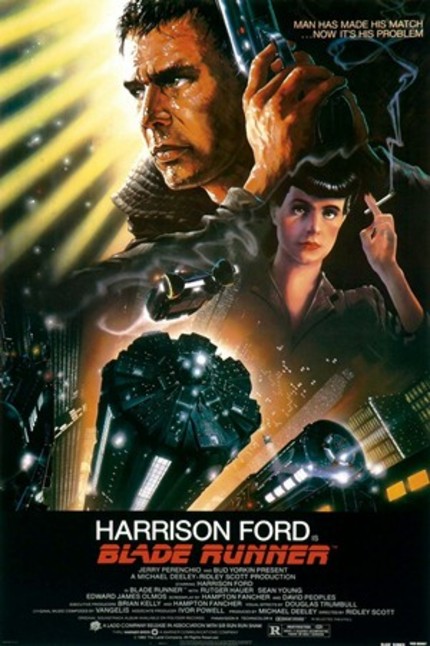 Well, now, it would appear that Blade Runner producer Andrew Kosove's word is worth a whole lot of nothing. Back in February ScreenAnarchy caught word that the producers of the upcoming return to the world of Blade Runner had reached out to original star Harrison Ford, having preliminary conversations to gauge his interest in returning. The story caused quite a stir and very soon Kosove was on the scene decrying it as absolutely false, that this was something they were not even considering because the new Blade Runner was going to be a 'complete reinvention'.

There was pressure on ScreenAnarchy to retract the story at the time, which we refused to do because we knew with absolute certainty that our sources were solid.

Well, skip forward a few months and tucked away in the press release announcing the return of original writer Kosove acknowledged that the new Blade Runner was not a reinvention at all but a chronological sequel, set at some later date in the same story / world. And now this:

Director Ridley Scott has been asked about Ford's potential involvement and, in his words: "I don't think it'll be Harrison starring but I've got to have him in it somewhere. That'd be amusing..."

So, there it is straight from the horse's mouth. This isn't going to be a story directly about Deckard but if they can get Ford to say yes they want him in there somewhere / somehow ...

Today we received the following letter from producer Andrew Kosove, reprinted here in its entirety:

As the many people who know me (of which you are not one), both inside and outside the entertainment industry, will happily tell you, my "word"--despite your affront--is unwaveringly reliable. Therefore, let me repeat to you now what I stated when you first posted your inaccurate article many weeks ago: At no time has Alcon Entertainment been in touch with Harrison Ford or his representatives to discuss the possibility that he reprise his character of RICK DECKARD in a sequel or prequel to BLADE RUNNER. As I said at the time, and I quote, "it is possible (Mr. Ford) could return to BLADE RUNNER....but it was premature to even consider at this juncture of the process." My statement was 100% accurate and I stand by it. Your alleged "sources" were feeding you fabrications.

Let me now accurately update you and your readers about where we are with BLADE RUNNER.

As was announced recently, we brought onto the project Hampton Fancher to collaborate with Ridley Scott on the treatment/script idea for the sequel. Fancher, of course, wrote the original BLADE RUNNER. Then, in a recent article during his promotion of PROMETHEUS, Ridley made a brief reference to the possibility that the DECKARD character might figure into the story. However, this is a BRAND NEW development and is VERY preliminary. Indeed, you can refer to the article in this week's USA TODAY in which Ridley again mentions BLADE RUNNER, clarifying, "it may be a sequel. Or a sequel. I don't know yet."

So now you and your readers have all the accurate information. I don't know where you come from, but where I am from, questioning a man's word is serious business. So my suggestion to you in the future is that if you think you are getting false information from me or anyone else at Alcon, you can contact me, and I would welcome the opportunity to talk with you.

It would be quite fantastic if they would also bring back Deckard's Partner (replicant handler?) Gaff. Edward James Olmos has been quoted as saying that Blade Runner is a direct sequel to the modern Battlestar Galactica series he starred in, so I imagine(hope) he would be interested.