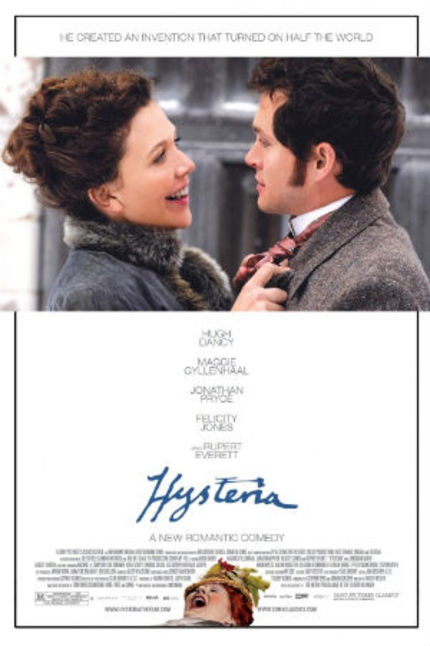 We start in London in the late 1800s, where we find our young whippersnapper doctor dismissed for his radical theories of "Germs", and how these invisible creatures can affect health. After his handwashing crusade is dismissed (as, in turn, is he), our good Doctor finds himself under the guidance of another radical practitioner.

Doctor Dalrymple (played perfectly as always by Jonathan Pryce) is a specialist is "women's medicine". Essentially, he has found that he can cheer up his "hysterical" woman by digitally palpating their clitoris to release their pent up frustrations. Naturally, there's no pleasure or sexual connection here, this is merely a formal medical procedure, one carried out with firm Victorian panache.

Naturally, a growing list of clientele begin to sign up for this procedure, and after finding their arms and wrists quickly worn out through repetitive stress, the doctors decide to take a new invention, the electric motor, and have a go at automating the treatment.

Facile? Maybe. But the film tells this (true) story with such charm and aplomb that it's hard not to fall for the work. Even a arch subplot about starving orphans avoids what I felt certain to be a descent into maudlin storytelling. There's a dexterity with the work, finding a line between being both rique and charming whilst telling what, really, is a story too weird to be true, and made all the more revealing for its verisimilitude.

The film has end credits well worth sitting through for, as we see vibrators throughout the ages appear on screen in a kind of anthropological slide show. At the press screening I attended, the (primarily female) audience clapping for the Rabbit, a contemporary model, made for a particularly amusing real life coda to the piece.

It's a film unlikely to break any box office records, but it's a charming little thing that's just super fun to watch. While there's an earnestness that runs throughout, a kind of Dickensian moralizing mixed with a superficially feminist ideology, at it's heart this is a light entertainment spiced up with a peppering of middle-aged women being brought to climax with the aid of bold men of science.

(The initial version of this review appeared on Filmfest.ca as part of TIFF 2011 coverage.).


Hysteria opens in New York and Los Angeles on Friday, May 18, before expanding across the U.S. and Canada in the coming weeks. Check the official site for more information.