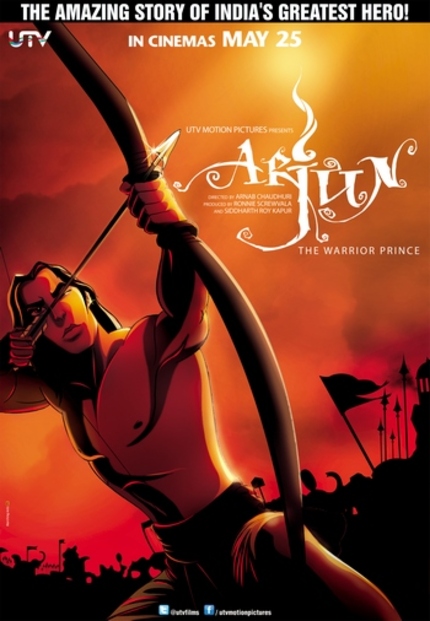 This Friday, May 25th, Disney and UTV are taking another stab at the Indian film market with the 2D CG animated epic, Arjun: The Warrior Prince. The film has been in the works for several years, and I recall seeing promo trailers as much as three years before this release. However, this time the film is actually going out into the world for real.

Regular readers will know that this is not the first Disney production on Indian shores. This is, in fact, the second animated feature, and fifth major feature co-produced by the house of mouse over the last five years. The last animated feature we saw was the charming, though rudimentary, Roadside Romeo, which tanked at the box office in spite of the voice talents of Saif Ali Khan and Kareena Kapoor.

Unfortunately, apart from the critical success of Do Dooni Chaar, Disney's other forays into the Indian market have all fallen flat as well. Child superhero film, Zokkomon, disappeared quickly from theaters, in spite of its Spy Kids-esque charm, and the Telugu fantasy extravaganza Once Upon A Warrior (Anaganaga O Dheerudu) was a critical and commercial flop that suffered from a serious lack of focus and some poor support for the solid acting of Siddarth in the lead role. Reviews for both can be found in the archive and via links below.

I have pretty high hopes for Arjun, though. The trailer looks quite slick, and I can't see a whole lot of a gap between this and Disney's American cel animated films in terms of quality. I don't know the story, but the film looks pretty breathtaking, and will mark the first time that a quality animated feature from India has debuted simultaneously at home and abroad. Our own Peter Gutierrez caught the film at a preview screening today and will have a review up by the weekend.

The main obstacle I see standing in the way of Arjun's success is the fact that India lacks a domestic market for children's films. The vast majority of successful children's cinema in India is imported, and even then, most children simply go see whatever their parents are seeing. Attempts have been made to jump start this latent market, but to little financial gain. There are really no great success stories involving children's' films in India, which is a shame, but there hasn't been much of a desire, so who can blame them. Nevertheless, Disney seems determined to create the market, and with UTV on their side, they certainly have a decent shot this time around, at least at making some headway.

More about Arjun: The Warrior Prince