5-25-77: STAR WARS Memories, and the Man Who Predicted Its Success 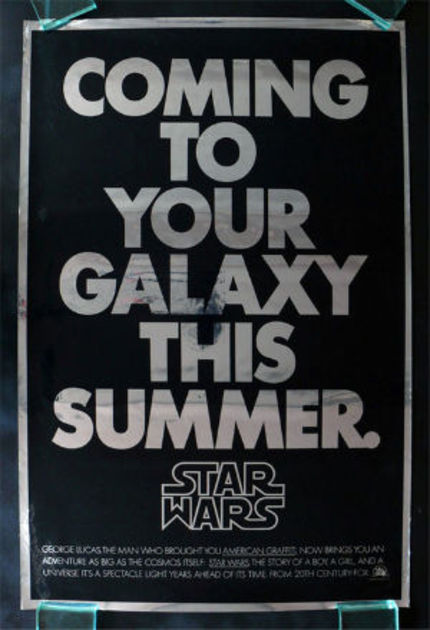 Thirty-five years ago today, Star Wars was released in theatres in the U.S., instantly striking a very popular chord as crowds lined up and waited for hours to see George Lucas' old-fashioned new-fangled space opera.

I remember it well. A friend cut class on opening day to see it first, and reported back with disgust on the unresolved ending: 'If they don't make a sequel, it'll be worthless,' or words to that effect. Another friend and I waited in line for more than three hours in the parking lot of the old Avco Center Cinema in Westwood, California, on a sunny Saturday afternoon, and were overjoyed when we barely squeezed in. (Otherwise, we'd have to wait another two hours or more.) But we were young, and when the opening shot had concluded, we turned to each other with our mouths agape, and sat enthralled throughout.

Here's a fun footnote that I stumbled upon while going through my magazine collection after a recent move: A year before Star Wars opened, one man predicted that it would be the science fiction film of the decade.

In the July 1976 issue of The Magazine of Fantasy and Science Fiction, film columnist Baird Searles wrote:

I got a preview of a film this month that will probably only be going into production just before this sees print.

Bear in mind that magazine print schedule requirements would mean Searles turned in his column several months before July. He continues:

What do I mean by a preview, then? The gist of the script accompanied by a series of conceptual paintings which included sets, costumes, characters, and hardware; if it only half lives up to the promise shown, it will be the s/f film of the 1970s.

Searles then expresses his conviction about the filmmaker, a belief many science fiction fans probably held at that time:

What really gives me the confidence to come on this strong this far in advance is that it is written and produced by George Lucas, who is best known for American Graffiti, but who made an indelible impression on me with THX-1138, a film short on concepts but very, very long on style.

George, we had such faith in you then!

Lucas, like most great filmmakers, is not about to repeat himself; Star Wars -- the upcoming film -- is very, very long on concept. He obviously knows his science fiction; the script kept reminding me (in the best sense) of Heinlein, Herbert, Bradley, and above all, E.E. Smith given a contemporary sensibility. There is a totalitarian Galactic Empire; there are rebel planets, aliens, robots, battles in space, a superpowerful elite, laser swords, wizards, and just about everything you always wanted to see on screen but knew nobody would put there.

Perhaps the best clue to its science fictional sophistication is the fact that the film has nothing to do with Earth. Even in Forbidden Planet, the best example of this kind of thing to hit the screen so far, the ship comes from Earth; Star Wars is well beyond that.

Ballentine will release the novelization in the fall. Then all we do is keep our fingers crossed that it will be released on screen.

Ah, we were so young then.

Searles reviewed films for F&SF from 1970 to 1984 and wrote a book review column for Isaac Asimov's Science Fiction Magazine from 1979 to 1993, when he passed away.

What are your memories of first seeing Star Wars?

Do you feel this content is inappropriate or infringes upon your rights? Click here to report it, or see our DMCA policy.
Harrison FordAlec GuinnessMark HamillJames Earl JonesActionAdventureSci-Fi