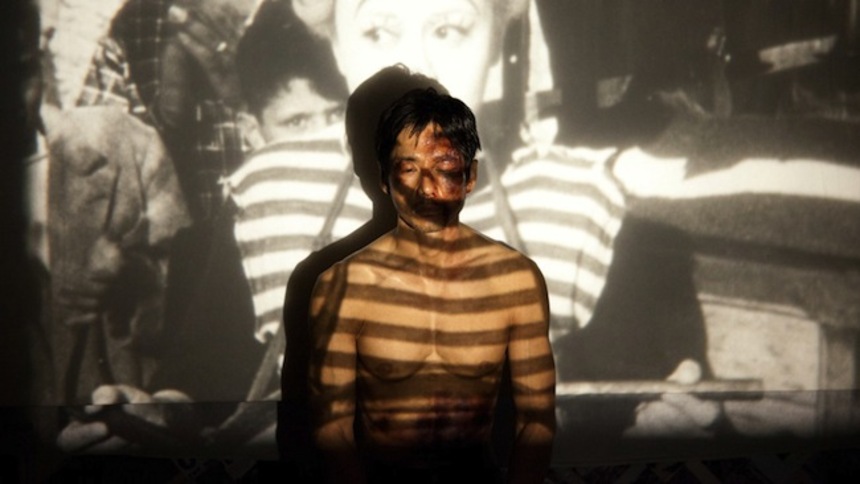 To my fellow cinephiles: In times of trouble, in moments of great doubt, when it seems like the world won't listen, or we can't hear, but whatever way it is, it all seems like it'll come crashing down, have we not all wished to weep at the foot of Akira Kurosawa's grave, asking the great director for advice?

What sounds like a climactic moment for filmmaker-in-crises Shinji (Hidetoshi Nishijima) actually happens within the first 20 minutes of Iranian filmmaker Amir Naderi's latest. The moment occurs shortly after Shinji has been told his brother has been killed by the yakuza for selling off territory to the Chinese -- a risky move for a lowly debt collector with an unpaid loan. Shinji has now inherited that loan, which had actually been taken out on his behalf so he could finance his films. He now has 14 days to pay back the yakuza 12 million yen (which really is a lot in yen).

Collapsing in front of the great master's extravagant headstone, Shinji extolls his greatest desire, for what must be the umpteenth time: "to make great films like you -- to make pure cinema!" The moment feels so overly earnest and melodramatic, done up in black and white, showing us how naive and narrow-minded Shinji just may be, as to be absurd and yet... I got teary-eyed. For at the very least I too earnestly love Akira Kurosawa and his films.

For this is the strange nature of an allegory, which Cut clearly is. And so with this, Naderi, arguably a master filmmaker in his own right, may both elevate and frustrate his audience. For depending on your own background and relationship to cinema, Cut may seem far too forceful and annoying in its use of pure, undisguised metaphor. Frustrating in that a movie which has its hero pleading on the streets with a megaphone on the need for "pure cinema, not this multiplex entertainment", not only sounds increasingly one-note and narrow-minded, but the fact that this is shot on video, with very knowing and precise stage lighting and set design, as if to feel that half the time we're watching theater and not cinema. Again, that's the interesting nature of allegory.

Take for instance when Shinji enters the boxing club where his brother's partners work with the neighborhood boss: the falsity of the place, is amusing. The old man who sits at the bar, looking like he's stepped out of a film from the 50s; the tomboy-ish barkeep, and the ring and equipment which are really never used, but stand there in place as the seed which plants an idea in Shinji's head. And then the yakuza emerge, one by one, from the "backstage", with their swagger, and their glares, cocking their heads to one side -- this is not the posturing of yakuza, but so clearly the posturing of actors playing yakuza; the yakuza we've seen in countless films for decades.

The obvious falseness of the boxing club is to create the greatest contrast in Shinji's journey, how he ultimately decides to pay off the debt which is: He will come to the boxing club everyday and have yakuza punch him for money -- as many times as they can, raising the price with each punch. Returning to his home each night, face swollen, torso speckled with welts and bruises, he turns on his projector and bathes in the light of cinema; healing his form, purifying his body. Each film that Shinji chooses, that Naderi uses, is so pertinent to the moment, to the euphoria of this truth, that these sequences alone are worth watching Cut for. Though the nature of these films and why they are so important to Shinji may be lost if you haven't seen these choices yourself. And that's just it, Naderi's film is more likely to be enjoyed and understood by the uber film geek -- in a sense his message may get lost because he is preaching to the choir. That is to say a less enthused or educated viewer may scoff at the pacing and the metaphors. They may find the film unsuccessful at making its case for "pure cinema" because it is not of equal measure with the classics in its own execution. And the film's actual climax is so cinema-indulgent that it may perhaps only be tolerated by a cinephile that can knowingly take it in with a sense of humor and a great sense of empathy... and a lot in between.

So my caveat is this: I've only seen Cut once. And once is clearly not enough. Yet shouldn't it be for Naderi to share with us this wonderful "nothingness" of cinema? Well, maybe. With that, I retire my words for the moment, let them steep, and hopefully I can talk with my colleagues a little bit more about Cut in our wrap-up next week. For if anything this is one of those films that should fervently be talked about (and not reviewed) amongst friends, enemies, strangers... really, whomever might want to listen.

Cut screens tonight at 6:30pm, and tomorrow, the 27th at 10pm. For more info and to purchase tickets click here.