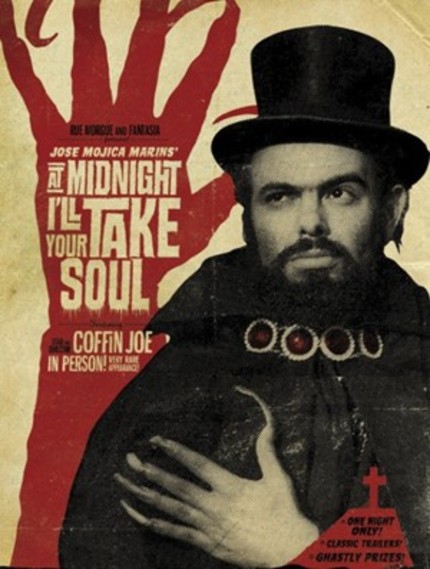 Harbinger International is pleased to announce that we have entered into agreements with Grammy Award winner Chris Vrenna to score the seqment "Viral" , and that we have added two new directors to out already impressive lineup. Jose Mojica Marins (aka Coffin Joe), the legendary Brazilian king of blasphemy and terror, is set to direct the segment "Viral" for Profane Exhibit. Academy Award nominee and film festival favorite Ignacio "Nacho" Vigalondo has also joined the lineup for "the sins of the father".

Vrenna has worked as a musician, producer, and/or engineer and remixer for such bands as Rob Zombie, Megadeth, Metallica, Lords of Acid, David Bowie, Slipknot, Green Day, Pigface, KMFDM and more (including, briefly, Guns 'N' Roses). However, he is best known for his work in Nine Inch Nails and Marilyn Manson. He produced and played drums on the most recent Marilyn Monroe record. Since 2004 he has been drummer and keyboardist with Marilyn Manson. In 1995, as a member of Nine Inch Nails, he received an Emmy for Best Metal Performance for the NIN performance at Woodstock 1994.

He has also scored many popular video games, such as Doom 3, and recently left Marilyn Manson to focus on scoring films like Profane Exhibit.

Steven Severin, is an English musician, composer, bassist and co-founding member of Siouxsie and the Banshees.[2]
He took the name "Severin", from the Leopold von Sacher-Masoch character that is the subject of the Velvet Underground song "Venus in Furs".
After the split of Siouxsie and the Banshees in 1996, Severin began a solo career and created his own label RE. Henceforth, he also performs live in solo.

In 1963, Jose Mojica Marins formed the legendary character Coffin Joe (Zé do Caixão) for the now legendary cult classic At Midnight I'll Take Your Soul that he directed as well as starred in. The film's blasphemous nature led to a storm of controversy and criticism in his home country of Brazil. This film, the first in the 'Coffin Joe Trilogy' is considered Brazil's first horror film. Coffin Joe was soon appearing in many films, tv shows, videos, and more. He was known for his outrageously morbid personal appearance- long, curled fingernails and a midnight black top hat. The bands White Zombie and Necrophagia both sample Coffin Joe films, and the Brazilian band Sepultura sings a song that refers to him on their Roots album. He performed an infamous live 'blessing' of Sepultura during one of their performances. Due to half a century working in the horror genre, Coffin Joe is considered a living legend and a walking symbol of sacrilege, perversion, evil, and violence, and his evil sinister persona has made him into cult icon with an international following. Because Coffin Joe's films were so sacrilegious, he is a living profane exhibit and we are extremely happy that he will be adding his skills to Profane Exhibit.

Ignacio "Nacho" Vigalondo has also joined the lineup for "the sins of the father".The Spanish director is best known for his film Time Crimes and his most recent film, and the upcoming Extraterrestrial. A list of his many awards can be found at http://www.imdb.com/name/nm1443023/awards.

The Profane Exhibit is an extreme international horror anthology film that was conceived, written, and produced by David Bond and Manda Manuel. Legendary horror writer Ray Garton wrote the wraparound segment, and Scott Swan (Showtime's Masters of Horror) wrote the screenplay. Jeremy Kasten, director of such films as the recent Wizard of Gore remake, serves as the film's editor.

There are no boundaries.