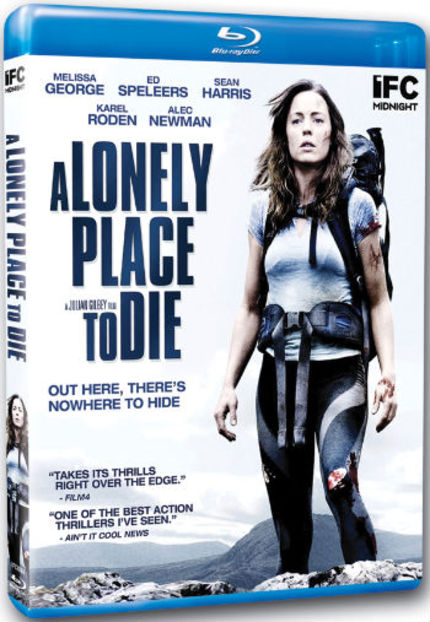 [Congratulations to our winners: Rebecca Flagg, Devin Sabas, Cheryl Schurmeier, Melissa Sawvell, and Jon Van Dyke. Thanks to everyone who entered!]

If I know you, you're sitting at home thinking, "I wish I had a copy of Julian Gilbey's thriller A Lonely Place to Die on Blu-ray, so I could enjoy the excitement of mountain climbing, the very real possibility of falling and splattering on the rocks below, and the beauty of Melissa George, all in splendid high definition!"

Well, if you're a U.S. resident, we have good news for you. To celebrate its release on home video today, we have five copies of A Lonely Place to Die to give away on Blu-ray, courtesy of the good folks at IFC Midnight and MPI Home Video. I saw the film on the big screen at Fantastic Fest last year, and, though I had some reservations about the film as a whole, it's definitely worth a watch or two, and looks great -- especially the mountain-climbing scenes -- so the Blu-ray edition should tickle your fancy at home.

To enter, all you need to do -- if you're a U.S. resident (apologies to everyone else) -- is send your contest entry to the e-mail address below and you are entered! This contest will run for one week, ending on March 27. [Note: The contest is now closed..]

The official synopsis is below.


A group of climbers make a grim discovery high up in the mountains: buried amongst the peaks is an eight-year-old girl, terrified, dehydrated and unable to speak a word of English. Alison (Melissa George, TV's Grey's Anatomy, 30 Days of Night), the group leader, convinces her group to rescue her. But as they attempt to take the girl to safety, they become involved in an elaborate kidnapping plot and soon must fight for their lives as they're pursued by both the girl's kidnappers and a group of hired mercenaries sent to return the girl to her war-criminal father. With danger all around them and mountainous terrain to navigate, Alison and her party are in for a grueling ordeal in order to save both the girl and themselves.