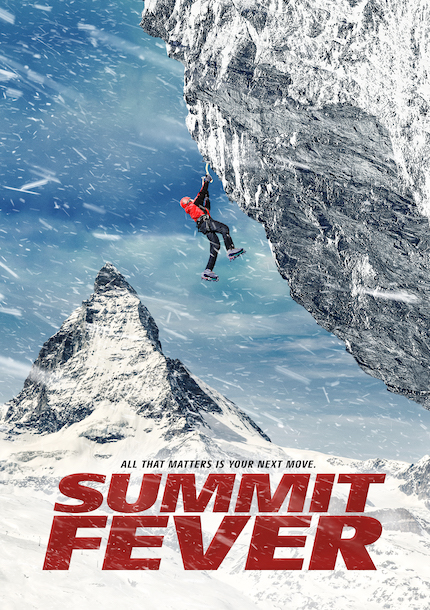 Are you afraid of heights? Then perhaps watching the new Summit Fever trailer is not a good idea.

Speaking on behalf of everyone else, however, I found it quite thrilling. Julian Gilbey, who wrote and directed the film, previously made the mostly terrific A Lonely Place to Die, which I saw at Fantastic Fest about ten years ago, I believe in the company of my colleague James Marsh, who wrote in his review: "An ambitious mountain-based action thriller that consistently delivers top drawer thrills for at least two thirds of its running time."

"Ryan Phillippe and Freddie Thorp star in the adrenaline-fueled thrill-ride where an ambitious mountain expedition becomes a breathtaking struggle for survival." (I certainly hope so.)

"A daring dream to scale the world's most challenging trio of mountains soon turns into a terrifying nightmare for a group of friends when a deadly storm traps the climbers near the summit and cuts off all hope of rescue." (I hate it when that happens. Don't you?)

"With the odds stacked against them, the friends are forced to trust each other to save themselves by any means necessary." (Yes! Exactly what I want to see.)

Summit Fever is scheduled to be released in theaters, on Digital, and On Demand October 14, 2022, via Saban Films and Paramount Pictures. Check out the trailer below, then check your pulse.

Do you feel this content is inappropriate or infringes upon your rights? Click here to report it, or see our DMCA policy.
Freddie ThorpHannah NewJulian GilbeyMathilde WarnierMichel BielRyan PhillippeThéo Christine