We Have Your First Look At The EEGA Trailer From SS Rajamouli Right Here! 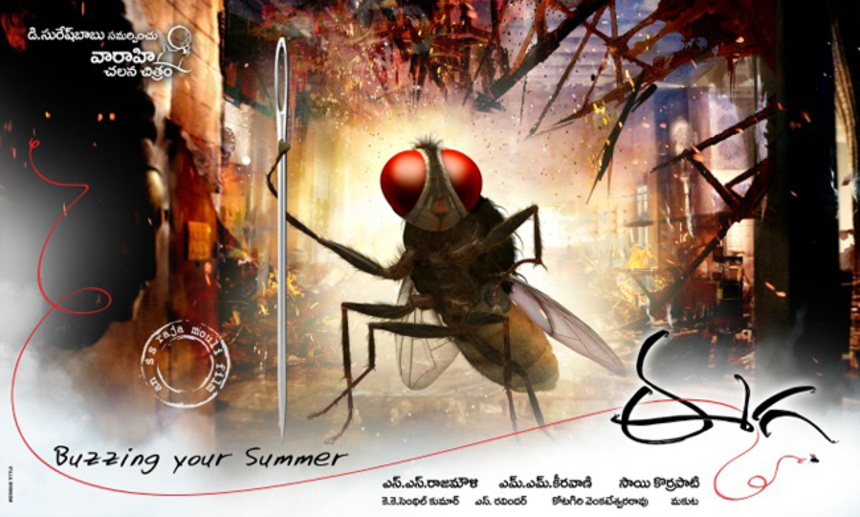 It's going to be a big summer for Tollywood box office king, S.S. Rajamouli! First up will be the incredible looking Bollywood remake of his Telugu film Vikramarkudu, Rowdy Rathore. Then, later in the summer, his latest big budget venture Eega will be hitting screens. For several months we've all just known that it was to involve a CGI fly as a main character, but were left to speculate on the nature of the film. This first trailer gives a pretty awesome look at the film's tone and basic plot, and I love it so far.

Rajamouli is one of very few directors in Tollywood with a consistent record of high quality output. All of his films have been great successes, and many of the more recent ones have pushed the boundaries of Indian film technology to new heights, and Eega seems to continue this trend. I've seen two of Rajamouli's previous films, the wonderful all time Telugu box office champ Magadheera, and the socio-fantasy film Yamadonga, which is perhaps a bit less accessible to the world outside India, but very entertaining nonetheless. The CG FX on display in this first trailer for Eega are pretty damned impressive, and if they don't fall apart on the big screen, this looks like a very exciting film.

Nani plays a man very much in love with a woman, played by southie starlet Samantha. He dotes on her and enjoys her presence more than anything. When an crook, played by Sudeep, gets the hots for Samantha as well, he has no qualms about eliminating his competition. Nani is reincarnated as a fly and is determined to save his beloved Samantha from Sudeep in any way he can. One may not think a fly can do much damage, but this trailer shows us what a little bit of creativity can do.  The look here is solid, and I can't wait to see the film!

Please, give Eega 2:30 of your day, and don't forget to wait through to the very last shot, you won't regret it!

Check out more behind the scenes images and video at the Eega homepage!