Review: THIS MUST BE THE PLACE 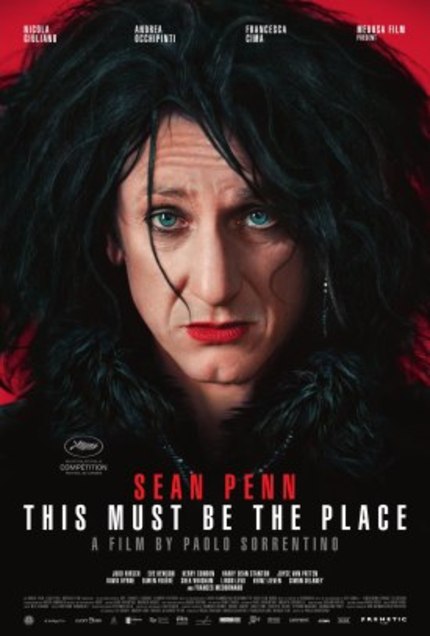 For some people This Must Be The Place is going to be the new Sean Penn flick, for others it will be the new Paolo Sorrentino film. The difference may seem futile, but based on this simple distinction you might say that roughly one group is going to appreciate the film for what it is, while the other group will end up being bored to death. I'm in the believers group and thoroughly enjoyed Sorrentino's latest effort, but it's definitely not a film for everyone.

Ever since I discovered Sorrentino's Le Conseguenze dell'Amore I've been following the man with heightened enthusiasm. Il Divo was a small disappointment, but with This Must Be The Place Sorrentino proves that Le Conseguenze dell'Amore was more than just a lucky hit. For people worrying about Sorrentino moving to an American setting, they can rest assured. Sorrentino's move to American soil feels more connected to Wong Kar Wai's My Blueberry Nights than it does to Nicholas Refn's Drive.

Even though Penn claims his character is not based on Ozzy Osbourne, it's hard to dismiss the idea that they have an awful lot in common. Cheyenne (as his character is named) could very well be the undiscovered offspring of Ozzy Osbourne and Tim Burton (that is, if nature had permitted them to mate). Cheyenne is the personification of lost rock glory, represented by a character that has mush for brains and has the mental reaction speed of a retired snail. While not entirely unhappy, Cheyenne seems lost in a world that is clearly not his own.

When his father dies he travels back to America, where he learns that his dad spent the last 20 years of his life hunting a nazi officer that made a fool of him during the war. Talk about dedication to revenge. Cheyenne decides to finish his dad's quest, even though the two of them had failed to talk to each other ever since Cheyenne moved to Ireland. It's quite an absurd story, but within the film it never comes off as too far-fetched or overly weird.

If Le Conseguenze dell'Amore and Il Divo made one thing clear, it's that Sorrentino pays close attention to the visual side of things. This Must Be The Place is no different. Strong, inventive camera angles, controlled camera swoops and strong of color and light dominate the film. Every scene holds some or several visual details that set it apart from other films. It's a tad glossy at certain points, but overall a very pleasant film to look at.

While I wasn't terribly impressed with the choice of music for the This Must Be The Place, Sorrentino still manages to use it to great effect. I'm not a rock fan (in any form), so I didn't expect to be moved by the soundtrack, but many of the songs are used in such a way that they at least add some form of individuality to the scenes. I did however like the multiple use of Arvo Pärt's Spiegel Im Spiegel (from Gerry fame). While not a very original choice, Sorrentino handles it with exceptional class.

Even though I clearly put a lot of focus on Sorrentino's share in the film's success, Penn's performance isn't to be dismissed that easily. While he has a pretty one-dimensional character that thrives on mannerisms, he transform in Cheyenne with great conviction and really makes the character his own. A remarkable and memorable role and probably the best performance of Penn I have witnessed so far. The supporting cast is great too, with Francis McDormand and Harry Dean Stanton coming out as most memorable secondary characters. McDormand in particular shines as Cheyenne's wife early on in the film.

This Must Be The Place has many unique elements that set it apart from other films, still a sense of familiarity fell over me as the film progressed. After a lengthy introduction the film turns into a rather straight-forward road movie, where Cheyenne meets up with a series of weird, freaky and/or unique individuals. It's not unlike Jarmusch's Broken Flowers, even the bittersweet undercurrent with strong dark comedy touches refers back to Jarmusch's film. It's definitely not a one on one copy and it could just as well be a very personal link, but I believe both films could make for an interesting back to back program.

This Must Be The Place is a lovely mix of comedy, absurdity and human drama, featuring a strong lead and a memorable cast of secondary characters. The film is a tad long and might move along rather slowly if you're not used to Sorrentino's style of filming, but people who can appreciate a good arthouse flick should feel right at home. The film is genuinely funny, moving and refreshingly honest. A film that restored my faith in Sorrentino and one that makes me look forward to his next project.

More about This Must Be the Place