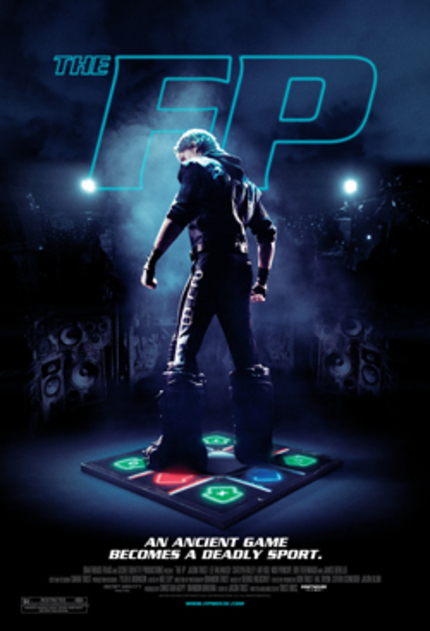 With the Trost Brothers' cult hit The FP opening in theaters tomorrow we now revisit our earlier review from the SXSW 2011 premiere.

A common complaint directed at scrappy little indie comedies is that while they frequently have a clever or amusing "hook," they often lack the creativity required to stretch that hook into a feature-length film. And while the debut flick from Jason and Brandon Trost is based on a short film from a few years ago, it still offers just enough wit, weirdness, and colorful insanity to fill a 78-minute frame. Aside from a small handful of moments that are a bit dry or redundant, The FP is a surprisingly, consistently, and profanely funny little indie experiment.

Act I sets the stage for the insanity to follow, and it's probably the most reliably funny section of the movie as well: basically, we're knee deep in "sports movie spoof" territory with The FP, although the old-school movie buffs will notice tons of silly little moments of nerdly wit. Imagine someone threw all the Rocky sequels into a blender, poured in a huge bucket of bizarrely amusing slang nonsense, and set the machine on "silly." How silly? Well, let's just say that the competition scenes are not centered on football, golf, or even checkers. Nope, the furious nemeses in The FP do battle through ... Beat Beat Revolution. No knives or guns, just two aggravated goofballs who go toe-to-toe on those dancey video game set-ups you often see in arcades or within the basements of wealthy friends.

So while The FP is basically one central joke, it benefits from the same thing that made Black Dynamite so much fun: once the "one joke" is utilized, the ensemble cast does all it can to keep the plates spinning onscreen. Particular standouts include Art Hsu, who throws so much exuberant goofiness into his arcane slang-talk that it's tough not to chuckle, and Lee Valmassey, playing a villainous Mr. T-inspired lunatic who screams his every syllable like he's a dog eating a steak. No-nonsense movie freaks will recognize Sean Whalen, Clifton Collins Jr., Dash Mihok, and James DeBello in small but enjoyably weird roles, while Jason Trost (as our hero JTRO) does a fine job of balancing broad silliness with exasperated lunacy.

Pitched as it is at a consistently high volume, and awash as it is in some rather specific pop-culture minutiae, The FP may not be for all tastes, but as a guy who grew up on video games, sports movies, and silly-ass slang in equal measure, I found quite a lot to enjoy in The FP.
Tweet Post Submit

Find listings and order tickets here
THE FP opens March 16 in select cities and is available to create your own screening nationwide through Tugg.com