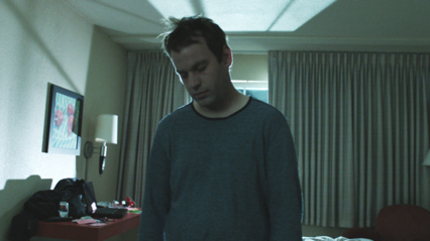 After it's amazing reception at Sundance this year, including winning the Best of NEXT audience award, Sleepwalk With Me is continuing with that momentum at SXSW. Mike Birbiglia, sat down with us to discuss his debut feature, sleepwalking and being a funny guy turned filmmaker.

ScreenAnarchy: Congratulations on the big Sundance win! Have things changed in your life now that you're film is off to such a great start? How do you hope to use this momentum?

Mike: Everything has changed! I received a Sundance helicopter which now transports me around the world. It's also been great to receive the NEXT categories' meal plan where they deliver a gourmet meal to my doorstep every morning so that I stay in top form. No, I'm kidding. But it's been very exciting. It was a wildly gratifying experience - a big honor. And the film is headed to South by Southwest Film Festival and I'm on tour with my new show, My Girlfriend's Boyfriend. But to answer your question, I'm using this momentum to stay alive.

ScreenAnarchy: What did you and Ira learn from each other that has affected the way you each do your respective work?

Mike: I can't really speak for Ira, but every time I work with Ira, I feel like I learn something. The biggest things that he espouses in building stories for This American Life have to do with stories having an element of surprise and emotion and truth. I'm working of a screen adaptation of My Girlfriend's Boyfriend right now and I feel like I'm always trying to make those elements of my writing stronger and I feel like it's still a work in progress.

ScreenAnarchy: Your style of stand up is very story based, but did This American Life influence the way you put together your one man show - and then adapt it to film?

Mike: Well, yeah, in the sense that I feel like Ira holds me, and everyone who works on that show, to a really high standard. I think the thing that Ira and I have in common is that we're both very proactive in our careers. I mean he puts together a weekly radio show that is arguably better than documentaries that people have been working on for years. He does that EVERY WEEK! And I write jokes or stories that I write during the day and then sometimes perform them on stage that night. So I feel like we both have a sense that we're willing to try anything. And neither of us settles for anything that is mediocre really. So I think in the process of editing the film, we were both very willing to pick up the camera and shoot more stuff--and our editor, Geoffrey Richman (Sicko, The Cove, Murderball, Peter and Vandy) also brought this energy as well. We were willing to try anything--try taking a scene that was written for the end of the film and put it in the first five minutes, try cutting a character entirely--and I feel like that mentality is part of what I do, what This American Life does, and what Geoff Richman does.

ScreenAnarchy: There is a big turning point in the film in which you/your character learns from Marc Maron that telling the truth on stage can be more powerful and funnier and more meaningful than just telling jokes. As your character starts to do this, it's putting himself out there which is challenging at first. By now I'm sure you and your friends and family are much more acclimated to this in your one man show and via audio recording on the radio - but did doing the movie bring you back to those first moments of honesty in a new way?

Mike: First of all, it's not Marc Maron, it was "Marc Mulheren," the character he played. No, I'm kidding, of course it's based on Marc, and a composite of other comedians like him. But I don't think the movie made me want to do that more, it's kind of just what I strive for in the first place.

ScreenAnarchy: It's now your face on the big screen. You aren't a disembodied voice, it's recorded for all time, you are running around in your PJ's. Was that tough or were you ready for it?

Mike: Not just my PJs, by the way. Topless. That was something that I never thought would happen, in my life. I mean, I've been acting since I was in high school and I always had this thought in my mind - and people always laugh at me whenever I say this because they always think of actresses having this self standard, but men not having it - I was absolutely convinced I would never take my shirt off for the camera, because it's not a flattering angle of my body. I really look much better in clothes, and even then, it's not great. So yeah, that was unexpected and hard.

ScreenAnarchy: It's interesting that the sleep walking issues are portrayed as getting exasperated during the same time your career was taking off. Do you find that it comes and goes based off of big changes in your life, or is it now pretty under control? What will you do when your subconscious figures out mittens and zippers?

Mike: Well the reason that the mittens and zippers tend to work is that people have found over the years that if you have to do something as precise as open a zipper with your fingers, the specificity of the action causes you to wake up because it demands a certain focus. And that focus is a conscious focus and it makes you wake up. So, to answer your question, I don't know.

ScreenAnarchy: To prepare for the role, did you video tape yourself at night? You have a very specific physicality when you're sleepwalking.

Mike: I did not video tape myself sleeping, however, I did talk to my wife, Jenny, about it at length, and she has seen me sleepwalk many times.

ScreenAnarchy: As a huge fan of WTF, a totally aside question - had you crossed paths with Marc Maron early in your career? Did you have him channel his younger, notoriously dick-head self? Was he a stand in for anyone in particular?

Mike: I've known Marc for a long time- maybe 10 or 15 years. But no, I didn't have him channel anything. I just had him read the lines as realistically and in as relaxed a way as possible. And the way he did it was better than I could have imagined. When I'm working with actors that's sort of my goal, that the work that they do naturally is better than anything I could write or imagine for them.

ScreenAnarchy: What has been the reaction from your friends and family who are depicted in the film? Are you still in touch with your ex-fiancé?

Mike: Yeah, my ex-fiance is really supportive of the film. She read the book and the script and she's a wonderful person who is also a great actress, so hopefully in my next film I can have her play a part when it's not about her.

More about Sleepwalk With Me