DVD Review: USAGI DROP, not as fluffy as you might think. 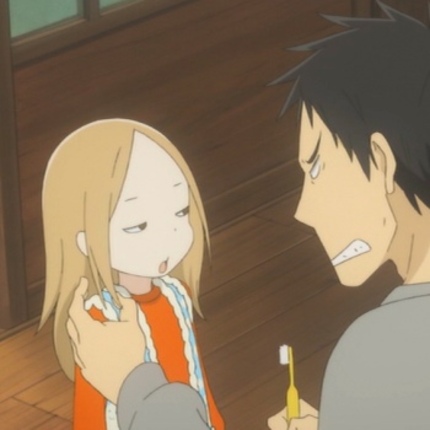 While getting a child will be a dream scenario to some, it will be a nightmare to quite a number of people who read this site I reckon. Just imagine: you're a successful single thirty-something with your own hobbies who is not overly fond of kids. Then, from one day to the next, you're stuck with a six-years-old girl you're supposed to raise. You didn't father her and any biological relation is tenuous at best and suspicious at worst, yet there isn't anyone trustworthy to hand her over to. And she's too cute and in need of help to just abandon to the wolves.

This is the story told in "Usagi Drop" (or "Bunny Drop"), an eleven episode anime series by Production I.G. which aired on Japanese television in the famed "noitaminA" slot, reserved for adult subject matters.

Not that the content of "Usagi Drop" contains any violence or sex, but it is an often brutally honest depiction of fatherhood, especially the impact it has on yourself as you grow into your new role as a parent. It shows the despair, the exhaustion, the paranoia, the self-sacrifice, the bodily mutation which grows you one extra hand and two extra sets of eyes... oh wait, no, that last one is just wishful thinking.
Yet it also shows the stretching of your limits, the improved efficiency that comes with the job. The sheer awesomeness of what you have to be at times.

Responsible for this series' first English-friendly release anywhere in the world is Siren Visual from Australia, and this is a review of that release. Read on!

When Daikichi attends the burial of his grandfather he sees a six-year-old girl called Rin running around the estate. To the embarrassment of the whole family, she appears to be a hidden daughter who gramps sired in the past on his young maid. The mother has since disappeared, leaving Rin in the care of the old man.
When the family coldly discusses how to get rid of the girl by way of orphanage, Daikichi grows disgusted with them all and in a flash of righteousness he tells Rin that she can go live with him for a while, to everyone's shock and horror. Rin accepts...

But Daikichi is a a thirty-year-old single guy who gladly spends his evenings either boozing with colleagues or improving his career through massive overwork. And he quickly learns that his current lifestyle may not be all that compatible with being a single father, as Rin needs plenty of attention and shows signs of emotional damage. On the other hand there is an almost audible click between Rin and Daikichi from day one onward.

But the sheer logistics of the situation (arranging regular meals, picking up Rin from the daycare, getting up at night whenever she wets her bed...) is grinding Daikichi to bits and he is forced to make some pretty drastic decisions...

If I had to sum up "Usagi Drop" in one word it would be "honest". If I could use two words they would be "brutally honest".
Rin is a smart and cheerful child, she helps Daikichi in maintaining the household, doesn't throw weird tantrums or break his stuff... as six-year-old kids go she is quite possibly the best you could get. Nevertheless she is a huge strain on Daikichi's very existence. After the first few days of overextending himself exhaustion sets in, never to leave again.

Forget any American sit-com shenanigans either. Rin is not a wise-cracking monster ten years beyond her age. Forget about things getting larger than life. Instead, "Usagi Drop" just shows the day-to-day reality-based consequences of having a child around, both negative and positive, as seen through the eyes of a freedom-loving thirty-something male. When a typhoon arrives it is just a heavy rainstorm, not a city-leveling apocalypse allowing for embellished heroics. And if a scene gets hilarious it's only because of its familiarity to parents, or the sudden embarrassment and "schadenfreude" of watching Daikichi miscalculate something.

But the series also shows the flipside: not having time for yourself also means not being lonely anymore. You see the love develop between parent and child, the two becoming a unit that is almost indivisible. Daikichi's constant overextension leads to him getting more efficient, a personal growth. To be more sufficient than he ever has been.

Director Kamei Kanta chose to use only the first half of the manga for his series, a choice which many fans felt was "cowardly" as it meant a few of the more controversial twists never made it into the animation. In my opinion though it is a masterstroke as it leaves the sole bizarre shocking fact (the lead's discovery that he has an aunt who is 24 years younger than him) at the beginning, allowing a focus on Daikichi and how his life changes from loner to full-fledged parent.

The animation is handled by Production I.G. and is impressive in its restraint. Forget about epic cgi sweeps and details fractalling into infinity: for "Usagi Drop" a more minimalist style is used which looks as if it consists of sketches and watercolors. It is completely fitting to the down-to-earth nature of the story and very pleasing to the eye. It looks simple but that is a bit deceiving: whenever there is colored glass or reflections in a scene some subtle trickery is used to enhance the images a bit, but this never becomes overused or too flashy.

In the end it is hard to fault "Usagi Drop" on anything. It is a sedate look at someone who sees his old life disintegrating, yet also shows the joys of discovering what replaces it. It feels real enough so that when Daikichi does get overcome and starts to cry, you may not understand why he cries, he himself may not understand why he cries, but it feels real and honest all the same.
Sentimental has become a curseword in films and series, mostly because it points towards sugary heartstring-pulling of the worst sort. Here, it is fitting rather than cloying, and never sugary. Any parent can relate to what is being shown here. And if you're not a parent: this is probably the best description you'll find of what it is like to become one.

There is one image in the final episode which makes me laugh, and keeps doing that no matter how often I see it. A testament to the strength of the series and the lasting power of its characters. Being a parent means getting used to hard(er) work and plenty of drudgery, and the anime shows it without flinching, leaving the question open whether or not Daikichi made the right decision. He reaches a conclusion, but each individual might arrive at a different one. "Usagi Drop" is honest enough not to overly stack the scales towards pro or con...

"Usagi Drop" is a brilliant slice-of-life series which doesn't pull punches. You feel for the characters and sympathize with their daily struggles. On top of that it is sometimes touching, sometimes hilarious, but never do you feel manipulated in your feelings and the situations encountered come across as real and honest.
This is an excellent series and I give it very high marks. Loved it, and it is definitely recommended!

Once again it's Siren Visual being the first out of the gate with an English-friendly version of a noitaminA series. It being Australia-specific means that the discs are coded PAL and only play on region-4 enabled players. 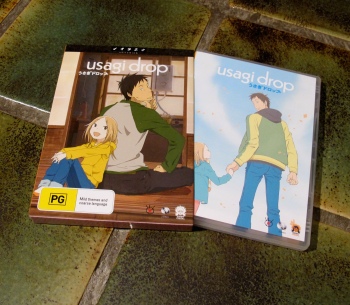 And the news is good: "Usagi Drop" features a lovely strong transfer that is easy on both eye and ear. It may not be high definition but with all the pastel colors and soft-looking sketchwork you may wonder just how necessary a BluRay would be here. The few times something needs to jump out in sharpness or color it sure does so adequately.
The only audio track is a Japanese 2.0 but it is a good one. While the series may not be flashy lots of the emotional content depends heavily on the voice-acting which is excellent. Also excellent are the English subtitles which try to stay as literal as possible. This means that sometimes untranslatable sentences, jokes and customs get explained with some extra text at the top of the screen. I applaud this as it keeps the conversations natural (one of the series' strongest points after all) and the extra inserted text is quite educational.

Speaking of extras, there are several. Included are all four bonus episodes which were on the Japanese DVD releases. These little five-minute ministories make for some nice after-viewing for those who have finished the series, although by themselves they aren't strong enough to win anyone over I think. It also shows that the series' length of eleven episodes is long enough, as any more would turn Daikichi's emotional journey into a regular soap.

Next there are some promos and the textless opening and closing songs. Note that there are four different opening credits depending on season, and each episode has its own unique end credits, all eleven of which are represented here.
No behind-the-scenes which is a shame (would have loved to hear the director and writer comment on the series) but as extras go these are quite nice.


All in all this yet another mighty fine noitaminA release from Siren Visual.
You can order these discs through their site (link). 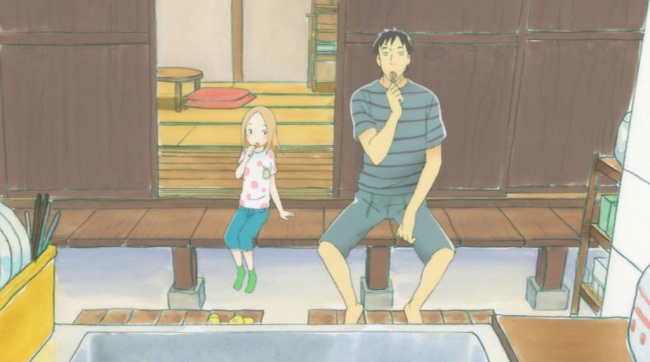