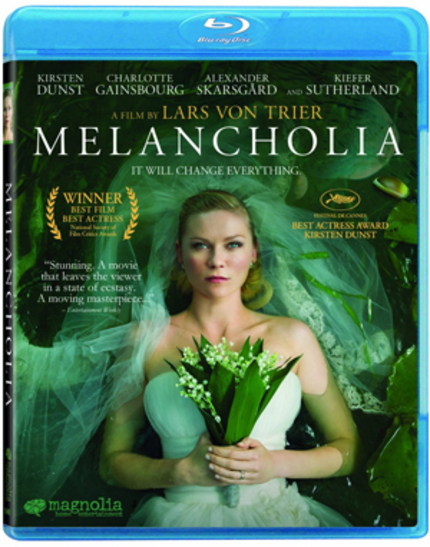 My selection for biggest bummer of the year, Lars von Trier's Melancholia, is set to hit US Blu-ray and DVD this March, and I couldn't be more excited!  The film has been quite divisive, with many people, including our fearless leader Todd Brown, coming down on the nay side, but I loved this flick.  Now you can choose for yourself.  I haven't seen the disc, but the film was a technical and audio/visual work of beauty, and with Magnolia's track record, I can only imagine it will look and sound terrific.  Read below for the press release, disc details, and pre-order link.

"Stunning. A movie that leaves the viewer in a state of ecstasy...marked by an astonishing profundity of vision."
- Entertainment Weekly

"Von Trier presents his vision of the last moments of human life in a poetic nutshell in his prologue. This includes some of the most beautiful slow-motion sequences I've ever seen."
- Chicago Sun-Times

In the "truly special" (Salon), story MELANCHOLIA centers on the wedding celebration of newly married couple Justine (Dunst) and Michael (Alexander Skarsgård), taking place at the house of the bride's sister Claire (Gainsbourg), and brother-in-law John (Sutherland). Despite Claire's best efforts, the wedding is a fiasco, with family tensions mounting and relationships reaching their breaking points. Yet at the same time, a deadly planet called "Melancholia," is quickly hurtling towards Earth, ushering its ultimate destruction. The "masterwork of grandeur" (The Washington Post) explores what happens as the family comes to grips with their fears and faces the forthcoming end of their lives. With MELANCHOLIA, "Von Trier has created a stunning treatise on family, relationships, expectations, tradition and depression that is as rich and layered as the towering wedding cake" (Los Angeles Times).

Including special bonus features such as cast interviews, behind the scenes looks and a making of featurette, witness the film movie "that is more than worth your time" (CinemaBlend) when MELANCHOLIA becomes available on Blu-ray Disc and DVD for the suggested retail price of $26.98 and $29.98, respectively.

Synopsis
In this beautiful movie about the end of the world, Justine (Kirsten Dunst) and Michael (Alexander Skarsgård) are celebrating their marriage at a sumptuous party in the home of her sister Claire (Charlotte Gainsbourg), and brother-in-law John (Kiefer Sutherland). A planet called "Melancholia" is heading directly towards Earth and threatening to collide. Meanwhile, tensions are mounting and relationships are fraying as the family deals with their fears.

I'm really not a fan of the cover art, all of that text really clutter it up, but I'm willing to make do to own this gem.

Pre-order Melancholia on Blu-ray at Amazon