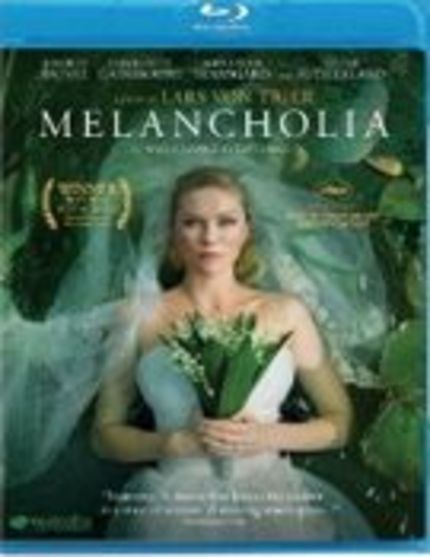 Not a day has gone by since "Melancholia" that I have not thought about it. For a film to have that kind of impact on my day to day consciousness is exceedingly rare, although in 2011, this is the second of two such works, the other being Terrence Malick's "The Tree of Life". Malick's film, and "Melancholia", from lofty provocateur Lars Von Trier, almost seem to be complimentary in their opposition of one another by design. The former is a worshipful experience that celebrates the "way of grace", and the inherent beauty in all things; while the latter tells us that we are alone in the universe, and more than that, we're doomed to a meaningless extinction. "The Tree of Life" actualizes the beginning of the universe while "Melancholia" delivers the end; one is the alpha while the other is the omega. And yet, they are two sides of the same existential coin: Both films hail from deeply personal places within their writer/directors, and both contain undeniable truths laid out in the most cinematic of ways. They are, in a word, overwhelming. I may not be treading new ground with this comparison, but I cannot imagine what it must've been like for that first wave of filmgoers at the 2011 Cannes Film Festival to experience these works for the first time within days of one another.
I must confess that up until "Melancholia", the legacy of Lars von Trier has been a glaring blind spot on my personal filmography. Sure, I'd read plenty about the infamous and often controversial Danish filmmaker over the years. But this would be my first excursion into his work. And what a trip it is. "Melancholia" is a dire yet infinitely approachable work. It opens with an unexplained, dialogue-free eight-minute slow motion visual tour de force set to music from Richard Wagner's spellbinding composition "Tristan and Isolde". This sequence, made up of elegantly realized surreal images of the main characters and their locales, is peppered with ominous shots of the earth precariously interacting with a much larger, much brighter heavenly body that is later identified as the roaming planet Melancholia. Then finally, the collision of collisions. Clearly all of this is a metaphorical representation of Kirsten Dunst's character's troubled state of mind, but just how much is literal and how much isn't remains to be seen.

The film, shot almost completely handheld, is neatly divided into two halves. The first half, named after Dunst's character Justine, is a prolonged look into the self-inflicted breakdown of her own opulent wedding reception. This is perhaps one of the most brilliantly awkward slow burning deteriorations of a social event ever committed to film. But more than that, it's an acknowledgment of the futility of man-imposed order/ritual. The wedding party, when striped of any personal or spiritual depth, is quickly made trite and meaningless. On the flip side, even Justine's mean-spirited truth-saying mother (Charlotte Rampling) who does not believe in marriage is also rendered meaningless. All belief and behavior manifested of human logic - particularly the simple, socially agreed-upon morals such as monogamy among the betrothed, or the expected courtesy to be extended to guests at such a reception simply crumble - and they might as well crumble - if we are alone in the universe.

Justine is reflexive of von Trier's own admitted debilitating depression. "Melancholia" has the audacity to tell us that only through the dark conscious that this state inflicts can one truly be in tune with the natural order, and take solace even in the fact that it is doomed. Justine "knows things" - not only the film's larger proposed truths about life being only on Earth, but knowledge sited by more level-headed characters as "trivial" (for example the number of bean in the bottle for a wedding reception guessing game). In von Trier's worldview, the importance of life on Earth is the same as how many beans are in that bottle. And like life on Earth, the game is doomed. Call it dark, call it nihilism, but when presented by "Melancholia", it's simply matter of fact.

While I in fact happen to fundamentally disagree with von Trier's bleak, Godless outlook, the film cannot be dismissed on these grounds. All the characters, as written by the filmmaker, harbor relatable qualities while successfully resisting becoming types. Played with spectacular precision by Dunst, Justine is an unsettled depressive who literally and figuratively strips away the world's hollow constructs to bathe in the apocalyptic light of "Melancholia". I would guess that mental health professionals might not be thrilled with the notion of depression as enlightenment, per se, but here it's the lens that allows the clearest view of everything. In a world where all things of comfort and value (faith, science, commitments, etc.) are for naught, the least sane state becomes the last bastion of clarity.

Of course, denial can be a powerful thing. Denial, with a dash of apathy. Justine's sister Claire (Charlotte Gainsbourg), the even keeled one, is put through von Trier's paces as the "normal" person in the story. Yes her sister sabotages the wedding she worked so hard to make perfect for her, but she has enough compassion to recognize mental illness when she sees it, and to care for Justine as best she can beyond the reception from hell. Claire and her astronomer husband John (Kiefer Sutherland) opt to let Justine stay with them in their luxurious secluded country club-like home. In this time, the great glowing celestial body Melancholia is (depending on whom you believe) scheduled to either precariously fly by the earth in a near miss, or demolish it upon impact. Although there are no TVs or radios imparting information on the state of the outside world (ala Shyamalan's "Signs"), Claire does take a peek at orbital "dance of death" diagrams online, thereby violating the wishes of her controlling husband, who sees the whole situation through rose colored glasses.

For me, the conundrum of denial-based optimism is at the core of what makes "Melancholia" ring so true at this point in time. By utilizing point-of-view shots of users of an adjustable homemade stick & wire viewing apparatus crafted by Claire and John's young son, von Trier ingeniously is able to quickly show how much closer or farther planet Melancholia is to us. Characters in the film need to wait only five minutes to monitor the movement; thanks to the wonder of film editing, we don't even have to wait that long. Through the course of this monitoring, John makes it very clear that the experts all agree that the doomsayers are wrong, and that Melancholia will pass us right by, and it will be beautiful. Claire, re-assured, looks through the viewing apparatus to see that the looming planet has in fact receded slightly. With this little bit of viewed hope coupled with her husband's relentlessly positive outlook on earth's future, the weight is lifted from her. But all is not what it seems, as Justine knows all too well. A real-world parallel is the current financial crisis in the U.S. Our leaders seem to think that by announcing that the crisis has passed, that they can will it passed, when it is in fact clear to so many that it is at best holding steady, perhaps getting worse. No one wants that to be the case, so we chose to place our hope in the proclamation of improvement and the hairline of visible improvement, while it lasts. But the dread remains, and we can't help but notice that chronic unemployment, widespread failure of once-stable businesses and crimes of desperation continue at alarming levels. And yet the claim is that Melancholia is really passing right by. The end is nigh; best to head for the magic caves...

Ah yes, the magic caves. While Justine pulls no punches in her terse relations to all other adults (a reaction, I presume, based upon their default state of artifice and decorum - something that sickens her deeply, even as she herself hails from the immersive phony world of advertising), she repeatedly finds refuge in the presence of young Leo (Cameron Spurr). Even during her reception, she opts to put the tired boy to bed than hang around cutting the cake or whatever other frivolities are expected of her. Eventually, she is able to finally make good on a long-delayed promise of building magic caves with Leo. Indeed, once again we have a shared quality with Malick's "The Tree of Life" - an unabashed affinity for childhood, and childlike innocence. When the Finale rolls around, and all artifice is cast aside, it is interesting to note the outward demeanors of everyone involved, and how this aspect may play into them.

Although I've said much about Lars von Trier in relation to Terrence Malick due to their complimentary films being in such obvious proximity of one another, they do not share much else in common. After all, Malick personally won't say a thing, while von Trier won't shut up. No, by my estimation, I'm noting a professional resemblance to the great Ingmar Bergman. Both Bergman and von Trier write and direct from deeply vulnerable, emotional and darkly spiritual places. Both continually challenge our fundamental faiths and/or social orders. Finally, both boast long filmographies that are best approached in a certain order, and which are made up of distinct, unique artistic phases. Indicative of the very little von Trier I've experienced since "Melancholia", it is all bold, confrontational and often difficult work. Granted, where Bergman exuded an inescapable high falutin respectability, von Trier offers eye-rolling provocation and controversy (I won't go into the whole Cannes Film Festival "I'm a Nazi" thing, but that is nonetheless the latest and most notorious offense). However, Bergman always clung to the fact that above all else, film must entertain (ponderous exploration and all). And somewhere in that, there is a common ground.

In a film full of Revelation, Dunst's performance is a major one. When we first meet her properly, during a gloriously absurd sequence of her stretched limo's inability to navigate the narrow winding roads to the estate hosting the reception (another sly metaphoric attack on unrestrained wealth in the modern world), she is the perky, bubbly girl of "Bring It On", and "Spider-Man". Like "Spider-Man 2", "Melancholia" opens with imagery of Dunst in lingering close-up. (This film is also "about a girl".) That film's ends with her in a wedding dress; just where this one begins. It's just a hint how von Trier will go on to deconstruct her established persona thoroughly and completely by the end of the film. And she will prevail for it. Lars von Trier, if he would only let himself, would prevail as well, as he has made one of the most unforgettable, unshakably unique films of this year.