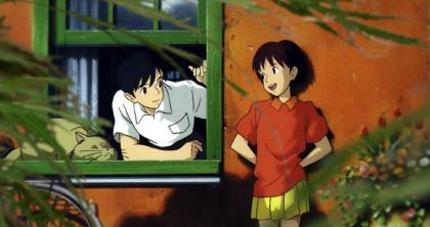 Yoshifumi Kondō's Whisper of the Heart is undeniably a magical film, despite there being maybe ten minutes of anything fantastical on screen throughout the entire running time (none of which is actually happening). For all the otherworldly places Studio Ghibli have taken us over the years, arguably their biggest triumphs are the films where 'magic' means the sense of wonder that comes from an epiphany, realising no matter how mundane your life seems it can still be pretty awesome every now and then.

On paper, Whisper of the Heart could practically be a soap opera; the heroine, Shizuku, is an ordinary Japanese schoolgirl with exactly the same concerns as anyone else her age. She's getting to the point she needs to start thinking about college entrance exams; her quiet, introspective friend has a secret admirer and doesn't know what to do about him, and she's wondering if the life her parents (and pushy older sister) envisage for her is really what she wants.

Then one day when Shizuku has to take her father lunch at work, she catches sight of a cat riding the same train into the city. Suddenly fascinated, when the cat alights at her stop Shizuku wonders where it's going, and follows the animal to a small antiques shop tucked out of the way in an upmarket suburb high above the urban sprawl. The idea of something so out of the ordinary sticks with the girl, tempting her to go back, leading to a chance meeting that prompts her to make a surprise decision about what she wants to do with her life.

Whisper of the Heart is basically telling the audience to follow their dreams, but other than one jarring misstep at the very end, Hayao Miyazaki's screenplay and Kondō's direction have a confidence and lightness of touch that belies the shop-worn themes. Extrovert and talented, Shizuku's obviously different (a budding writer, she's evidently literate enough to translate John Denver into Japanese) but she's not presented as better, per se: in many respects she's as naïve as any of her friends.

The melodrama is laudably even-handed, by and large. No-one does anything outright bad - Whisper of the Heart is far too gentle a film for that - but the young leads clearly aren't perfect, prone to jumping to conclusions, bristling at any slight and sniping at each other without thinking. While their individual character arcs are relatively obvious, they're still beautifully handled, and (perhaps unintentionally) the narrative pointedly avoids making too much out of a couple of pivotal moments other filmmakers would have been all over.

It's a slow, patient buildup to quietly triumphant moments of unspoken achievement, like Shizuku's climb through the city, or an impromptu musical performance in the back room of the antiques shop which ranks as one of the most joyous set pieces Studio Ghibli have ever produced. There's a subtext of calm and sympathy running through the whole thing, embodied by the shop's proprietor. When Shizuku tearfully solicits his approval of her decision late in the film the feeling Kondō and Miyazaki care about what she's going through ensures the conversation never tips over into out-and-out schmaltz.

Admittedly sixteen years on Whisper of the Heart does look undeniably dated, riding on a slightly exaggerated, more comic-book aesthetic Ghibli had conspicuously moved away from only a few years later. And the fantasy sequences are actually some of the film's weaker moments, heavily reliant on some fairly throwaway backdrops and with much of the animation lacking in detail. They still carry dramatic weight - the rest of the story wouldn't be the same without them - but for all their charm there's no ignoring they were fairly second-rate by the studio's lofty standards, even back then.

And the ending, though it's apposite and all, smacks of Miyazaki rushing towards the credits in a panic. It's a sweet enough way to wrap things up but whether or not it was in the original comic, the last exchange of dialogue is rose-tinted daydreaming rather than any kind of magical realism. It's a hard thing to criticise given again, this is a gentle, wistful film, not a gritty character drama. But the rest of the script openly acknowledges that yes, sometimes these kids make mistakes - they hurt, they feel pain - so trying to finish on a note of wide-eyed fantasy just feels wrong.

Nonetheless, it's not hard to see why Kondō was thought of as Miyazaki's protégée. Whisper of the Heart rates as a fantastic début, and makes Kondō's sudden death three years later (attributed to overwork) all the more tragic. The quality of Ghibli's output makes it hard to play favourites, but this is unquestionably an outstanding film, sadly neglected in favour of movies where Miyazaki's name as director meant a bigger marketing push. Light-hearted and funny yet deeply moving, simultaneously more human and more enchanting than nearly anything else Ghibli have ever done, Whisper of the Heart comes hugely recommended.

Studio Canal UK's BluRay release of Whisper of the Heart - available to buy from today (January 9th) - is short on extras, but gives the film a quality high-definition release, if one that warrants some minor reservations. The BluRay goes straight from Studio Canal's logo to the main menu, a simple static setup using stills from key scenes that looks good and proves easy enough to navigate. The film is divided into 24 chapter stops.

The Japanese audio track is solid, if unspectacular in stereo - unsurprising, given the age of the film and the low-key story. There are no real challenging passages of audio liable to bother anyone's speakers and even the uptempo passages in Yuji Nomi's score are largely fairly restrained. The English track deserves a mention - while it suffers from some awkward translations compared to the subtitles and the usual overly stilted line readings, the leads sound far softer and more natural than many commercial dubs. While it means Shizuku's translation work doesn't have quite the same narrative significance, it's worth a listen even if you're comfortable reading subtitles.

The picture is good, but this needs some qualification - it's a quality transfer, sharp, and vivid with only a minimal amount of grain and the odd scene that seems to have slipped very slightly. At the same time, in some respects it seems too clear - enhanced so much that the backgrounds sometimes take on a weird cardboard quality and characters frequently seem to be standing several millimetres off the frame (some of the menu stills and the opening scenes clearly show thin black outlines). Maybe this is down to the nature of the source, and it's certainly subjective to some extent - rest assured nothing here comes remotely close to the ghastly BluRay transfers some Hong Kong distributors tried to foist on the market. Nonetheless, videophiles will more than likely pick up on it.

Extras are numerous, though of pretty varying quality - first is the usual Ghibli feature where the complete storyboards for the film are included as a picture-in-picture option, for any animation fans or curious viewers. The background art from The Baron's Story (the fantasy sequences) is included as a fairly perfunctory five minute slideshow, and while it still carries the same otherworldly quality seen in isolation it's also obvious how relatively crude and repetitive much of it is seen in closeup.

Four Masterpieces of Naohisa Inoue is more interesting, though a puzzling inclusion - Inoue is the Japanese artist who provided those backgrounds, though that's never explicitly stated on the disc. This is a half-hour time lapse showing four of the artist's paintings coming together, little by little. Though Inoue's style still seems very broad, Impressionist and sketchy the pieces here are far more impressive when perused at leisure; they feel much more fully realised than the settings for The Baron's Story.

The rest of the bonus features are fairly disposable. Behind the Microphone is an eight-minute promotional clip from a previous home video release, with the English voice actors (looking much younger) talking up their roles. It's predictable fluff, though Brittany Snow and Ashley Tisdale as Shizuku and her best friend Yuko come across as genuinely enthused - not worth watching more than once, then, but presumably someone will appreciate it.

The original Japanese trailers and TV spots are somewhat awkward - going for ominous gravitas with slow wipes, cello music and no dialogue seems fairly comical in retrospect - and they don't really give any sense of what the film is actually about. These can only be played all together, TV spots or trailers, though they do come with English translation for both dialogue and intertitles. The Studio Ghibli Collection is actually a mix of original Japanese and US trailers, with no mention of any accompanying DVD or BluRay; we get Nausicaa, Ponyo, Howl's Moving Castle, Tales from Earthsea, Laputa and Spirited Away.

Unfairly neglected, for the most part, Whisper of the Heart deserves more recognition as arguably one of Studio Ghibli's strongest, most memorable films - an outstanding piece of work, an enchanting, truly magical little drama that leaves you wondering what Yoshifumi Kondō might have gone on to do had he got the chance. Studio Canal's UK BluRay is somewhat short on extras, and seems to have been a touch heavy-handed with the source material, but it's still a quality high-definition transfer that definitely comes recommended.
Sign-In to Vote
Tweet Post Submit