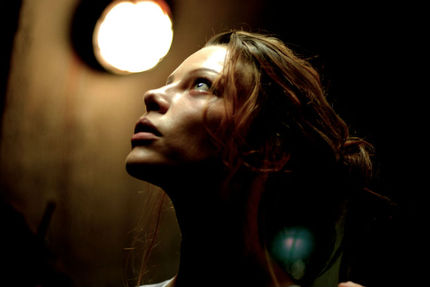 Michael Biehn, Milo Ventimiglia, Michael Eklund, Lauren German, and Rosanna Arquette star in a claustrophobic tale set in the basement shelter of a high-rise apartment building in Manhattan, where a small group of people have taken refuge after an attack on the city. The film played the festival circuit and is now poised for limited release in the U.S. tomorrow, featuring additional footage that was not included in the festival cut.

I saw The Divide at SXSW and was dazzled by the visual elements -- but repelled by the characters. The new version expands the running time from 110 to 120 minutes; as far as I can recall from my first viewing, what's been added are little bits of explicit blood, violence and other nasty unpleasantness; my opinion, however, remains the same.

Despite the claustrophobic setting of The Divide, the narrative feels fluid and the framing never becomes repetitive. Some of the most effective imagery appears late in the film and looks very stylish indeed. Yet it's all in service of characters who, generally speaking, start off bad and simply get worse, descending into outright Comic Book Evil or its (arguably) lesser cousins, Passivity and Complicity. 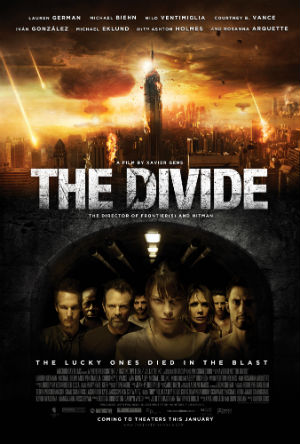 Shelagh M. Rowan-Legg saw the film next; her review was re-posted in time for the Sitges fest in October:

While most apocalypse film will present most people as good, ready to help each other, this comes perhaps because of some sense of hope. In The Divide, there is no hope, and so these humans are reduced to their worst and in most cases most horrifying characteristics. The end comes with both a bang and a whimper.

Kurt Halfyard saw it at the Toronto After Dark Film Festival, also in October:

The Divide is going to split audiences (sorry, couldn't resist) with its duel nature both as a gristly horror freak-show, and a slow-burn science fiction thriller. If you read between the lines, you won't find subtext as much as a delicious sense of ironic - and laconic - humour; perhaps the film's chief surprise.

Finally, Eight Rooks, one of our British correspondents, caught it at the Leeds International Film Festival in November:

Dark, unsettling and with a roof-raising climax, Xavier Gans' peculiar take on the apocalypse is far and away one of the highlights of 2011, and for all its flaws still comes hugely recommended.

The Divide opens in limited release in the U.S. tomorrow. Check the official site for theater locations and information on showtimes.

Links to the reviews don't work.