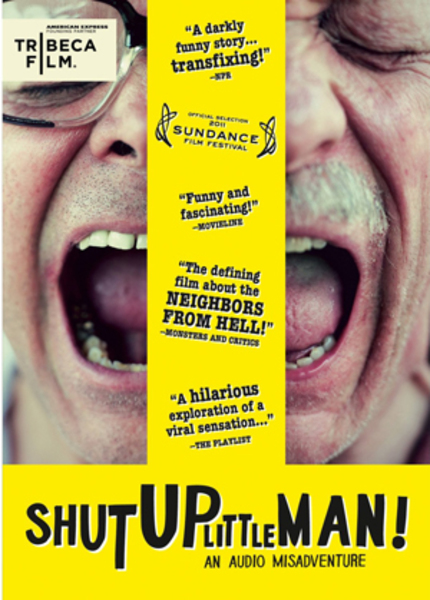 I had no idea what to expect when I received Shut Up Little Man! in the mail. I'd heard that it was good, but I didn't bother seeking out any other information on the film. It was a film that very well could have slipped through the cracks for me, but thankfully it arrived in a package of review discs, and I'm glad I've gotten a chance to see it. Shut Up Little Man! is a film that grows on you and the ideas in the film plant seeds that bloom long after the film is over. What seems like a simple film about a couple of guys who argued loudly could mean so much more to the person who chooses to explore. The Tribeca Film DVD series releases Shut Up Little Man! in a pretty decent DVD edition with an okay selection of extras, the edition details aren't terribly impressive, but I really liked the film, so this is definitely recommended.

The most important audio recording released in the nineties wasn't a collection of songs by a self-tortured alternative star. The most important recording release in the grunge era was entitled SHUT UP LITTLE MAN! It was a covert audio recording of two older drunken men living in a small flat in San Francisco, who spent their available free time yelling, screaming, hitting and generally abusing each other.

The first viral pop-culture sensation began in 1987 when Eddie and Mitch (two young punks from the Midwest) moved next door to Peter Haskett (a flamboyant gay man) and Raymond Huffman (a raging homophobe). This ultimate odd couple hated each other with raging abandon, and through the paper-thin walls their alcohol-fueled rants terrorized Eddie and Mitch. Fearing for their lives, they began to tape record evidence of the insane goings-on from next door.

Exploring the blurring boundaries between privacy, art and exploitation, SHUT UP LITTLE MAN! AN AUDIO MISADVENTURE is a darkly hilarious story.

Before I go off on a tangent: this is a documentary about the phenomenon created when a pair of young men recorded the loud arguments of their next door neighbors and began sharing the tapes with their friends. The result was one of the first "viral" sensations and the audio cassette version of a "found footage" film, but this one was all real. The tapes are hilarious, and the characters in them are almost caricatures in themselves, but the real story here is in what happened later. All you need to know about the actual tapes is in the middle paragraph of the synopsis.

The real engaging part of the story is what happened to the tapes after they became a sensation. Eddie and Mitch, the two young men who turned their suffering through interminable bouts of insomnia to bring these sounds to the world, seemed to have only the best of intentions when they began sharing these tapes with the world. What happened once people started using the tapes to make money is an almost dizzying journey down the rabbit hole of copyright law, intellectual property.

This is the piece that stayed with after the final credits rolled. Not necessarily the legal part of the question, though it is interesting, but the moral implications of the whole thing. Most of us have had to suffer through loud neighbors, or at least through angry couple having arguments in inappropriate venues, like Denny's, and felt uncomfortable being a party to the conversation. How many of us have taken that next step, though, and recorded these arguments? Well, judging by the daily exponential expansion of youtube and the meme culture, more every day.

I'm not one of those people, though I won't deny that I've shared juicy tidbits about my day with friends and family, I just don't see the need to spread it around the Internet. If you are the person recording the shenanigans, what are your responsibilities? What are your rights? Do you own that performance, or does the person performing have some legal right to their antics, or at least their privacy? When stuff like this happens in public, there doesn't seem to be any way to stop someone from trying to make a buck off it.

The film becomes more an exploration of ethics and legalities than a film about these crazy tapes, and that's what makes it a success. The film makers aren't shy to pry into every corner of this phenomenon and try to cover all of the angles. The result is a film that, while focusing on the instigators, manages to show them from different enough points of view that they don't always come out shining. Did anyone do the right thing? Can a person claim copyright on an argument? There are tons of interesting questions, both answered and unanswered, addressed in Shut Up Little Man!, and for those questions it is definitely worth checking out.

Well, it's a low budget documentary on DVD. What can you expect? There are a few artfully shot recreations that look pretty good, but for the most part it is flat documentary lighting, and that's just fine. There are no problems with the transfer, it is anamorphic and sharp, and that's that. The audio is similarly serviceable. I had no technical complaints with the disc.

There are a couple of interesting extras on SULM!, including some extended interviews, extended recreations, and a visitation to the old house. Nothing mind-blowing, but the film does that for you.

Overall I can heartily recommend Shut Up Little Man! without hesitation. This little film deserves a big audience.

Order Shut Up Little Man! on DVD at Amazon