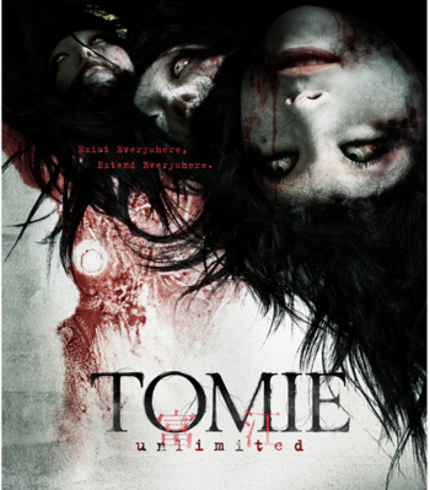 Director Noboru Iguchi (The Machine Girl, RoboGeisha) is back with his entry in to the ongoing Tomie horror film series based on a popular manga by Junji Ito.

Tsukiko (Moe Arai), who belongs to a photography club at high school, always feels inferior to her elder sister, Tomie (Miu Nakamura). Tomie is breathtakingly beautiful and popular among the male students, including Toshio, whom Tsukiko is secretly in love with.

One day an awful accident kills Tomie right in front of her younger sister. Since then Tsukiko suffers from a nightmare night after night. A year later Tsukiko and her parents are surrounding a birthday cake to celebrate dead Tomie's 18th birthday. Suddenly they hear an eerie knock at the door. Unbelievably, it is Tomie. She's back. The father and mother blindly welcome Tomie in tears, but Tsukiko feels instinctive fear. Tomie gradually reveals her true face, but only when she is with Tsukiko. Now Tsukiko's nightmare becomes reality, and the terrifying days begin...

Tomie Unlimited is released in the UK on DVD &  Blu-ray on 23rd January 2012 by Bounty Films.

From the synopsis, it seems like a reboot, but we can at least be sure it'll be bloody coming from Iguchi.  Disc details and pre-order links are below.