Meet The New Face Of TOMIE 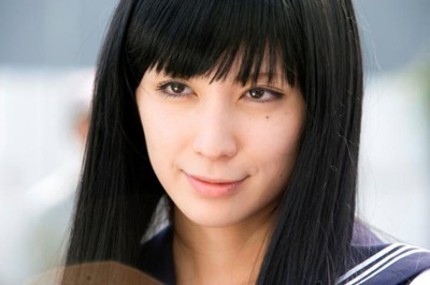 Junji Ito's Tomie has proven to be one of the most popular and enduring horror properties in Japan, the original manga spawning an ongoing series of films. Thought the films have varied widely in terms of quality the core story of a high school girl returning from the dead to wreak havoc has proven versatile enough to keep drawing in new talent in the hopes of finally producing the definitive screen version of the tale.

And the latest to attempt it is Machine Girl / Robo Geisha director Noboru Iguchi. Iguchi shot his version of the tale - title Tomie: Unlimited - immediately wrapping on Zaborgar and though he brought his regular prosthetic and CGI effect crew with him the tone of Tomie: Unlimited is a major step away from what fans have come to expect from Iguchi. This is a serious horror tale, one played straight for scares.

Tsukiko, who belongs to a photography club at high school, always feels inferior to her sister, Tomie. Tomie is very beautiful and popular with male students. But one day, Tomie dies in an awful accident right under Tsukiko's nose. Since then, Tsukiko suffers from a nightmare everynight.

One year passes and on dead Tomie's 18th birthday someone knocks the door of Tsukiko's house. Unbelievably, it is Tomie. She's back. The father and the mother blindly welcome Tomie but only Tsukiko feels instinctive fear. Tomie gradually reveals her true face only when she is with Tsukiko. Tsukiko's nightmare becomes true... and horrible days begin.