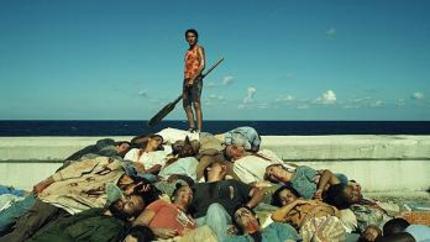 At first glance Alejandro Brugués's zombie comedy Juan of the Dead doesn't sound too promising. Unless you're a devoted follower of the diverse strands of Latin American cinema the idea of an unknown director shooting an affectionate tribute to Edgar Wright's 2004 cult hit probably seems like cause for a patronising smile at best. Oh, Cuba made a horror movie? That's so precious! If that does sum you up, time to eat humble pie - the first independent film out of the country in fifty years is not merely legitimately good, it's god damned great. Juan is definitely a fan film, an unrepentant crowd-pleaser which spends rather too much time winking at the audience, and without Shaun it's doubtful this would even exist. But it's slick, professional, raucous entertainment, laconically smart and hilariously profane by turns, and more than stands on its own two decaying feet.

The title isn't an accident - the main plot beats follow Shaun almost note for note. Juan (Alexis Díaz de Villegas) is more active than Wright's hero, a tanned, laidback horndog with a witty rejoinder for every occasion, but he's still a slacker who bums around Havana doing not-quite-legal odd jobs on the side with his best friend, a foul-mouthed jester who's basically the Nick Frost role. Like Shaun, when the undead break free these two barely notice - and the comedy comes from their enterprising attempts to reorganise their usual routines around saving their nearest and dearest from the rotting hordes laying waste to the streets. But where Wright sent up the sleepy British 30-something male who shies away from confrontation and drifts lifeless from one day to the next, Brugués uses Juan to pen a love-letter to his beleaguered country and its populace.

Juan and his buddies listen with bemusement as the state TV channel repeatedly insists the zombies are American dissidents trying to bring down the regime. Despite promises to Juan's despairing daughter that daddy's finally done with profiteering the two men can't resist the opportunity to turn a crisis into an opportunity for some quick cash, and along with a motley crew of survivors scour the city offering to take care of people's family members or relatives who've suddenly developed a taste for human flesh. They train the neighbours using military drills intended to fend off hordes of US marines bent on bringing down Castro's paradise, and watch as hundreds of people flee the harbour in ramshackle flotillas headed for America and the promise of safety.

Part of what makes Juan of the Dead such a pleasure to watch is the way none of this feels remotely like a polemic. Crowd-pleaser or otherwise Brugués takes his time getting started; Juan's friends may be archetypes (the sassy drag queen and his hulking boyfriend, say) but they're still relatively believable, quickly, deftly fleshed out with a few choice lines and instantly grounded in the story. The film might be a fantasy but its cast make wry, sarcastic observations about the mundane reality of living in Cuba because they're Cuban, not because Brugués wants to preach at you.  It's simple, yet sharply observed social commentary with buckets of gore on the side - perhaps not 'Man is the real monster', but definitely acknowledging we tend to be our own worst enemy.

But again, Juan is a crowd-pleaser at heart. While it does make this a little too obvious on occasion, with pacing that feels as if everyone's waiting for you to applaud the jokes, it's consistently funny enough it hardly matters. You've probably seen much of it before, but de Villegas and company turn in such wickedly dry performances you can't help laughing, from the predictable bystanders killed off accidentally to the puerile macho banter to the nudge-nudge meta-humour. 'Some of them move very slowly, some of them move really fast', Juan observes to his hand-to-hand combat class. 'Can anyone tell me why that is?' (Blank stares all round.) 'Shame,' he finishes, deadpan. 'I was hoping someone could clear that up for me.'

And it's far more polished than the pedigree might suggest. Not only is the Spanish production funding clearly front and centre, Brugués and DP Carles Gusi prove as confident behind the camera as many a long-time veteran the world over. The budget clearly wasn't that high, but the cinematography's crisp, glossy stuff and it's hard to feel too bothered you can see the joins in the CG when Brugués pens set piece after set piece with all the unrestrained glee of a Michael Bay production but none of the boneheaded juvenile petulance. Note, too, that while the choreography won't see Yuen Woo Ping losing any sleep it's still genuinely fun to follow - a montage when the principals mince a crowd of the undead with their signature moves is shameless pandering, but it's so well done most viewers probably won't care.

Indeed, it's hard to fault Juan of the Dead too harshly when for most people who take the trouble to go and see it, the flaws more than likely just won't matter. This is a production tailor-made for packed Midnight Madness screenings or beered-up Friday nights, and the fact Brugués managed both to script something so affably dumb and to be intelligent, witty and even compassionate with it makes marking his film down for putting on a show feel a tad cruel. The over-riding impression this is very much for the fans won't convince everyone there's life in the undead yet, though, and it's a shame Brugués couldn't have played things just a little less safe. Regardless, anyone who can stomach the gore and wants to kick back with a affectionate genre homage that's every bit as good as - maybe even better than - its inspiration should consider Juan of the Dead strongly recommended.

(Juan of the Dead was screened at the 25th Leeds International Film Festival, which ran from 3rd-20th November 2011.)