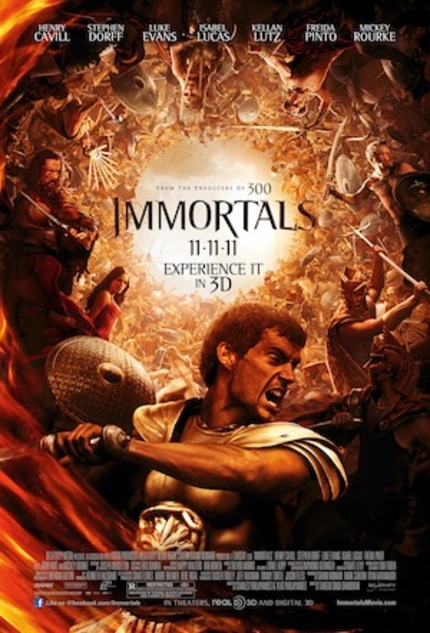 The idea of Tarsem, a visually-oriented director if ever there was one, making a historical action picture in 3D is a natural matching of talent and technology. In Immortals, Tarsem and an army of assistants have created a visually splendid epic, jammed to the gills with eye candy and slow-motion severed limbs. And who knew headgear would be so important in the 13th Century B.C.E.?

The story, of course, is bollocks, both in the literal and figurative sense. Our hero is Theseus (Henry Cavill), a bastard who loves his mother. He has been trained by an old friend of the family (John Hurt) from birth to become a mighty warrior, and comes of age as King Hyperion (Mickey Rourke) is leading his gigantic army on a rampage of destruction across Greece. Hyperion is seeking the Epirus Bow, a legendary and magical weapon that, he is convinced, will guarantee victory against all his enemies.

"A man's seed is his greatest weapon," growls the merciless Hyperion, shortly before ordering that a man's testicles be pummeled. Hyperion does not like traitors, it seems, even when they willingly provide helpful information about his enemy. Hyperion believes in killing the messenger, eliminating witnesses, slitting the throats of pregnant women, and murdering mothers in full and graphic view of their adult children. "Witness Hell," he growls -- Hyperion does a lot of growling -- as the blood spurts out in glorious 3D, arcing through the air as the globules separate and another lifeless body crumples.

Really, it's difficult to imagine that blood and body parts have flown through the air in slow motion with any more grace and beauty than is displayed in Immortals.

It's all exceedingly silly, a Saturday afternoon matinee special for adults with a fondness for sword and sorcery pictures. The sorcery comes courtesy of gods in disguise. Zeus (Luke Evans), his daughter Athena (Isabel Lucas) and son Aries (Daniel Sharman) have a special interest in mankind, but the gods have established a law forbidding gods to reveal themselves to humans or interfere in their affairs. Zeus, evidently, had a grandfather clause permitting him to train Theseus disguised as an old man. 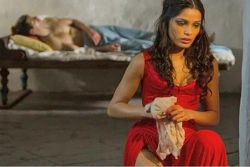 Theseus doesn't want to join any army that would have him as a member, to paraphrase a joke from Groucho Marx, and refuses to join his countrymen as a member of their armed forces. He is a peasant, and content to remain one, but then Hyperion and his men invade, and viciously slaughter Theseus' mother and the entire village, and the battle becomes a personal one. Captured as a prisoner of war, Theseus teams up with Stavros (Stephen Dorff), a shirtless thief who provides comic relief with anachronistic one-liners -- I was half-expecting Mel Brooks to emerge from behind a rock in a toga to feed him wisecracks -- and Phaedra (Freida Pinto), a beautiful Virgin Oracle who can foresee a future in which she (or a body double) strips naked and lies down under the heroic "we who are about to thrust salute you" Theseus.

Theseus ends up with the magical Bow, briefly, before Hyperion takes possession of it, leading to an epic battle in which millions of computer pixels died for the viewing pleasure of the masses.

As you would expect from the man who made The Cell and The Fall, Immortals begins and ends with epic imagery, and pretty much every scene in between is beautifully composed and photographed by Brendan Galvin, with intricately-rendered production design by Tom Foden, and gorgeous costumes and headpieces by Eiko Ishioka. Seriously, I thought I had seen about all the crazy hat pieces it's possible to see in one lifetime, but there's an incredible parade of eye-catching shapes perched and fitted onto heads.

There's no gravitas in the story or in the characters; all we know is that King Hyperion is wicked bad and Theseus has been 'chosen,' evidently because he can fight good, not because he's instrinsically a better human being or more humane or more whatever to distinguish him from any other human in his country. He's just been chosen by Zeus, and that's that. The other characters revolve around those two, and are reduced to the roles of associate heroes and assistant villains. The actors look great and emote in a convincing manner. Cavill makes for a dashing action star and Rourke is appropriately evil.

The action sequences, with Jean Frenette serving as fight coordinator and Artie Malesci as stunt coordinator, are not thrilling, but they're not meant to be. Instead, they serve as punctuation, like dance scenes in a musical, dishing up enthusiastic portions of blood and (some) guts. For all the severed heads, split-apart bodies, and spilled blood, the depiction of the extreme pain of violence is reserved for brief moments of poignant effect.

Immortals is not a great movie -- it's just a little above average -- but Tarsem keeps the proceedings motoring along very nicely, at a good pace so you can enjoy the drive and admire the scenery of a very pretty and energetic action picture.