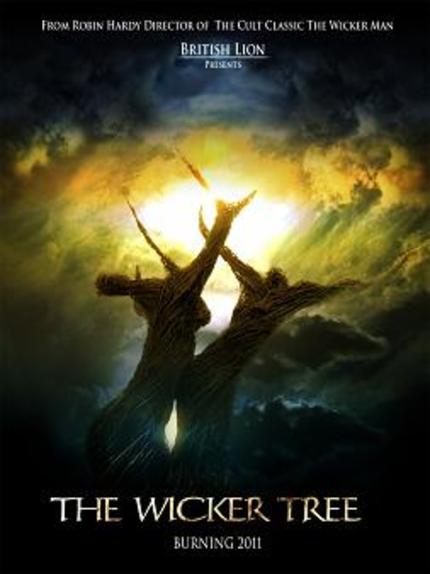 If you're going to mash up horror and comedy ideally your writer or director needs to have it straight what it is the audience are supposed to be laughing at. The idea of a quiet English village hiding a pathologically introverted cabal of murderers led by a megalomaniac is a strong, distinctive idea that's fundamentally comical. Same for a hapless nerd trying to juggle taking gory revenge on his old tormentors with raising his pre-teen daughter, or even an amateur sleuth investigating a murderous toy company intent on ruining Halloween [oh, I went there].

Okay, what about The Wicker Tree, then? There's nothing fundamentally wrong with a spiritual sequel to the 1970s cult classic The Wicker Man that plays the same premise for laughs, but Robin Hardy seems a little confused as to why he's doing this. The veteran director's on strong form technically, but the script never aims much higher than observing Scottish countryfolk sure are weird, Americans are funny, the music business runs on hypocrisy and other simple, crowd-pleasing platitudes. There's nothing wrong with any of this, but it makes it hard to care that much.

The plot sees evangelical Christian singer Beth (Brittania Nicol) and her boyfriend Steve (Henry Garrett) headed to Scotland, where they plan to use Beth's growing fame as a springboard from which to spread the Lord's word to the unbelievers. However, their hosts Sir Lachlan Morrison (Graham MacTavish) and his wife Delia plan to exploit the young couple's naivete. When they invite Beth and Steve to be the main attraction of their May festivities, it turns out there's a far darker motivation than simple altruism behind their request, against which brilliant smiles and handing out pamphlets door to door aren't much help.

For someone who's been more or less out of the game for over two decades, Hardy proves confident enough behind the cameras. DP Jan Hester gives the Scots countryside a dazzling gloss like something out of a holiday brochure that feels pretty apt, given Beth and Steve's wide-eyed enthusiasm, and though this is a fairly intimate film for the most part there are a few genuinely striking wide shots and sweeping panoramas that punctuate the narrative fairly well. The production design occasionally tends towards high-end television rather than anything truly cinematic, but The Wicker Tree never looks cheap or shallow.

The story, on the other hand, never really progresses beyond easy laughs, bar a couple of the climactic scenes. None of the cast let the side down - MacTavish in particular seems delighted with the arch, condescending dismissal he gets to salt every other line with, and familiar Brit character actors like Clive Russell treat both comedy and serious dramatics with the same game professionalism. It's just that there's nothing in the script that makes it feel as if any of their effort was worth it, and several moments none of them can lift beyond tired, thoughtless gags.

The story seems to be attempting to pay tribute to the original, where Edward Woodward's police sergeant was convinced he was the last bastion of moral probity among the heathen. But where the references to ancient fertility rites and sacrificial rites should conjure up some kind of wild, pagan fervour, what we get is more Carry On Morris-Dancing. The dirty jokes skewering the conflict between Beth and Steve's public image and their youthful passions are amusing, but little more - certainly nothing that could ever draw blood.

Really, for a film that's arguably about passion, none of the characters display much of it (no matter how often they take their clothes off). When Beth catches sight of a music video for a song she shot as a lurid, over-sexualised teen pop princess, it doesn't feel for a moment as if she's genuinely hurt to be reminded of it, or struggling with two different aspects of her personality - it just comes across as a throwaway gag that looks like a Britney Spears spoof from ten years ago or more. Nearly every plot point has the same cheerful, inconsequential verve that's more soap opera melodrama than actual gripping, emotive cinema.

The Wicker Tree briefly feels properly dangerous come the final act, but even that's fairly half-hearted. Twisting the lyrics of the devotionals Beth performs is one of the few genuinely dark, unsettling moments in a film that badly needed more of them, and Hardy does manage to convey a sense of horror in one character's realisation of how terrifyingly wrongly they've read events. But it's over in a flash, and the epilogue feels less like a sly double-back and more like a lazy downer of an ending simply because that's what audiences expect.

There's still plenty to like about Robin Hardy's comeback - beautifully shot light comic horror that's none too challenging, with attractive people getting naked, is probably going to pick it up a few fans. Hardy's return to the industry is worth celebrating, and you can only hope he tries another film, perhaps with someone else's script. But while The Wicker Tree gives every indication it wants to make an impression, throwing jokes around with abandon while it builds up to a climax, nothing sticks. Pretty, but ultimately vacant, The Wicker Tree only deserves a cautious recommendation.

(The Wicker Tree was screened as part of Manchester's horror film festival Grimm Up North 2011, which ran from 6th-9th October at the AMC cinema, Manchester, UK.)