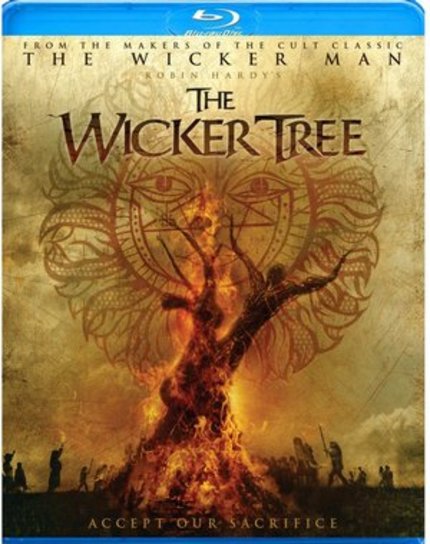 Eli, Eli, lama sabachthani
My God, My God, why have you forsaken me?

Robin Hardy's The Wicker Tree, ten years in the making, is a strange conundrum of a film. Hardy's The Wicker Man, from 1973, is the tale of an English policeman called to a small, secluded island just off the coast in search of a missing girl. Once there, he encounters a religious cult with nefarious and mysterious designs, though he's unable to piece them together until it is possibly too late. The Wicker Tree takes that story and transposes the action to a small Scottish town, and turns the policeman into a pair of Evangelical Christian missionaries, but that's about where the differences end, beyond that it is essentially paint by numbers, which is only one small piece of why the film is so utterly horrible.

In The Wicker Man, especially the longer director's cut, Sergeant Howie, is a devout Christian as well, but with foibles, and he is a man who seeks justice in a land that is as foreign to him as it can be. The great triumph of the first film is the steadily mounting tension, and Hardy's ability to play with the audiences expectations and have fun with the increasingly unsettling situation. We never know any more than Sergeant Howie does, even when Lord Summerisle (Christopher Lee) gives a detailed and factually correct explanation to the policeman, we are still in the dark about the gory details. That is why the film works so well.

One of the major issues with The Wicker Tree is Hardy's laziness in crafting a new story. If you've seen The Wicker Man, there is nothing to surprise you in The Wicker Tree. All of the beats are there; from the opening frames of the film, there is no suspense whatsoever. The names and places are changed, but beyond that it is painfully obvious. I dare say that even if you haven't seen the film, it is pretty obvious, save for a few of the more graphic details, where the film is going, and a film like this thrives on tension. When there is no tension, there is no reason to care, and the whole thing seems like a cheap imitation.

Would that this were the only problem, however, the troubles with The Wicker Tree are many. The first, and most obvious, fault is the absolutely excruciating script by Robin Hardy. The film feels as though it was written by a high school drama coach. Characters are no more than cardboard cutouts and poorly realized stereotypes. The missionaries purport to be from Dallas, however, I live in Dallas, and these are not locals. The broad southern dialect in which Hardy has written these characters leads me to believe that he's never actually spoken with a southerner. Don't get me wrong, I'm no lover of the southern twang, but this is just ridiculous. At one point, in what is probably the nadir of the script's incompetence, Cowboy Steve actually uses the phrase "How comes that?" as a dixie-fied transmogrification of "Why?" Brutal.

Beyond the painfully wretched script and been-there-done-that plotting, the film's woes continue. The acting, with the possible exception of Graham McTavish as the town's elder Sir Lachlan, is abominable. Rarely a moment passed where I didn't want to physically assault a character on screen for their miserable performance. The film's music, which was intended to be integral to the story, is awful, in particular as pop-country tune, used to show what a slut missionary Beth Boothby used to be before finding the Lord, is absolutely amateurish in every way, and don't get me started on the music video they shot for the thing. It takes real ineptitude to fuck up a line dance. I could go on, and on, but instead, I will restate the question with which I opened this review. After two horrifically, soul-crushingly bad films in one week...

My God, My God, why have you forsaken me?

The Wicker Tree is probably the most finely polished turd I've seen on Blu-ray. Looks great, sounds just fine, except for all of the acting and singing and story. Blah, who gives a shit?

There are a few extras, which are always interesting to check out on bad films to see just what everyone was thinking. The Making of The Wicker Tree is interesting in its egotism. Robin Hardy wonders why no one has ever attempted to recreate a film like The Wicker Man in the years since its original release. I guess we can now see why between the 2006 Neil LaBute disaster and this bucket of bile. Everyone in the film seems to believe that they are making a masterpiece, rather than a schlocky, poorly conceived, and lazy rehash of Hardy's better days. The actors don't seem to be aware that they are awful, how can someone be so in denial? In case there as any doubt as to whether the film was really bad or just badly edited, the deleted scenes remove that shroud by revealing that somehow the stuff that was cut out of the film is worse than the stuff that was left in, which is impressive in a way.

At least with LaBute's film, we managed to get a wonderful show reel of Nic Cage going apeshit, with this one, we just get the shit. Avoid.

Order The Wicker Tree on Blu-ray at Amazon