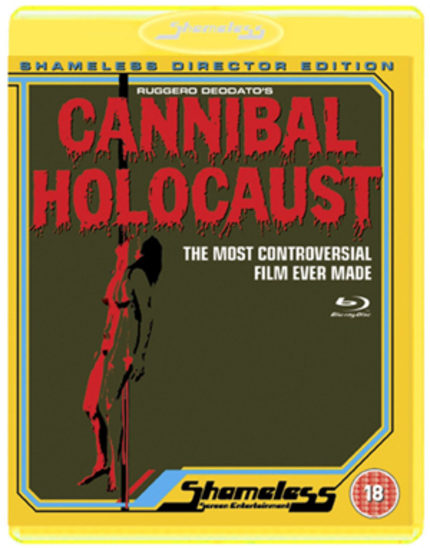 Ruggero Deodato's Cannibal Holocaust is among the most polarizing films in cinema history. The brutal display of savagery among the fame hungry camera crew and the real life violence against animals on screen turn many hardened gore fans against this, Deodato's more notorious work. I'm a pretty hearty guy, but I must admit that watching some of the nastier bits of Cannibal Holocaust still turns my stomach. However, wherever you fall in this argument, it is hard not to recognize the impact that Cannibal Holocaust had on the early '80s wave of gore films. The UK's Shameless Screen Entertainment have released Cannibal Holocaust on Blu-ray for the first time anywhere (though it has since come out in France), and have done their best to make this an edition worth paying attention to.  This release has a very issues, which we'll address later, but there are some very solid positives as well, and overall, I give this one a cautious thumbs up.

Anthropologist Harold Munroe is hellbound as he travels into the green inferno of South America's rainforest in an attempt to find a documentary crew lost months before. Instead of survivors he discovers a world of cannibalistic excess beyond his wildest imaginings but when he returns home and screens the footage left behind by the eviscerated filmmakers, chaos erupts as the screen is filled with some of most disturbing images ever committed to celluloid.

The ultimate video nasty is now presented as never experienced before - remastered in HD from original sources - and with the 1st ever Director's New Edit, it is still THE most controversial film ever made.

In case you haven't seen Cannibal Holocaust, it is among the first of the "found footage" films.  A team of 20-something documentarians goes into the Amazonian jungle to find some mythical cannibal tribes.  They never come back, but anthropologist Harold Munroe goes in after them and finds their footage, revealing some heinous behavior exploiting and even killing the indigenous people, all in search of sensational footage.

The film is actually a pretty smart one. Deodato made the film as a remark against what he saw as mercenary journalism, in which reporters who couldn't find stories would simply make them up. This idea is nothing new, in fact, Billy Wilder's Ace in the Hole starring Kirk Douglas is a particularly famous example of this theme. The problem with the film is that, though it aims to be taken seriously, that is made extremely difficult by some obvious exploitation of the subject matter and the local actors.

This isn't the first or the last time that scenes of extreme sexual violence or real life violence against animals has clouded a film's chance at being taken seriously. Very recently, A Serbian Film faced the same problem. A Serbian Film presses many buttons, all ostensibly to draw a parallel between the extreme sexual violence on screen and the plight of the Serbian people during that country's extremely violent real history. As a result, many people saw the film as pure exploitation and the message was lost. I'm not saying whether their point is valid or not, but the idea that the on screen actions blur the purpose of the film is certainly a valid concern. Cannibal Holocaust faces much the same problem, except that while ASF was presented most of the time with it's context not to far from sight, thanks to interviews and contemporary reviews popping up online almost instantly. Deodato's film was presented wholly without context, being marketed squarely at exploitation film fans and gorehounds.

As a result of the film's repulsive on screen action, Cannibal Holocaust remains a very controversial piece. I cannot defend some of the things that happen in this film, and as I understand it, Deodato isn't proud of some of the animal cruelty he filmed, either, however, the buck stops with the director, and if it's on screen, he can ultimately be held responsible because he was there when it was filmed. I don't enjoy Cannibal Holocaust, but I also don't condemn it or find it particularly offensive, at least not as much as the BBFC, who initially banned it as one of the original Video Nasties. I do, however, find merit in the film. It is, for all its offenses, it is a spectacularly well put together film.  The film is shot beautifully, and the message, such as it is, is topical even today. This is definitely among the better acted films in the Italian late '70s-early '80s horror boom, probably because several of its performers were native English speakers, which is not a luxury usually afforded Italian genre films.

While Cannibal Holocaust can be seen as an indictment of the journalism trade against humanity, it can also be read as a strike against humanity's impact on the environment. The white people in the film, in fact all non-indigenous peoples in the film, are all complete assholes. The documentarians are just the most obvious and nastiest offenders. Dr Munroe and his recovery team are not much better, they are perhaps less violent, but still leave more than footprints and take more than pictures, if you know what I mean. If the indigenous people in the film don't always live in peace, there is some mention of two enemy cannibal tribes, they do at least live in harmony, harmony with their jungle, which they value above all else. Yes, I just called Cannibal Holocaust the product of tree-huggers, I'm just as shocked as you are.

I hesitate to call Cannibal Holocaust an important film, but it is certainly a film that deserves to be watched at least once. For those who are weak of stomach or for whom animal violence is simply intolerable, you can skip this edition, but the US versions allow you to choose a completely cruelty-free version of the film so sate your curiosity. Be aware that the animal violence is not the only part of questionable quality, there is significant sexual violence as well, and it is graphic. It is what it is, and it deserves to exist, and I'm okay owning it, twice even.

To address the first question on anyone's mind about this film:

Shameless Screen Entertainment's Blu-ray of Cannibal Holocaust is missing 15 seconds of footage that was required to be cut by the BBFC depicting animal cruelty.

This makes it the longest version of the film ever legally available in the UK. Still, the film is censored, and I know that this is a sore spot among many of our readers. I'm not a fan of censorship, however, in this case, the animal cruelty really bothers me, so I'm not opposed to owning a version of the film with less of it. There is still animal violence in the film, the pig still dies, and the almost unbearably gruesome sequence with the turtle is intact. So bear that in mind.

Okay, on to the quality of the disc itself. The image is a mixed bag, the HD transfer of Cannibal Holocaust is not great, the image doesn't show any natural film grain and looks strangely overprocessed, perhaps DNRd at many points. Even in closeups, there is very little fine detail. This is really troubling, though given the state of most Italian genre films on Blu-ray, not surprising. It would appear that the labs in Italy haven't quite learned to transfer these films in a way that preserves fine detail and grain structure in a satisfactory way. On the plus side, the film does look better than in any other home video presentation I've seen, including my Grindhouse DVD, and the colors are astoundingly beautiful. You've never seen this film like this, the new color scheme gave me a whole new appreciate for the beauty of Cannibal Holocaust.  The audio is very good, also. The dialogue, though recorded initially live in English on set, is looped as was customary for all Italian films well into the '80s.  The real audio gem of this film is Riz Ortolani's score, which certainly transcends the film's gritty appearance to remain one of the great film scores of all time.

In terms of extras, Shameless have done a very fine job assembling some quality stuff. First there is a 30 minute shared interview with Ruggero Deodato and Gabriel Yorke, who share a number of interesting anecdotes, and allows Deodato to both defend his work and apologize for some of the nastier animal footage. The other major extras is The Long Road Back From Hell, a 40 minute featurette with interviews from most of the surviving cast and Deodato, which does a fantastic job of getting different points of view of the production. Not only are those involved in the film interviewed, but Shameless have also gotten a number of well respected British film critics to chime in on the film, and not always in the most glowing of terms (I'm looking at you, Kim Newman...). This feature's great asset is its objectivity in that it doesn't lean too heavily on the pro- or anti- side. The film is what it is, as I mentioned above, and deserves to be judged on its own merits.  The disc rounds out with a selection of trailers for other Shameless DVDs, which are great on their own!

I cannot give such an excited thumbs up to this release as I'd like to.  The image quality issue is my most pressing concern.  However, it is the best we have right now. The image is better than the DVD and the extras are really very good, so I'm happy enough with it. I've given you enough information to make your own decision about this release, go forth and shop.

I'm not a fan of this one, saw it 3 years ago. It was a VHS copy a friend of mine had stashed away. I've sat through some of the goriest 70's horror out there and this one made me queasy in a few areas. I have no plans on buying this one, but i will rent it for a another look and some of the extras.