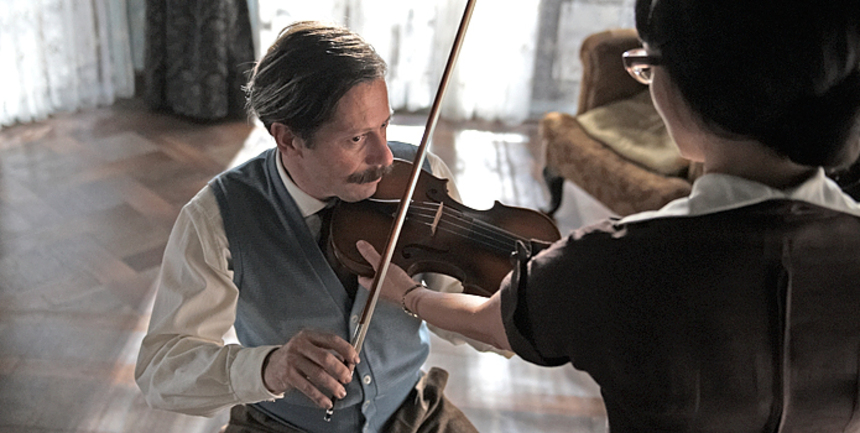 Marjane Satrapi and Vincent Paronnaud's adaptation of Satrapi's graphic novel Chicken with Plums is a delicious fantasy, one that will leave your heart warm and likely more than a little sad. Presented with a combination of live action and animation, it tells the story of Nasser Ali (Mathieu Amalric), a violinist who has decided to commit suicide after his wife destroys his beloved violin, which he associates with the loss of his true love, a beautiful woman named Iran.

The film follows the last few days of his life as he recalls his life story, and why that violin is the only one on which he could ever play. Each day leading up to his death brings a different set of characters to his bedside, each trying to convince him to find the will to live. The settings and costumes give a slight exaggeration to normalcy to emphasize the fairy tale nature of the story. They walk a fine line of exageration that takes the audience into this fantasy world while not abandoning the characters to ridicule. A scene with Isabella Rossellini as Nasser's mother has her ordering her son to marry while chopping an extremely large watermelon is side-splittingly funny and terribly heartbreaking.

The visual flair works with the narration to promote the feeling of a live-action graphic novel, with each chapter as a new page that the eye must traverse. It seems to be a particularly French form of contemporary storytelling (although Satrapi is Iranian, she has been living in France now for many years). The French seem particularly adept at visualizing fairy tales. The story is not a realistic portrayal of Nassar's past, but his imaginings of it; hence the painted backdrops, the longing looks and sighs, the rather dramatic reasons for Nassar's decline.

Of course the film is set in the 1950s in the Middle East. As Satrapi showed with her autobiographical book & film Persepolis, we might have a very narrow view of Iran today, but it has a rich and varied history, and it was not always a repressive country. The fact that the beautiful loved is named after the country cannot be a coincidence, and that she ages rather rapidly through the loss of Nassar is most certainly a metaphor for the country. But that is as political as the film becomes.

Chicken with Plums does not shy away from heavy emotion, but gives it the visual twist it needs to carry its audience just a little lightly. And it moves between visual styles, tailoring itself to each section of the story. Satrapi's work lends itself extremely well to film.

Do you feel this content is inappropriate or infringes upon your rights? Click here to report it, or see our DMCA policy.
Vincent ParonnaudMarjane SatrapiMathieu AmalricEdouard BaerMaria de MedeirosGolshifteh FarahaniComedyDrama

More about Chicken With Plums