Watch The Trailer For PERSEPOLIS Directors' CHICKEN WITH PLUMS! 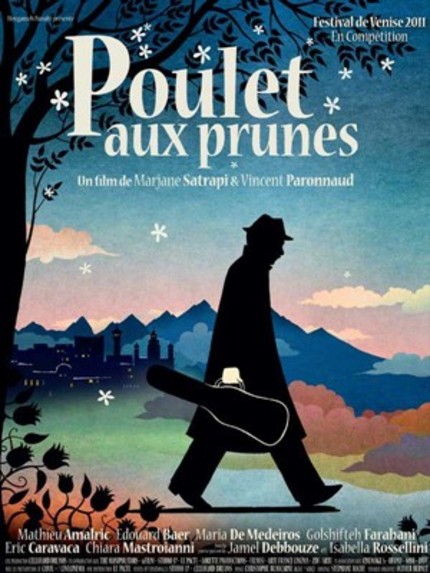 When Marjane Satrapi and Vincent Paronnaud stepped on to the international film scene with their debut feature, Persepolis, they did it in style. An animated feature based on Satrapi's autobiographical graphic novels, Persepolis went on to be one of the most acclaimed and awarded films of 2007. It won the Jury Prize in Cannes and a pair of Cesars in France before going on to be nominated at both the Golden Globes and The Oscars. It was only their first feature but already the duo were among the most acclaimed filmmakers in the world. So, of course, they've decided to change it up for their second effort. A lot.

The pair's second effort is titled Chicken With Plums and this time out they've moved away from animation and in to live action. When animators move to live action the results are frequently fascinating and that certainly appears to be the case here.

The year is 1958, the city Tehran. Celebrated violinist Nasser Ali Khan (Mathieu Amalric) has an unexpected encounter with a longlost love, but she fails to recognize him. He returns home, has an argument with his wife and, most troublingly, discovers that his prized violin has been broken. He's unable to replace it, can't conceive of life without the consolation of music, and soon finds that he can't get out of bed, where he lies locked both in dreams about his childhood and projections of his own children's futures. His reveries lay somewhere between fantasy and oblivion, and quickly assemble into a kind of thriller, riddled with flashbacks and flash-forwards (as well as a vision of a naked Sophia Loren), that illuminates his peculiar persona and the source of his despair.

Again based on a graphic novel by Satrapi, Chicken With Plums begins its festival run in Venice and Toronto - where the synopsis above was lifted from - with high expectations. The trailer - which you can find below - meets them.

Do you feel this content is inappropriate or infringes upon your rights? Click here to report it, or see our DMCA policy.
Vincent ParonnaudMarjane SatrapiMathieu AmalricEdouard BaerMaria de MedeirosGolshifteh FarahaniComedyDrama

More about Chicken With Plums