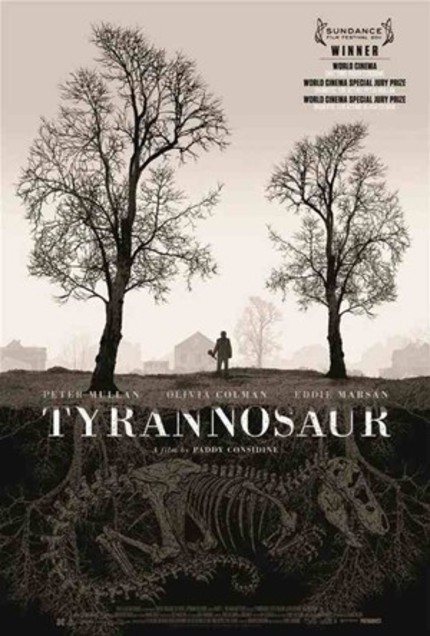 [With Paddy Considine's Tyrannosaur about to arrive in Toronto we revisit our earlier review.]

An animal can only absorb so much punishment before it snaps back: the paraphrased narration an assessment of Tyrannosaur's brutality driven study. The feature debut of Paddy Considine, and extension of his 2007 short, Dog Altogether. A portrait of self-destructive reconciliation, achingly portrayed by the ever-talented Peter Mullan.

Resentful, battery-prone and bolstered by alcohol the film begins with the sound of contact; bat against forehead, shoe against unsuspecting ribcage. The repetitious auditory thumps, crashing in the whimper of felled kin; the murder of a dog speaking for state of mind. Joseph, a righteously unstable council estates tenant, downing his companion with an acerbic, instantly regretted kick. The felled pet, a catalyst and bookend.

Morality is not lost on the angry, remorse has its moments the morning after and life must go on. The abusive, lashing pattern of harm a familiarity. The fragmented instability subjecting the accidental, the raucous and the uncomfortably similar. The throbbing repercussion continued in the abolishment of past resentment, a sledgehammer hitting metal; the dismantled shelter of the past.

Seeking, but unwilling to admit, Joseph finds shelter in the prayerful surrounding of a charity shop, and its patron, Hannah; the disarmingly magnificent Olivia Colman. Proximity, bitterly reminiscent of previous relationships; the repeating encounter provides spiritual proclamations and hostile confusion as the pair divulge and stow information.

Hannah, an advertising Christian, crutches to faith, under the continual abuse of her actionably vulgar husband. The capricious higher power often bending to the immediate whims of alcohol's numbing forgetfulness. Alone in confidence, Christ's salvation only carries so far in the absence of community, the doctrine alone failing to bolster the manifest being.

A somber discourse of improprieties and the need to steady, Consinde handles the dense, grieved subject matter with a callous aplomb. As the Tyrannosaur's impotent arms are unwilling tools of control, so goes this film's Tyrannosaur the struggling, human soul.