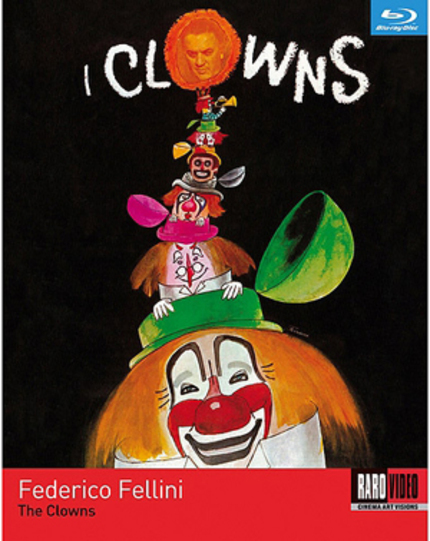 RaroVideo USA is jumping into the HD home video market with The Clowns on Blu-ray this October 17th.  I previously reviewed the DVD edition of The Clowns, and the video quality was the least of it's attributes, though it was decent enough.  I'm curious to see what has been done in the mastering for this new Blu-ray edition.  The extras remain the same as the previous release, and I will be comparing the A/V with the DVD when I get it for review.  Also on the way this December is a Blu-ray edition of their Fernando DiLeo crime collection, which is actually a bit more exciting.  RaroVideo is batting 1.000 so far with the quality of their selections, and going Blu only makes me more excited.  Hopefully, they'll be able to manage day/date Blu/DVD releases soon, so people don't have to double dip too much.

Here are the details on The Clowns Blu-ray:

RaroVideo Launching First-Ever U.S. Blu-Ray Release with One of Federico Fellini's Final Masterpieces Dedicated to his Lifelong Fascination with The Circus - The Clowns

"The Clowns is an affectionate memoir, a lyrical documentary in which Fellini himself, often on-screen as movie ringmaster eulogizes his lost fantasy world."
-Vincent Canby, The New York Times

LOS ANGELES (September 21, 2011) - Hailed by cinephiles for expertly restoring rare films by influential filmmakers and publishing them with compelling extras, Italian DVD label RaroVideo announces the company's first-ever U.S. BLU-RAY release will be Federico Fellini's THE CLOWNS. RaroVideo US's restored version of Fellini's THE CLOWNS, one of the director's final masterpieces, will arrive on BLU-RAY for the first time ever in the U.S. on October 17, 2011. The DVD extras contain a rare and exclusive short film by Fellini, a video essay on the genesis of the film and a 50 page booklet with exclusive Fellini drawings. Hard-to-find, this 1970 film melds memoir and documentary into a circus of fiction and reality where Fellini delights in the role of ringmaster. The carnival-sounding score composed by Nino Rota, and an appearance by Anita Ekberg (star of Fellini's 1960's masterpiece La Dolce Vita), enhances the Fellini-esque experience.

Antonioni's The Vanquished, Adua and Her Friends, The Perfume of the Lady in Black, The Secret of Dorian Gray, The Anger, Live Like A Cop Die Like A Man, To Be Twenty and The Fernando Di Leo Crime Collection are all available now on DVD from RaroVideo U.S.

ABOUT RAROVIDEO U.S.
RaroVideo U.S. is devoted to producing high-quality DVD, BLU-RAY and VOD releases for American audiences. The partnership behind the company formed in 2010 when Stefano and Gianluca Curti, owners of RaroVideo Italy, teamed with Nico Bruinsma, owner of U.S. DVD label Cult Epics. Stefano and Gianluca Curti started RaroVideo Italy in 1999. Hailed by cinephiles for expertly restoring rare films by influential filmmakers from a wide range of genres, the company has earned an outstanding international reputation for the quality of its high-definition transfers. Its releases are also known for their original uncut versions and exclusive supplemental content as well as the critical analysis and superb booklets that accompany each film. Among the directors featured in the RaroVideo catalog are: Federico Fellini, Michelangelo Antonioni, Pier Paolo Pasolini, Luchino Visconti, Roberto Rosselllini, David Lynch, Derek Jarman, Shinya Tsukamoto, Rainer Werner Fassbinder, Jean-Luc Godard, Werner Herzog, Lars von Trier, Lucio Fiulci, Mario Bava, Francesco Barilli, Tinto Brass, Jean Cocteau, Pedro Almodovar and Martin Scorsese to name just a few. RaroVideo was also the first company in the world to release on DVD Andy Warhol's: The Chelsea Girls, My Hustler, The Nude Restaurant and Lonesome Cowboys. RaroVideo's U.S. branch is based in Minneapolis, Minnesota.

THE CLOWNS - SYNOPSIS
Fellini's fascination with the circus and the surreal come to a head in one of his final masterpieces, THE CLOWNS. The film reflects Fellini's childhood obsession with clowns and begins with a young boy watching a circus set up from his bedroom window. Though comicaland referred to as a "docu-comedy", this film explores deeper human conditions such as authority, poverty, humility and arrogance all of which manifest themselves through the characters of the clowns who vary from the local sex-crazed hobo, a midget nun, to a mutilated Mussolini disciple. THE CLOWNS features Anita Ekberg, the star of his 1960's masterpiece, La Dolce Vita and the director himself.

Pre-order The Clowns on Blu-ray at Amazon.