DVD Review: I Clowns (The Clowns) 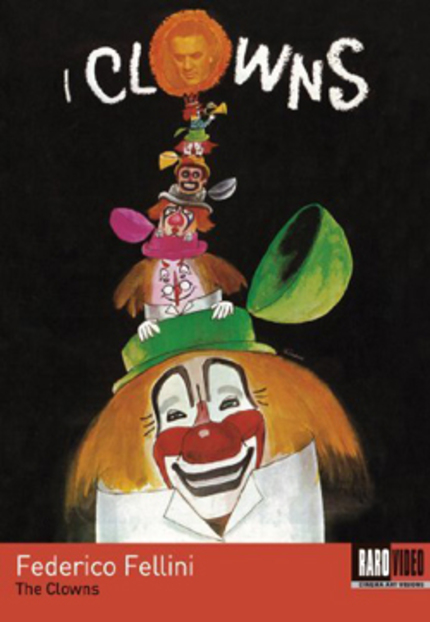 I will confess upfront that this is my first complete viewing of a Fellini film.  I've seen bits and pieces of at least half a dozen, and I've seen Fellini's segment from Spirits of the Dead, but not full features.  I think that may put me at a bit of a disadvantage with The Clowns, but I think I've done enough reading up to overcomes this deficit.  It is a strange film in his oeuvre, and therefore a fresh eye may actually be an advantage in gauging its effectiveness.  Then again, maybe I'm just telling myself that be comforted.  Anyway, onward and upward with Fellini's I Clowns (The Clowns).

The Clowns is part drama, part fantasy, part pseudo-documentary, and all about the mind of Federico Fellini.  Even only having gathered bits along the way, I am aware of Fellini's penchant for clowns, circuses, grotesqueries, and the absurd.  The Clowns is his way of exploring this one corner of his mind and why clowns and the circus had such a great hold on people in the 20th century.  This is a phenomenon which saw its greatest heights in the 20th century, after all, the art of clowning is less admired now than it once was.

As much as The Clowns is a film about clowns, it is about Fellini.  His obsession with clowns goes back to his childhood, and we see this reflected in the first scene of the film, in which a young boy awakens in the middle of the night to find a circus tent being erected at his front door.  When the boy first enters the big top, he is confronted by the maddeningly frantic actions of the clowns, their faces painted white and brown, and he is not gladdened, but frightened, at their appearance.  As the film progresses, it switches back and forth between the story, told in clown acts, of this circus, and the story of a documentary being made by Fellini about clowns, which is all staged.

The documentary within the story shows Fellini and a skeleton crew visiting various major circuses of Europe as well as various retired clowns and their kin to find out what made them who they were.  This portion of the film is rather propulsive, and despite its obviously scripted nature, many parts of it feel very natural.  The impromptu performance of an old clown on his guitar is very charming and leaves both the participants in the film, and we, as viewers, endeared to this man who seemingly hasn't lost his touch.  One can tell that this is a passion project for Fellini, his heart is in it, and it feels very personal.

The clowning portions of the film, strangely, are some of the tougher parts to get through.  There is very little narrative push through the film, however, we do make some minor emotional connections with the clowns.  Without dialogue, the film does not flow as nicely as it should.  Fellini appears to be attempting to recreate the feeling of being in the circus tent with the action, but it just doesn't translate very well, and several of these sequences feel a bit indulgent.  The shot-to-shot editing is very fast paced, but the scenes go on for a (necessarily) long time in order to watch the acts build and climax.  The only one with which I was truly enamored was the final act, which was longer than all of the others, but full of kinetic energy and madness in a way that the other acts weren't.  The final twenty minutes of the film are truly engaging and exciting.

On the whole, the film is a tough one to parse.  The documentary segments are very interesting, but more inviting if one has a rudimentary understanding of clowns and clowning history; while the fantasy segments suffer from their own indulgence.  The combination of the two makes this a very interesting film, but not necessarily a terribly entertaining one the first time around.  I actually went back and watched most of it a second time after sifting through the excellent extras and found it much more engaging.  If you want to see The Clowns, Raro Video's disc is the way to go.

Raro Video's presentation of The Clowns is truly one to see.  The video is bright and relatively sharp.  The image is stable throughout.  This won't be mistaken for one of those super expensive restorations any time soon, but I can't imagine it having looked this good on home video before.  The Clowns was produced and shot for television, which leaves Fellini at a certain disadvantage regarding the time he was able to put into the film, but I think it feels more spontaneous and the documentary segments reflect that.  The audio is presented in its original mono and sounds pretty decent.  The Clowns was not shot with sync sound, and that is apparent, but again, it seems pretty accurate to the director's intention.

This package really excels in the extras department.  First up is Adriano Apra's fantastic visual essay Fellini's Circus.  Watching this essay made all the difference when I went back and watched the film a second time.  Apra explains some very basic concepts that Fellini assumes the viewer understands and these explanations helped greatly in my appreciation for what was being done with the film.  He also explains some of the genesis of The Clowns, Fellini's inspirations, and goes through many of Fellini's own thoughts on clowns, clowning, the circus, and other matters as they relate to this film.  I know many people think of extras as just that, extra, but this is one case in which the bonus material is every bit as good as the feature.

Along those lines, Raro has included a beautiful fifty page booklet packed to the gills with information.  Included are pieces of Fellini's original script, some of his own drawings for the film, excerpts from his book, The Clowns, released as a companion to the film, and other really fun tidbits.  The packaging is nothing to sneeze at, either, with a single disc digipak inside of a slipcase with the booklet, it looks and feels like care was taken to prepare this release.  The outer case looks very distinctive as well.  A good job all around.  Rounding out Raro's US debut is a Fellini short called Un Agenzia Matrimonial, shot in black and white in 1953.  An interesting short, but nothing spectacular.

I'm not sure The Clowns was the first Fellini film I should have watched, but thanks to Raro's presentation of the film and the essential supplementary package, I feel better off for it.  Definitely recommended for those who don't mind spending a little bit of energy and brainpower in pursuit of entertainment.

Buy Raro Video's I Clowns (The Clowns) at Amazon.