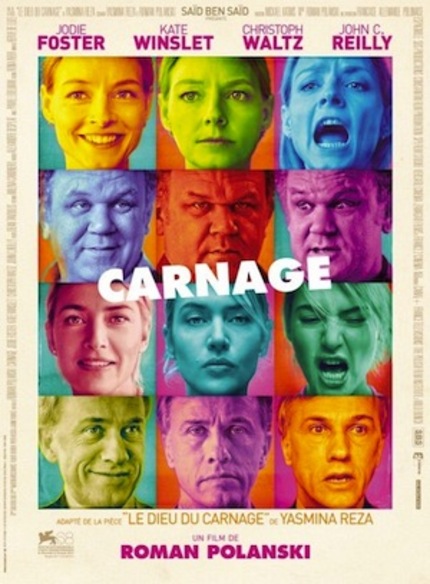 I don't think I'm going out on a limb to say that Roman Polanski's Carnage, which opens in the U.S. on December 16, is in many ways a quintessential New York Film Festival title. Like The Social Network last year, it manages to do three things well--no, make that very well:  a) capture a piece of the zeitgeist in a way that practically throbs b) feature an uncommonly high degree of wit (New Yorkers are sometimes too verbal for their own good, as the film itself makes clear), and c) do all of this while flashing the signature gifts of a world-class "name" director.


If you're unfamiliar with its premise, Carnage is based upon Yasmina Reza's acclaimed play God of Carnage, which here has been adapted by Reza and Polanski in a way that bottles the lightning of an engaging live performance yet defies staginess at every turn. Two couples meet, initially in a spirit of civilized reconciliation, after their kids have had a violent encounter in a local park. But of course one thing leads to another, the one thing being pomposity or barely concealed class conflict, and another being open contempt and, worst of all, bad manners. I say "worst of all" because Carnage is first and foremost a comedy of manners in which the zingers aren't just clever in the manner of a sitcom but rather deeply satirical of bourgeois values--you're laughing half the time because of how something is said, not just because of what is said, and you're laughing nearly all the time because what's being revealed skewers the hypocritical or self-serving attitudes of people you know. If you're lucky, one of these people is you.


One could reasonably argue that Carnage raises a lot of issues without exploring any of them at great depth, but that's why it's a comedy. The experience is not supposed to be Who's Afraid of Virginia Woolf?, and in fact the moment it starts to veer in that direction, the characters themselves cut things short, exhibiting a low tolerance for "drama queen" histrionics. Clocking in at a mere 80 minutes, the running time of a brisk b-movie, Carnage efficiently harpoons liberalism and conservatism, and then looks around for other targets, such as marriage. And while the film certainly boasts a quartet of high-powered headliners, I wasn't sure about the fit in terms of the comedic material. Obviously John C. Reilly is more than qualified in the yuks department, but I was afraid he'd play things too broadly or, at the very least, too obviously. But no need for concern there--he's terrific, as is Christoph Waltz, who's often hilarious when at his most understated. The women probably have fewer laugh lines, but Kate Winslet is as solid as ever, and Jodie Foster in particular deserves some love from a moviegoer's perspective. After the awful all-around outing represented by The Beaver, she is more than redeemed here; yes, a few times she pushes it, teetering on a tipping point that threatens to send her crashing over the top, but you don't really want to rein her in (and evidently Polanski didn't either) since it's her energy that often seems to fuel everything else. Thirty-five years after her performance in Taxi Driver, one hopes this role doesn't simply bring her another Oscar nom, but a new stage in her career, one in which she takes on challenging and entertaining roles like this--that is, ones that could help earn her a Bette Davis-like stature in filmdom.  For my money she's the closest we've got these days.


For his part, Polanski does a wonderful job of highlighting these performances without underscoring them through annoying close-ups or other look-at-me devices. The unity of time and place is similarly handled with a sharpness and an ingenuity that recalls the director's first-ever feature, Knife in Water (1962). As in many types of thrillers you wonder why the characters simply don't "leave" the setting in which they find so much peril, but here it's pretty clear that on a subconscious level they just can't: there'd be no emotional closure if they did. Likewise, we're complicit in our own entrapment in the Brooklyn apartment in which the action takes place, not wanting to depart until we hit some foundational truths. The nice thing is that we're made to feel at home while visiting. Again, credit Polanski, who's always been skillful at using décor--from Rosemary's Baby right up through The Ghost Writer--and here his teaming up with Oscar-winning production designer Dean Tavloularis (Bonnie and Clyde, The Godfather, Apocalypse Now, etc.) creates some memorable, if subtle, results. Characters, emotions, and moods are framed by their relationships, aesthetically and compositionally, to the furnishings, the artwork, and the architectural detail. If you're not aware of all this, that's a testament to the film's effectiveness in this respect--you're focusing on the dramatic moment at hand, not how it's enhanced by various background colors and geometric patterns.
Hey, but if all this sounds a bit too cerebral, you should know that Carnage also sports the best scene of projectile vomiting you're likely to see this year. It's an example of bodily fluid-based humor that's far funnier--and far more transgressive, because you aren't expecting it--than anything in Human Centipede II: Full Sequence.