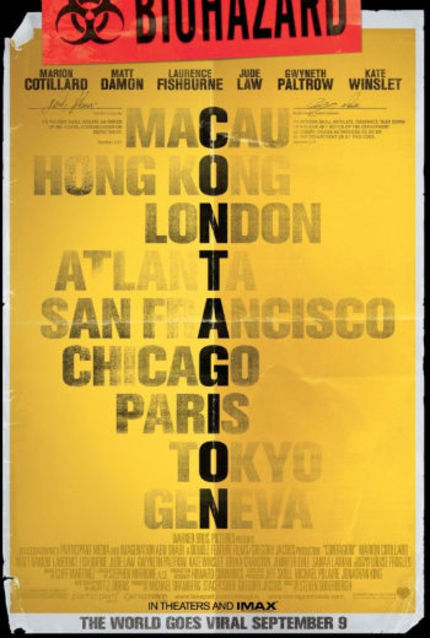 Steven Soderbergh's Contagion considers what might happen if a highly-contagious deadly virus began to spread in today's ultra-connected modern world. It taps into a primal fear: the unstoppable disease that can infect and kill millions, without anyone being able to stop it. The Black Death claimed the lives of tens of millions in the Middle Ages, while the Spanish Influenza in 1918-19 infected the world, killing more than 50 million people, and perhaps as many as 100 million. Smallpox may be responsible for 300-500 million deaths. In more recent years, the threats of AIDS and SARS have placed everyone on guard.

Contagion is an above-average thriller. It does for germs what Jaws did for water: make you afraid of something you never realized could contain such horror. Borrowing liberally from the 70s disaster movie template perfected by producer Irwin Allen (The Poseidon Adventure, The Towering Inferno). Contagion scatters an all-star cast across the globe as they battle and/or succumb to a mysterious new illness. The film adds some new ingredients to the mix, which makes it feel fresh and relevant.

We'll have at least one, and possibly two or more reviews of Contagion up tomorrow, but putting aside the merits of the film, it's fascinating to wonder why Warner Bros. decided to release it on Friday, September 9, two days before the U.S. commemorates a tragedy that claimed the lives of thousands of people.

Contagion deals with a very serious subject, one that deserves serious consideration. This weekend, millions of people will be stopping to reflect on what happened on 9/11, and to consider to what degree it has changed the way we live our lives. So perhaps this weekend is, absolutely, the best possible time to meditate upon the horrors that can be visited upon human beings.

In the past, many movies have dealt with the subject, almost always in a serious vein. The possible death of millions is rarely a laughing matter, after all. Forty years ago, Robert Wise's The Andromeda Strain took a clinical approach. Based on Michael Crichton's novel, the premise is that a military satellite has crash-landed in a small town, its cargo from outer space (a disease-carrying organism of unknown origin) killing everyone, save for two survivors. Four scientists race against the clock, fearing that the mysterious cargo might spread and kill everyone on Earth. The scientists have reason for suspicion about the role of the military -- and, by extension, the government -- in what has transpired, but must press onward despite their personal reservations.

In The Omega Man, released a few months later, the responsibility for worldwide devastation is laid squarely at the feet of the governments of Russia and China, who engaged in germ warfare that wiped out most of the Earth's population. Scientist Charlton Heston is the rare survivor who was unaffected, because he inoculated himself with an anti-virus that he helped develop. Every other survivor has been mutated by the virus, unable to tolerate the light, and slowly losing their minds.

The Andromeda Strain and The Omega Man shared an intense distrust of government, and that's a concern that's alive and well in Contagion, though sidelined to the perspective of the 'lunatic fringe' of blogging and online media. In the post 9/11 era, many have wearily allowed that 'the government is doing the best they can, and we should support them,' a far cry from the perceived activist majority that informed a number of films of the early 70s.

More than 10 years later, The Plague Dogs (1982) confronted the issue of experimental testing on animals head on. In this devastating animated flick, based on a Richard Adams novel, two dogs escape from a laboratory, where they have been doomed to a painful life followed by an untimely death, all in the name of medical testing to benefit humans. But the humans running the lab are much more concerned with experiments that further their own evil ends, including the possibility of unleashing a deadly plague. We're drawn into the plight of the animals to a degree that exceeds that of nearly any other innocent, unwilling victim depicted in the history of cinema.

Well into the AIDS era, Outbreak (1995) presented plague fighters as a new breed of action heroes, improbably making Dustin Hoffman the last hope for mankind. Hoffman certainly injects a great deal of humanity into his role, as a military scientist who tries to contain a plague by any means necessary, even when it means going up against a superior (Donald Sutherland) who would prefer to wipe small towns off the map just to be safe (and protect his own secrets). The film ups the action to hysterical levels; the possibility of worldwide catastrophe seems minor compared to the tremendous interpersonal conflicts that must be resolved. We almost forget that the virus kills within 24 hours by liquefying the victim's internal organs.

While the plague got demoted eventually to a second-class threat in Outbreak, Terry Gilliam's Twelve Monkeys, released at the tail end of the same year, absorbs into its cinematic DNA the idea of a plague that killed off most of mankind. Decades later, the survivors are living underground, and one of them (Bruce Willis) is enlisted to go back in time to figure out how to make the world safe for living above ground again. Both the past and the future look bleak, allowing no room for escaping Hell on Earth. Twelve Monkeys wrestles with issues of experiments gone wrong, man gone insane, and the consequences of medical testing. It's a long, unsettling, disturbing nightmare that never ends.

More recent plague pictures have also focused on the horrors of life after disaster strikes, transforming masses of people into zombies, as in Resident Evil (2002), 28 Days Later (2003), and Dawn of the Dead (2004). Francis Lawrence's I Am Legend (2007) is the third big-screen adaptation of Richard Matheson's 1954 novel (The Last Man on Earth being the first, and The Omega Man the second). More than the first two versions, I Am Legend depicts scientist Robert Neville as he desperately tries to find a cure, ignoring the agonizing pain he causes to hapless test subjects, and completely blind to the extent of his own culpability. Rather than blaming the government, it places the blame on science itself, on the ceaseless quest that can sometimes have unintended, and devastating, consequences.

Like Contagion, all these films are sober and cautionary, yet remain riveting as they tell dramatic stories of legend, science, and the future. They also reflect, to one degree or another, the times in which they were made, and the specific fears that were prevalent at that point in history. The best ones linger in memory, long after cures are found or all hope is lost.