CONTAGION is well worth catching. 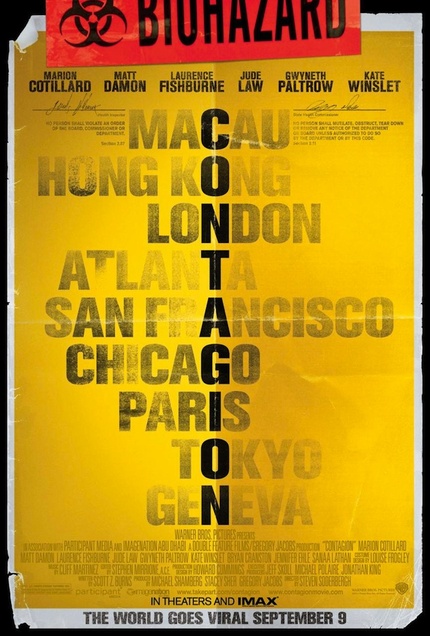 It's always interesting to watch the way audiences thwart marketers. Here is a movie that could not be less like Outbreak (1994) if it had to be. Yet one person after another has turned to me after watching the trailer and exclaimed, "Oh... they remade Outbreak." I'd be amused except that Steven Soderbergh's tense and realistic film not only deserves to be better evaluated but, more importantly, should be seen by anyone interested in how the world functions as a global village where lack of cooperation between the parts is far more dangerous than the problems that threaten the whole. Even more vital is the manner in which the film diffuses fears of apocalypse by showcasing them in everyday, rather than melodramatic terms. This is the biggest difference between Contagion and other disease outbreak films.

The plot is a virtual tour of the path disease outbreaks take and the puzzle they present to researchers, politicians and the average world citizen. Someone gets sick, dies. Soon others do. A pattern is recognized and government and medical agencies are involved. Politics then begins to complicate treatment options. In the case of true worldwide pandemic everything begins to break down.

Soderbergh could be accused of a somewhat dispassionate approach. Yes we get close-ups of a grimacing, dying Gwyneth Paltrow but the way he cuts between meeting after meeting and a host of disparate characters may leave some viewers shell-shocked. That is of course the point. Contagion is a curious hybrid. On the one hand there's no doubt that Contagion is being marketed, and even has some slight ambitions as, a mainstream medico-thriller but Soderbergh refuses to sacrifice his real agenda to genre mechanics. Rather than depend on twists and turns for dramatic tension he has simply done what the disease would itself do; hit every strata of society, ignore class lines and showcase the mundane, even maudlin response of people and governments to the inevitable effects.

Contagion should work powerfully for any viewer who understands that the true measure of how catastrophic an event like this would be is likely to be tallied in simple decisions individuals make about when and where their own humanity will break down. We see people who even in their sickness reach out to comfort others and many many others whose paranoia swallows them whole. Always in the offing seems to be the potential for something awful to happen. Yet this is not a film of explosions and car chases but of quiet desperation, weighing of right and wrong, emotional and psychological crossroads in moments of crisis.

Performances are understated throughout and barely need any praise. These are average people caught up in an extraordinary situation and one of the primary points that Soderbergh and screenwriter Scott Z. Burns are making is simply that this is what will happen someday. There will be no background music to tell us how to feel. No last minute institutional miracles. Yet they make that point using cinema as a tool to communicate rather than inspire emotionally. It's a risky move but they also go out of heir way to showcase hope. We are part of history, in larger near-sighted human terms that is all we are. If we are to hope, then we must hope in the face of certain death, of the dust that settles over everyone eventually. At times this film seems like a toned down seventies science fiction horror film ala The Andromeda Strain (1971) or Phase IV (1974) but that has more to do with how genuinely smart Contagion is rather than how scary.