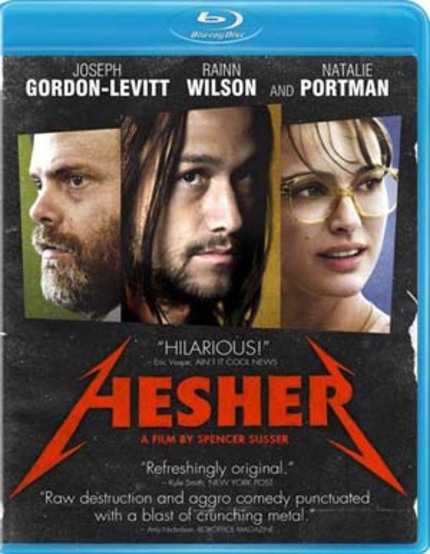 Loud music. Pornography. Burning stuff to the ground. These are a few of Hesher's favorite things. And they are what Hesher (Joseph Gordon Levitt) brings into the lives of TJ (Devin Brochu) and his father, Paul (Rainn Wilson) when he takes up residence in their garage uninvited. Grief-stricken by the loss of TJ's mother in a car accident, Paul can't muster the strength to evict the strange squatter, and soon the long-haired, tattooed Hesher becomes a fixture in the household. Like a force of nature, Hesher's anarchy shakes the family out of their grief and helps them embrace life once more.

This one split critics right down the middle, and I can see why. Hesher is a very tonally unstable film. This is not something that most people, certainly not film critics, are very friendly about. Critics want to be able to say, "this is a drama", or "this is a comedy", or "this film is great/sucks", you just can't do that with Hesher. I usually don't care for Rotten Tomatoes, but I compared Hesher with Visitor Q, a film that shares a similar device, and Hesher got 54% while Visitor Q is at 56%, so I guess at least critics are consistent.

Hesher is like an angel that descends into the lives of the downtrodden TJ, played with pathos beyond his years by Devil Brochu, and Paul, played by an unshaven and disheveled Rainn Wilson who is making a habit of playing unstable sad sacks in films this year.  Only rather than descending on a beam of light, he comes down Old Testament style, in a roar of flames and destruction to help/hurt/whothefuckcares the family that is reeling from the very recent loss of its matriarch.  The mysterious stranger film is not new, above I mentioned Visitor Q, but the film also has it's counter culture roots in Pier Paolo Pasolini's Teorema, shit, even Dr. Seuss's The Cat in the Hat is a perfect model. The stranger enters a home, fills it with chaos a little bit at time, and then leaves, and in the cathartic rebuilding, the family heals itself. The main difference between those stories and this one, is that I know these characters, they exist.

The star and namesake of the film is Joseph Gordon-Levitt, AKA Hesher.  He is squatting in unfinished buildings as the film begins but soon takes up residence in TJ's home in rather spectacular fashion.  JGL's Hesher is a thing of beauty, and a person I know well. I've been the victim of the squatting metalhead back in my younger days. They ride into down, sometimes even on trains, and shack up with local floozies.  Unfortunately, this floozy was my roommate, which meant this Hesher became my roommate.  Now, JGL's Hesher is surely a more benevolent soul than my old festering sore, but they were both spectacular to watch in their disregard for good taste and manners.

Hesher isn't a fantasy, though to some the world and characters that are its inhabitants may seem fantastical, it is, however, unlikely, which is why it is so fascinating.  What if these characters met in real life, how would they interact? Would Hesher's heart grow two sizes? Would Paul straighten up his act and fly right? Would TJ feel that he'd gotten closure? Honestly, I think the film has a lot to say and it finds hilarious ways of delivering it's message, mainly through Hesher's wildly inappropriate anecdotes, and that made it fun. The tonal swings will give you whiplash, but if you're cool with that, you'll have a rockin' good time.

Lionsgate delivers another solid disc with Hesher.  The image quality is very good, no flashy visual to make you ooh and aah, but plenty of good action, fire, and low light shooting to test out the transfer.  It passes.  Far more impressive that the video is the DTS-HD 7.1 audio track, which utilizes the entire sound field in a very effective way.  My only issue was that perhaps some of the dialogue was a bit buried in the mix when it should have been more front and center.  The bursts of Kill 'Em All-era Metallica are lovely, rather than punishing, which is a mild disappointment, but probably good for the casual viewer.

Another decent set of standard extras from Lionsgate on the Hesher disc.  No commentary this time around, but there is an interesting Behind the Scenes look at the film with all of the actors and principal crew.  It is far too short, but not the worst I've seen.  There are also deleted scenes (nothing worth saving), and outtakes (some of which are pretty funny), and a compilation of takes from one day's shooting that are ruined by overhead airplane noise.  This was probably the most useless thing I watched all week.  Only for you, dear readers.

Liosngate's Hesher Blu-ray is a solid release of a great film, though one that can be a bit tough to grasp.  You guys can roll with the punches, though, right?  Dig in!

Pre-order Hesher on Blu-ray from Amazon