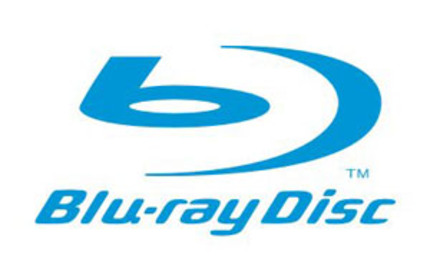 [See late additions Pulp Fiction and Jackie Brown at the bottom.  No pre-order links yet for those.]

Following up on my enthusiastic announcement of Peter Jackson's Dead Alive coming to Blu-ray, a new batch of highly anticipated Blu-rays have appeared on Lionsgate's fall schedule. 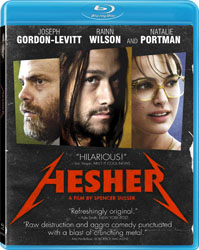 First up, a new release, Spencer Susser's Hesher.  The film got decent theatrical play, and polarizing reviews.  Based upon what I've read, I'm inclined to think I'll rather like this one, plus, I love Joseph Gordon Levitt.  If I had to fuck a guy, it'd be him:


PROGRAM DESCRIPTION
Featuring an all-star award-winning cast, Lionsgate debuts Hesher on DVD, Blu-ray Disc, Digital Download and On Demand this September. Joseph Gordon-Levitt (Inception) leads the dark comedy in the title role, an unconventional loner who is more interested in pyromania than finding a job.  Also starring Rainn Wilson (TV's "The Office"), Devon Brochu (In the Valley of Elah) and Oscar® winner Natalie Portman (Best Performance by an Actress in a Leading Role, Black Swan, 2010), this dark comedy meets fairy tale was a film festival favorite - an Official Selection of South by Southwest, and nominated for the Grand Jury Prize at Sundance in 2010.  Hailed as a "delectably anarchic black comedy...refreshingly original" (New York Post), the film features the music of Metallica. Hesher, featuring deleted scenes, outtakes, cast and crew interviews, a sketch gallery and more, will be available on September 13th for the suggested retail price of $28.98 on DVD and $29.99 on Blu-ray Disc.

Loud music.  Pornography. Burning s*%t to the ground.  These are a few of Hesher's favorite things.  And they are what Hesher (Gordon-Levitt) brings into the lives of TJ (Brochu) and his father Paul (Wilson) when he takes up residence in the garage uninvited.  Grief stricken by the loss of TJ's mother in a car accident, Paul can't muster the strength to evict the strange squatter and soon the long-haired, tattooed Hesher becomes a fixture in the household.  Like a force of nature, Hesher's anarchy shakes the family out of their grief and helps them embrace life once more. 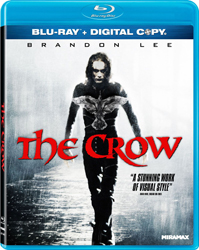 Next up is Alex Proyas and Brandon Lee's cult favorite, The Crow.  This film has been on Blu-ray in crappy editions all over the world, but the US release from Lionsgate sounds really outstanding:

PROGRAM DESCRIPTION
Lionsgate debuts Miramax's cult-classic, supernatural thriller The Crow on Blu-ray Disc for the first time this October.  Directed by Alex Proyas (Dark City), the film, based on the comic book series and comic strip by James O'Barr, with a screenplay by David J. Schow and John Shirley, stars Brandon Lee (Rapid Fire) in his final performance.  Called "A dark, lurid revenge fantasy," (The New York Times), the film also features a stellar soundtrack including The Cure, Stone Temple Pilots, Rage Against the Machine and more.  The high definition debut of The Crow hosts an audio commentary with producer Jeff Most and screenwriter John Shirley, a behind-the-scenes featurette, extended/deleted scenes plus storyboards and photo galleries - as well as a digital copy of the film.  The Blu-ray Disc will be available on October 18th, for the suggested retail price of $19.99.

A poetic guitarist Eric Draven (Lee) is brought back to life by a crow a year after he and his fiancée are murdered on the eve of their wedding. The crow guides him through the land of the living, and leads him to his despicable killers. One by one, Eric gives these thugs a taste of their own medicine. However their leader Top-Dollar (Michael Wincott, The Diving Bell and the Butterfly), a world-class crime lord, will soon learn the legend of the crow and the secret to the vigilante's invincibility. 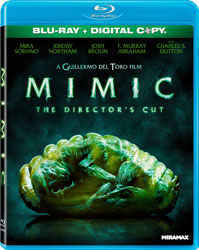 Next up is another really interesting sounding release of Guillermo Del Toro's early horror gem, Mimic.  This new release will feature an unseen director's cut, as well as tons of new bonus features.  I really enjoyed this film, which doesn't get much credit these days.  One thing that even the haters can't hate is the rather ingenious creature design, which really impressed the hell out of me:

From Master Of Horror Guillermo Del Toro Available For The First Time
MIMIC: THE DIRECTOR'S CUT

PROGRAM DESCRIPTION
Audiences will experience High Definition thrills as Lionsgate debuts Guillermo Del Toro's never-before-seen director's cut of Mimic, available for the very first time anywhere, on 1080P High Definition Blu-ray Disc.  This all new cut of the film, featuring seven minutes of restored footage, introduces subtle character moments that transform Mimic into a film that Del Toro fans and newcomers alike will embrace as the definitive version.  Containing new bonus materials created especially for this release, the disc includes audio commentary and a video prologue from Del Toro plus three featurettes; a look at the creatures from the film, a behind-the-scenes retrospective on the shooting of Mimic and Del Toro discussing his vision of the film and how he completed this version, as well as deleted scenes, a gag reel and storyboard animatics.  Mimic: The Director's Cut stars Academy Award® winner* Mira Sorvino (Mighty Aphrodite) and Academy Award® nominee* Josh Brolin (No Country for Old Men) along with Jeremy Northam (Showtime's "The Tudors").

Directed by Oscar® nominee Del Toro (Best Writing, Original Screenplay, Pan's Labyrinth, 2006), the Miramax film Mimic: The Director's Cut features a screenplay and screen story by Matthew Robbins & Guillermo Del Toro and is based on the short story by Donald A. Wollheim.  This "heart-pounding!"(ABC-TV) sci-fi thriller will be available on September 27, 2011 for the suggested retail price of $19.99

A disease carried by common cockroaches is killing children in Manhattan. In an effort to stop the epidemic, entomologist Susan Tyler (Sorvino) creates a mutant breed of insect that secretes a fluid to kill the roaches. This mutant breed was engineered to die after one generation, but three years later Susan finds out that the species has survived and evolved into a large, gruesome monster that can mimic human form. 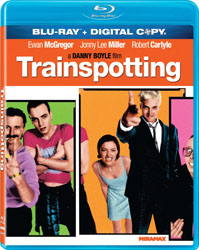 Also up for official Blu-ray release for the first time in the USA is Danny Boyle's breakthrough international hit, Trainspotting.  It wasn't Boyle's first film, but it was the one that introduced him to the world, along with Ewan McGregor, and the rest of its colorful cast:

PROGRAM DESCRIPTION
The film that launched the careers of Golden Globe® nominee* Ewan McGregor and Oscar®-winning director Danny Boyle** makes its HD debut as Lionsgate releases the dramatic Miramax movie Trainspotting for the first time on Blu-ray Disc.  Presented in 1080P High Definition and 5.1 DTS-HD Master Audio, the film portrays the misadventures of a group of heroin addicts in the late 1980's in Edinburgh, Scotland. The film also stars Ewen Bremner (Match Point), Jonny Lee Miller (Showtime's "Dexter"), Kevin McKidd (TV's "Grey's Anatomy"), Robert Carlyle (TV's "SGU Stargate Universe") and Kelly Macdonald (Harry Potter and the Deathly Hallows: Part 2). Based on the novel of the same name by Irvine Welsh (The Acid House), the film earned an Academy Award® nomination for Best Adapted Screenplay for screenwriter John Hodge (The Beach). Available on September 13th, the Trainspotting Blu-ray Disc will include audio commentary, deleted scenes, a "making of" featurette, gallery, interviews, a film retrospective - plus a Digital Copy version of the feature film - for the suggested retail price of $19.99.

The film follows the life of Mark Renton (McGregor), a heroin addict who struggles with his addiction.  Renton is able to kick the habit and moves to London, where he finds a job, a flat, and something close to peace of mind. However, old friends Sick Boy, Begbie and Spud all arrive at his doorstep, leading Renton back into drugs and crime. Renton's lifestyle starts to significantly affect his relationships with his friends and family. He reluctantly discovers that his old friends continue to play a part in his life and make changing a difficult task.

* Best Performance by an Actor in a Motion Picture - Musical or Comedy, Moulin Rouge!, 2002
** Best Achievement in Directing, Slumdog Millionaire, 2008

Quentin Tarantino's early classics Pulp Fiction and Jackie Brown are also on Lionsgate's October schedule, and some details have appeared, check out the cover art and special features below, first, Pulp Fiction: 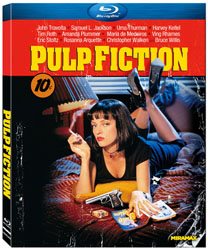 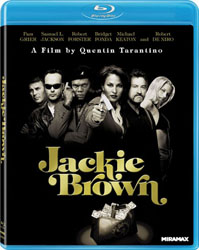 Lionsgate are also delivering some other great non-genre titles on Blu-ray in September and October including Life Is Beautiful, and their releases have been very good overall.  I look forward to hopefully checking these out and delivering verdicts for you when they are released.  Check out the pre-order links below.

Pre-order Hesher on Blu-ray at Amazon

Pre-order Trainspotting on Blu-ray at Amazon