J Hurtado
Editor, U.S. ; Dallas, Texas (@HatefulJosh)
Tweet Post Submit
[Just to clarify, this contest is for BOTH DVDs, not either or.  You only need to enter once, the winner will get Super & Stake Land]

Today's been a busy day for my inbox, and I'm about to sign my own death warrant, but I can't keep these discs from you loyal readers any longer!  The final Labor Day Giveaway discs come from IFC Midnight, first up is James Gunn's Super:

When sad-sack loser Frank (Rainn Wilson, The Office), a short-order cook, sees his ex-addict wife (Liv Tyler, The Lord of the Rings) willingly snatched away by a seductive drug dealer (Kevin Bacon), he finds himself bereft and unable to cope. But he decides to fight back under the guise of a do-it-yourself superhero called Crimson Bolt. With a red hand-made suit, a wrench, a crazed sidekick named Boltie (Ellen Page, Juno) and absolutely nothing in the way of superpowers Crimson Bolt beats his way through the mean streets of crime in hopes of saving his wife.

Following that is the hit Vampocalyptic-thriller, Stake Land: 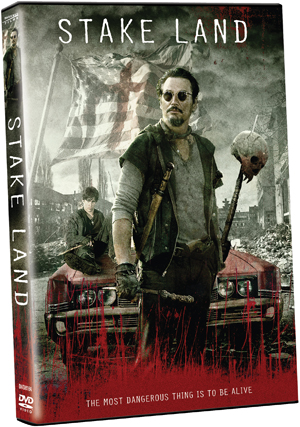 America has fallen. A vampiric scourge sweeps the nation, turning brother on brother and parent on child as the blood-hungry beasts take deeper and deeper hold upon the land. It's hard for the survivors to know whether to be more afraid of the creatures themselves or the violent religious groups that have sprung up in response, but there is clearly only one choice: fight or die.

Connor Paolo (GOSSIP GIRL) stars as Martin, a young man traveling with only his taciturn mentor - a hardened fighter known simply as Mister - as protection against this blasted earth in search of the rumoured safe haven of New Eden. Winner of the Midnight Madness Award at the Toronto International Film Festival and hailed as "the American horror film of the year" (Todd Brown, ScreenAnarchy.com), STAKE LAND establishes director Jim Mickle as a leader in the new generation of horror.

Just like the two previous contests, all I need is an e-mail from you saying you want them!  You need to be sure that you specify in the subject line which giveaway you are asking for.  Yes, you may enter all three.  No, you will not win all three.  Yes, you must send me a separate message for each contest.  Get to it!

Do you feel this content is inappropriate or infringes upon your rights? Click here to report it, or see our DMCA policy.
Jim MickleNick DamiciConnor PaoloGregory JonesTraci HovelDramaHorrorSci-Fi

Send me an e-mail at josh[at]twitchfilm.net with "IFC Midnight Giveaway!" in the subject line.