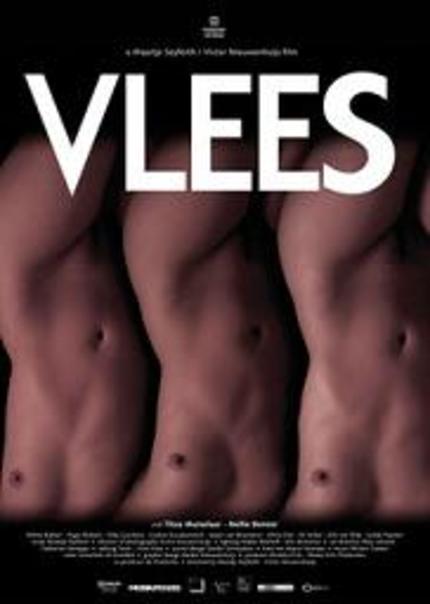 Victor Nieuwenhuijs and Maartje Seyferth's bizarre, chilling little character drama Meat certainly covers all the bases. Nearly every major synonym, metaphor or other interpretation of that one word is in there somewhere. Mostly it seems to be about people who've lost, or think they've lost the capacity for emotional attachment - obsessing over the flesh versus the spirit, if you like - but Meat also looks at appetite in general, the way our carnal impulses overrule our better judgement, and what these things can drive us to do. Some of this comes out through how characters communicate, but while there's no graphic violence as such it's a pretty explicit film - plenty of the human body on display, as well as animal carcasses hacked to bits. The low budget hampers its ambitions, and sometimes it's simply too obtuse and convoluted to manage the impact it ought to have, but if you can take the weight of these petty, emotionally stunted individuals struggling through their lonely lives Meat is still a haunting, unsettling piece of work.

The story involves two roughly parallel plot threads. A nameless butcher (Titus Muizelaar) can't find a woman who wants to return his affections; he dotes on the prostitute who calls on him at work, but she's beholden to her pimp and doesn't seem to acknowledge how deeply the butcher feels for her. Unable to make that happen, he turns to his assistant, Roxy (Nellie Benner), a pretty young thing whose resistance to the butcher's overtures might be hiding more than simple reticence or distaste. Police inspector Marin (also Muizelaar) is an ageing cop tired of his useless, flabby frame, consumed by ennui, indifferent to his wife's problems with their marriage or his mother's efforts to communicate. When he's called on to investigate Roxy's relationship with the butcher after an unexplained death, Marin finds himself caught up with her story in ways he wasn't expecting.

Setting things out like that probably makes the film out to be a cheap slasher flick or erotic thriller, but this is prime arthouse territory through and through, told through oblique camera angles, stilted two-handers consisting of little more than elliptic dialogue, blunt-force symbolism and explicit sexual come-ons. People rarely interact like normal human beings would, or do anything that ties them to the real world. Roxy films the butcher and his paramour screwing in the meat locker, then ends the tape with slow, loving pans across trays of offal. Inspector Marin walks away from a tragedy the fallout from which would occupy the next few months of his life, and it's never referred to again. Dreamlike situations are treated at face value, and conversations with patently obvious conclusions devolve into awkward silences seemingly for the hell of it.

On the other hand there's clearly purpose and subtexts rooted in identifiably human failings under this layer of contrived psychological theatre. Meat is a world away from, say, the infamous 'I got the results of the test back' in cult disaster The Room - it's more the kind of thing that might result if Reha Erdem set out to make a porn film. You might feel it would be more plausible if individual characters just gave vent to whatever aggravation's currently eating away at them but you can understand, at least in theory, why they don't and often that understanding is still plenty powerful by itself. The butcher and Marin are tormented by their failing bodies; the butcher's caught up with the need to possess, to dominate to make up for his being an old man who can't land a partner any other way, and Marin's enchanted with the idea someone's finally shaken him out of his funk.

The coldly explicit visuals also have a rough, filthy grace of sorts, although Nieuwenhuijs and  Seyferth can't quite turn the lo-fi camerawork into something really artistic - Meat is never much more than eighty minutes of rough DV footage, and the occasional experiment like several minutes of sped-up POV night-vision cross into unintentional comedy. Still, while there's arguably some titillation to the nudity - a camera angle too revealing here or a movement too extrovert there, nothing like the genius of A Snake of June or the bravery in Elbowroom - the sheer physicality to the sex scenes and the way in which the leads strip down, naked and yet closed off more than ever, definitely carries real dramatic weight. When they have sex their characters are almost bridging the gap between each other, just short of being able to lay a finger on what's driving them or holding them back from resolving their neuroses, and yet they still can't quite reconcile these things with the needs of the flesh.

Meat is theatre, but it's raw, confrontational guerilla theatre. It deals in abstracts rather than talking about characters who are instantly recognisable as real people, but its cast are talented enough and its artistry expressive enough you can look at the pictures it shows you, or the choices its characters make, and more than likely see something of your own suppressed longing or frustrations in there. The film never completely resolves any of the questions it raises, and the lo-fi visuals look a little too thrown together in places, particularly a later piece of procrastination that comes off like a video installation from two decades ago or more. It's not a film for anyone who easily tires of arthouse ambiguities. But its cobbled-together, high art shock aesthetic contains some genuinely memorable imagery and searching lines of inquiry. If you want a gruesome, disturbing yet oddly meditative little tone poem to get you thinking, consider Meat recommended.

(Meat was screened as part of the 17th L'Etrange Festival at the Forum des Images in Paris, run from 2nd-11th September 2011.)
Tweet Post Submit