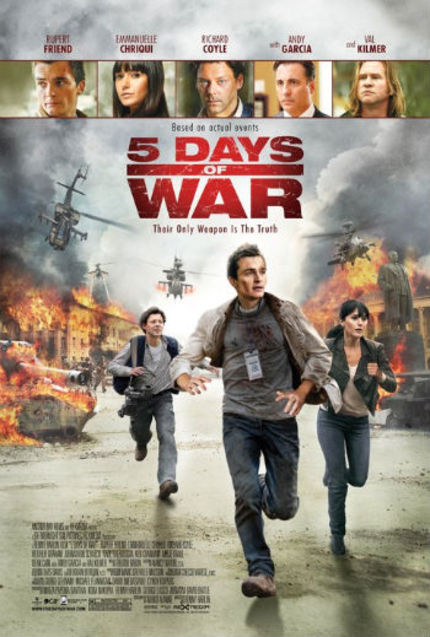 He's always been less a popcorn filmmaker than a Cracker Jack entertainer, rarely content to leave a scene alone without adding unnecessary ingredients to sweeten and / or salt the deal. It delivered him from sequel hell in A Nightmare on Elm Street 4: The Dream Master, which led to the big-budget insanity of Die Hard 2. It helped him survive The Adventures of Ford Fairlane and Cutthroat Island, so that they recede into indistinct memory as the cheesy, indulgent, thrilling excesses of Cliffhanger and The Long Kiss Goodnight and Deep Blue Sea are remembered more fondly.

Over the last decade, however, Harlin's track record has become more suspect, even for those with a soft spot for mainstream Hollywood product. Driven wasn't as good as it needed to be, Mindhunters was a confused mess, The Covenant supremely disappointing, and 12 Rounds strictly routine.

So in the sense that 5 Days of War provides more of the guilty pleasures that Harlin's best work once supplied in abundance, it can be considered a return to form. Of course, it's Harlin's indulgence in hammering overkill that makes the pleasures guilty, especially when the movie concerns the real-life conflict between Georgia and Russia in 2008, as war atrocities may have been committed and the world community was preoccupied with the Beijing Olympics. Harlin has not tackled such a serious subject before, but it seems to have inspired him to new heights of creativity in several sequences.

For example, there's a marvelous scene where Thomas Anders (Rupert Friend), a freelance American broadcast journalist, steps out of a modest farmhouse where he, his cameraman Sebastian Ganz (Richard Coyle), and Tatia (Emmanuelle Chriqui), a Georgian schoolteacher, have taken refuge. They have traveled through dangerous country, in search of Tatia's father and sister, and so far it has been stressful to the point of total exhaustion. As the others sleep, Thomas picks a piece of fruit fresh off a tree and takes a bite. As he chews, he looks around at the blissful calm of a peaceful country morning.

And then a deep rumbling begins, and the ground begins to shake, and Thomas looks around in a state of panic as his eyes confirm what his mind suspects: tanks, and trucks, and armored personnel carriers, and soldiers advancing over the horizon, and helicopters buzzing above. Thomas runs back inside to rouse the others so they can flee for their lives.

It's a potent mix of sound and visuals, and it's as good as anything Harlin has done, right up there with the airplane tragedy in Die Hard 2 or the rescue attempt at the beginning of Cliffhanger or nearly the entirety of The Long Kiss Goodnight or Samuel L. Jackson's speech in Deep Blue Sea.

That sequence, however, is too brief to save the movie as a whole. Risibly simplistic in its notions of good and evil, and of what conduct constitutes heroism and what defines villainy, 5 Days of War is sunk by the script, attributed to Mikko Alanne. The film settles for easy irony instead of complex characterization. It complains that CNN and other cable news channels unfairly present only one side of the story -- and then proceeds to tell only the other side of the story, and proclaim that it alone is telling the truth.

I like my Nazis to be more nuanced. If you want to portray the villains of the piece as manifestations of absolute evil, fine. Just don't expect anyone to believe it as anything more than a fictional construct. Even if you can put aside the issues of truth, fiction, fairness, and advocacy, 5 Days of War remains a moldy collection of stereotypical war stories bolstered by two or three really fine action sequences.

For the record, Val Kilmer makes a spirited appearance that is barely more than a cameo. Andy Garcia plays the Georgian president with little finesse; Dean Cain has a few lines as his US press liaison. Heather Graham has a cameo. Johnathon Schaech is a friendly Georgian soldier. Rade Serbedzija is an unfriendly Russian colonel. The performances by the three leads are fine.

Rene Harlin can still construct dynamic and memorable action sequences. He just needs a good script to provide them with a viable reason for their existence and tie them all together.

5 Days of War opened in New York and Los Angeles last week. It expands today into other markets, including my home area of Dallas, Texas. Check local listings for theaters and showtimes.

More about 5 Days of War