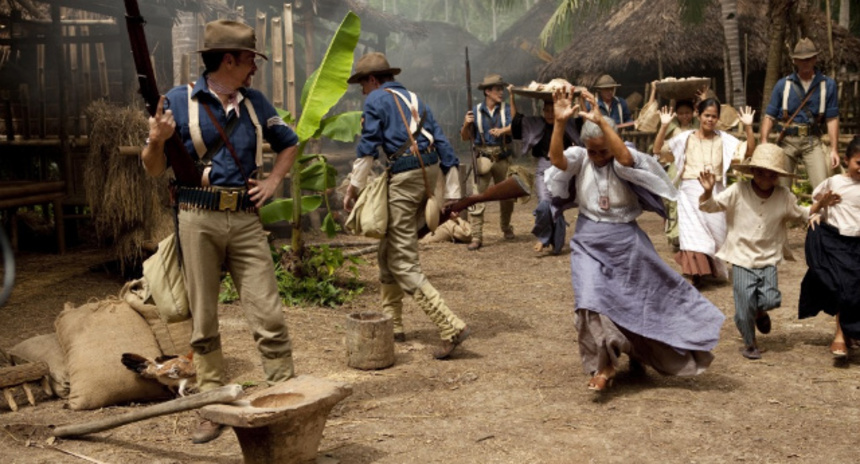 The year is 1900. The setting is a sleepy, small village in the Philippines. A group of American soldiers arrive to secure the area and rid of it any rogue elements. It's nothing new to the villagers of San Isidro. They've been under the Spanish rule, until recently. It's the same white people in different clothes (nice blue wool shirts and cream colored khaki pants, I might add). The man in charge of this barrio is Rafael (one of the biggest name in Filipino cinema, Joel Torre). He has a difficult task of pleasing both the occupying force and the rebels, in which his brother, Simon (Ronnie Razaro) and his young son are part of. Freed by the American soldiers, a Spanish priest (Yul Vazquez) becomes somewhat unreliable liaison for the occupying force. Lt. Compton (Garret Dillahunt) is an idealistic greenhorn who has to grapple with the band of unruly, uneducated, racist soldiers while trying to win hearts and minds of the villagers.

John Sayles has spent his career portraying stories based on important, neglected American history on film, and giving voice to the voiceless. In Amigo, his 17th feature, one small piece of the American Imperialism is at work in the South East Asia at the turn of the 20th century. This film, lacking a lengthy introduction or postscript, is not put in context; in other words, it is not your neatly packaged, easily digestible Hollywood historical drama and might be a hard sell to the general movie-going audience. It places a lot of responsibility on the viewers to look further into this history. At the base level, this well written film works as a searing human drama not dissimilar to other films about people under occupation, caught in the crossfire. I can't think of another American writer/director working today who can write as beautifully as Sayles.

As usual, Sayles leaves no stone unturned. Telling the story of survival and death from multiple points of view, he examines naked racism, manifest destiny, the hypocrisy of religion, the spreading of American "democracy" abroad, loyalty, friendship and more. His attention to period detail is quite amazing in Amigo. With the production designer Rodell Cruz, Sayles built a village entirely from bamboo and shot entirely on location with a mostly Filipino crew (and NO, this is not your Marcos-era exploitation film). There are 4 different languages spoken in the film- Tagalog, English, Cantonese and Spanish. He even finds time to highlight the Filipino culture in a religious festival scene and their national pastime, cockfighting.

Dillahunt as Lt. Compton is great as soft-spoken, learned soldier, who has the best intentions at heart and is beginning to doubt his mission. Chris Cooper chews up his limited screen time as a bigoted, bloodthirsty colonel with strong military conviction. But the real star of the film is soulful Torre as the man trying to do right by his people while being amigo to the oppressors and to the Insurrectos alike.

Sayles draws obvious parallels to America's present involvement in Iraq and Afghanistan with waterboarding (which originated from the Philippine-American War, called the "water cure") and the phrase 'winning hearts and minds'. The film beckons the viewer to find out more about these hidden American histories.

Dustin Chang is a freelance writer. His musings and opinions of the world can be found at www.dustinchang.com
Sign-In to Vote
Tweet Post Submit