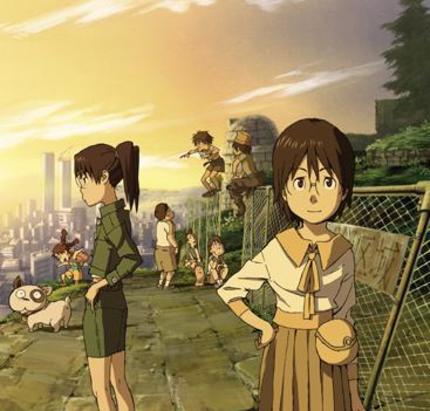 One of the recent big mysteries of the universe was the question why the Japanese animation "Dennou Coil" had not yet been picked up for English-language DVD distribution. The series has been out in Japan for years already, got rave reviews from critics and a loyal fanbase, and has been likened to the works of Studio Ghibli (even GhibliWorld's Peter van der Lugt has said a thing or two about that).

The story concerns itself with a group of children who live in a city which is mostly real, but parts are "augmented reality" which exists only in the Internet and for which you need special glasses to be able to see it. Using special (and often illegal) software the kids start solving problems in their neighborhood.

So the biggest anime news of this week (in my opinion) is that the wait is almost over. Australian distributor Siren Visual will be streaming the title in July, followed by a DVD release sometime in September. As far as I know this will be the first release outside of Japan for this series (please someone correct me if I'm wrong...), and certainly the first English-friendly one.

I have to say that Siren Visual are on a hell of a run this year. They've released noitaminA series "House of Five Leaves" , "The Tatami Galaxy" and "Welcome to Irabu's Office" (with "Bunny Drop" scheduled for later this year), and this very week they have released both "Kaiba" and "Welcome to the NHK".