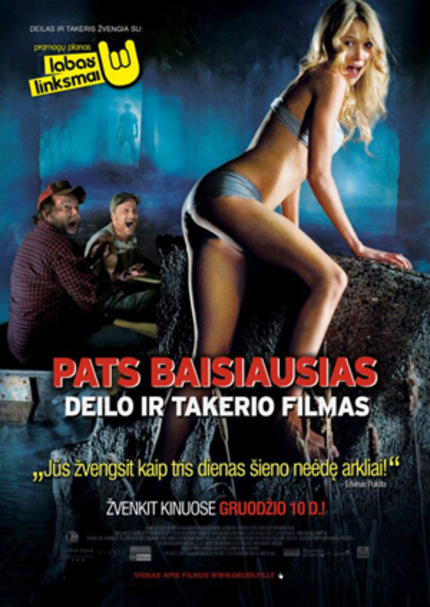 Some of 2010/2011's best, Twitchiest films have been picked up by Magnet Releasing.  In the last few months we've seen Hobo With a Shotgun and 13 Assassins, both due on Blu-ray/DVD next Tuesday, and in select theaters right now we have Troll Hunter.  For some companies that would be enough, but Magnet just keeps on rolling with several outstanding films that were in dire need of the wider recognition they will soon get.

First up is Good Neighbors, which is the only one of these films about which I know nothing.  The plot sounds interesting, though, and it is available on Magnolia VOD now, with limited theatrical release coming July 29th.

Synopsis:
Neighbors Spencer (Scott Speedman) and Louise (Emily Hampshire) have bonded over their fascination with a recent string of murders terrorizing their community. When a new tenant named Victor (Jay Baruchel) arrives in the building, all three quickly hit it off. But as they soon discover, each of them has their own dark secret. As the violence outside mounts, the city retreats indoors for safety. But the more time these three spend together in their apartment building, the clearer it becomes that what they once thought of as a safe haven is as dangerous as any outside terrors they could imagine. Smart dialogue, strong performances and jarring thrills give this film all the elements of a great mystery.

Next up is my top movie experience of 2011 so far, I saw it twice at Dallas IFF, The Last Circus.  Vastly under-recognized Spanish madman Alex de la Iglesia brings this story of jealousy, madness, and clowns in the waning days of the fascist Franco regime to limited theatrical release August 12th.

Synopsis:
1937, Spain is in the midst of the brutal Spanish Civil War. A "Happy" circus clown is interrupted mid-performance and forcibly recruited by a militia. Still in his costume, he is handed a machete and led into battle against National soldiers, where he single handedly massacres an entire platoon. This absurd and disturbing scenario raises the curtain on a twisted tale of love, revenge, and psychopathic clowns that could only spring from the mind of filmmaker Álex de la Iglesia.

Fast forward to 1973, the tail end of the Franco regime.  Javier, the son of the clown, dreams of following in his father's career footsteps, but has seen too much tragedy in his life - he's simply not funny and is only equipped to play the role of the Sad Clown. He finds work in a circus where he befriends an outlandish cast of characters, but as the Sad Clown he must take the abuse of the brutish Happy Clown Sergio, who humiliates Javier daily in the name of entertainment.

It is here that he meets Natalia, a gorgeous acrobat, and abused wife of Sergio. Javier falls deeply in love with Natalia and tries to rescue her from her cruel and violent husband, unleashing Sergio's jealousy. But Natalia is torn between her affection towards Javier, and her lust for Sergio.With neither man willing to back down, this twisted love triangle evolves into a ferocious battle between Sad Clown and Happy Clown, escalating to unbelievable heights in this absurd, shocking, irreverent and unforgettable film.
Official website
Official Facebook

The one that makes me the happiest is the recently announced acquisition of the incredibly funny backwoods horror satire, Tucker & Dale Vs. Evil.  The reason this is my favorite announcement is that the film sat undistributed for over a year and a half before Magnet announced their plans.  I can't wait to watch it again, and if you have any guts, you'll be there, too.  Tucker & Dale hacks it's way onto Magnolia VOD August 26th, and into theaters September 30th.

TUCKER AND DALE VS EVIL

Last on the list, chronologically, is Takeshi Kitano's return to the yakuza genre that made him the famous internationally, Outrage.  I haven't seen this one yet, but I will be seeing it in a few weeks, and the early word is that it is a return to form for Kitano.  Magnet will make Outrage available on Magnolia VOD October 28th, with a limited theatrical run beginning December 2nd.

Synopsis:
OUTRAGE: WAY OF THE MODERN YAKUZA - In a ruthless battle for power, several yakuza clans vie for the favor of their head family in the Japanese underworld. The rival bosses seek to rise through the ranks by scheming and making allegiances sworn over saké. Long-time yakuza Otomo has seen his kind go from elaborate body tattoos and severed fingertips to becoming important players on the stock market. Theirs is a never-ending struggle to end up on top, or at least survive, in a corrupt world where there are no heroes but constant betrayal and vengeance.

By the way, the above photo is obviously not Magnet's promotional artwork for Tucker & Dale, but rather the ingenious Lithuanian artwork.  Enjoy.