THE BEYOND Blu-ray Review 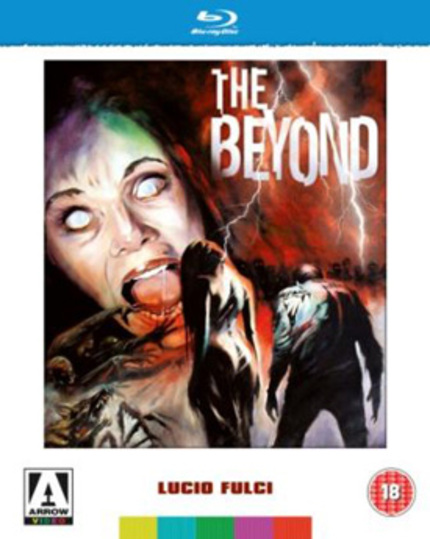 The Beyond is one of my very favorite films.  In my opinion, it is Lucio Fulci's masterpiece, better than anything he'd done before or after.  As such, I was ecstatic when Arrow Video revealed to me last Fall that they were taking it on in high definition.  The disc was actually released back in March, but due to a pretty embarrassing oversight (the opening being printed in black and white rather than the intended sepia-ish tone), I've waited to write this review until I got the real deal, which just happened on Monday.  Is it worth the wait?  Have Arrow Video done my favorite Fulci film justice?  My answer is yes.  While not perfect, The Beyond looks pretty incredible in high definition, and the overall package is amazing.

Here is how Arrow Video summarize the plot:

If your new business venture is sited on the cursed gateway to the hell dimension of The Beyond, then maybe it's time to move elsewhere but Liza (Catriona MacColl) is determined to make her New Orleans hotel work, until strange things start happening, people vanish and her waking thoughts are haunted by a ghostly blind woman who seems to hold the answers to the whole bizarre fever-dream. As reality breaks down and the plot explodes, Liza must journey far from everything she understands and descend in The Beyond...

I'll not bore you with a review of the film, I think my enthusiasm is enough on display already, but I will say that this is an amazing film.  Catriona MacColl and David Warbeck play off of each other wonderfully, and their chemistry is very apparent in every scene they share.  The gore set-pieces are astounding and among some of the very best ever filmed.  The overwhelming sense of dread that permeates the film is very effective in keeping the audience unsettled, even when things on screen may get a little bit loopy or corny.

Chances are, though, if you've read this far, you're more interested in Arrow Video's presentation than my opinion of The Beyond, so let's move on.

When the very first advanced reviews came out, the news that the film's prologue was in black & white was only part of the problem.  In addition, there were issues with the brightness level, and apparent issues with a low bit-rate.  I'm not one for measuring bit-rates, but I guess it was a visible issue.  The good news is that with this new pressing, the film looks outstanding.  The prologue is properly tinted, black levels are back where they should be, and the amount of detail is really outstanding.  The Beyond has never looked even remotely this good, not even theatrically, and the DVDs are way behind Arrow's new HD presentation.  The only minor glitch remaining is a moment where about a half dozen frames repeat during an eyeball plucking, but I only saw that because I was looking for it, I don't think it will affect any future viewings for me.

The audio options are also great!  The DTS-HS MA 5.1 track is amazing.  The surrounds are very active and keep the viewer fully engaged in Fulci's world by using the entire sound field rather than just the original Dolby Stereo track.  The stereo tracks are in there for purists, both English and Italian, but I strongly suggest trying out the surround sound, it is really good.

The Beyond has never looked and sounded this good.

Now, onto the extras.  Wow.  Arrow Video have really outdone themselves this time.

We start off with the dual commentary tracks.  The first is an archive track from Anchor Bay's first DVD of The Beyond featuring Catriona MacColl and the late David Warbeck having a wonderful time and sharing tons of great stories about the shoot and Fulci himself.  This track is a must have, and I'm very glad they were able to license it for this release.  The other commentary is shared by Antonella Fulci, Lucio's daughter, and Callum Waddell, who works with High Rising Productions, the producer of all original content in this package.  This track is also engaging, but suffers a tiny bit from Antonella's accent.  It is intelligible, but can be tricky to understand occasionally.  One thing I didn't like about the commentaries was the inability to watch the film with subtitles while listening to the commentary.  I do that often, but for some reason, the disc is mastered so that the commentary tracks are inaccessible from the audio menu and must be accessed from the extras menu, and as such, subtitles are not available.  Weird.

Rounding out disc one are a couple of half hour featurettes.  The first is with Cinzia Monreale (Emily) who talks about her experience with Fulci, and horror in general.  The second is in the form of a Q & A with Catriona MacColl from a Glasgow screening of The Beyond.  Both are very watchable and show the actresses' sincere fondness for Fulci, despite his reputation as a tough director for actors.

The second disc houses about 2 hours of additional material on a PAL encoded DVD (buyer beware to those of you in NTSC land).  There are four featurettes, all around thirty minutes each, and each approaching the film from completely different angles.  They are all fascinating.  The first is Beyond Italy, which is a look at Aquarius Pictures, who distributed The Beyond (as The 7 Doors of Death) in the US, and how the managed it, as well as otehr notorious films like Cannibal Ferox.  I really liked this one, it was a very interesting look back at the grindhouse days from someone who was very involved.  There is also Butcher, Baker, and Zombiemaker, which is a look at Gianetto di Rossi, the SFX artist on The Beyond and others.  The featurette looks at all of his work with Fulci while he gives a behind the scenes look at how it was all accomplished.  Very interesting stuff, I love behind the scenes gore stories!  The last two are a bit more conventional, with a 30 minute conversation with MacColl and another 30 minute featurette in which many members of the Italian horror community put in their two cents about Fulci, including MacColl, Dario Argento, Daria Nicolodi, and others. It is a very sweet piece, if perhaps a bit too fluffy.  Finally, the on-disc extras conclude with the original international trailer and the alternate pre-title sequence in color.

Then there's the box.

As usual, Arrow Video have provided 4 choices for cover art to be displayed in their customary windowed slipcase.  For this release, I rather like the original art, since my choice from the Grindhouse rerelease in '97 wasn't an option.  There is also a fold out, two-sided poster featuring the original art on one side and the Italian one sheet on the other.  Last, but not least, is a booklet with an introduction from Eli Roth and an long essay by Calum Waddell.  All very worthwhile reads.

Overall, The Beyond is incredible.  The film looks astounding, the presentation and packaging are amazing, and I'm a happy camper!

Arrow Video's The Beyond is available on all region Blu-ray disc now.  For more information regarding the disc replacement plan for those who receive an incorrect copy of the film, follow the link below.

Order The Beyond on Blu-ray at Amazon UK.